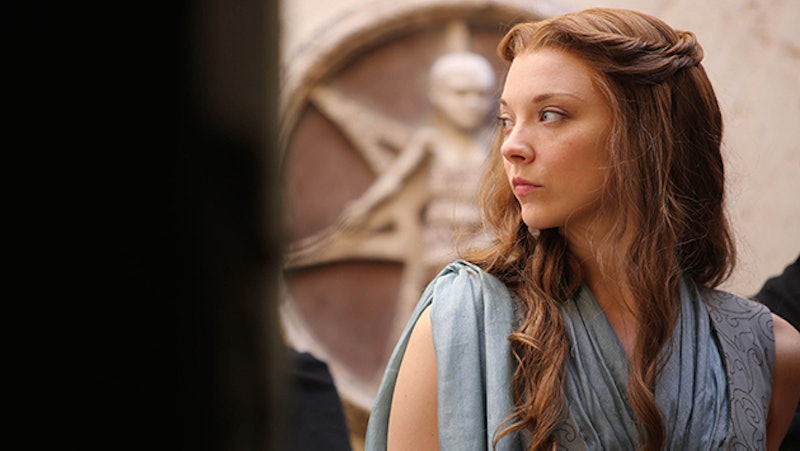 She went through a lot in the fifth season, and it looks like there's even more in store for Margaery Tyrell in Game of Thrones Season 6. In case you forgot, the character — played by Natalie Dormer — was imprisoned at the end of the Season 5 by her mother-in-law Cersei Lannister, who just so happens to be the mother-in-law from hell. In part because of her sparring with Cersei (and because she's a bona fide badass), Margaery has become a fan favorite. She has amazing outfits, a quick wit, and the ability to play the game of thrones better than many of the more powerful men around her.

From what Dormer's revealed about the upcoming season, there will be more badass Margaery to be seen on the show. While Dormer told The Australian that she's in a sticky situation at the beginning of the season — specifically, she described her character as “really f**king royally screwed” — she's also hinted in interviews that this season will see Margaery at her most cunning. "Margaery is a savvy chick and she’s trying to find an angle," she told Women's Health. "She’s trying to find a way to get out of that cell, so it’s pretty amusing and ingenious, the route she decides to take." With those hints in mind, we can probably theorize a little about what to expect from Margaery's Season 6 Game of Thrones plot. Here are a few possibilities:

It's possible she'll plan her own cunning escape and get out on the strength of her own wits. This is definitely supported by her description of Margaery as "savvy," and by the fact that Dormer has been spotted filming in what does not look like a prison cell.

In the book, Margaery is released from prison because of insufficient evidence. Though the circumstances of her imprisonment are altered on the show, it's possible that her fate will dovetail with hers in the book.

On most shows, this would be a no-brainer — but on Game of Thrones, all bets are off. While no one can guarantee that Margaery will survive the whole season, according to Den of Geek, Dormer did reveal that the results of her imprisonment were different from that of Anne Boleyn, the ill-fated historical queen whom Dormer has also played in Showtime's The Tudors. Boleyn was beheaded after her imprisonment, so it seems likely that the terms of Margaery's release won't be her death.

Working On Her Case

Margaery is in prison for lying under oath about her brother's sexuality, so her means of escape might be in proving that she did not lie. Her "ingenious" means might be more political and legal than a matter of physically escaping; that seems to be more her style, anyway.

Dormer revealed to Time that she'd have a new verbal sparring partner this season, and pictures have shown Jaime and Margaery on the same set. That would be a fun pairing.

Cersei was the one who imprisoned and made Margaery's life miserable for a while; since Cersei had fallen from grace in the last season, Margaery might find herself in the position to finally get revenge on her mother-in-law.

Another possibility for Margaery's new sparring partner is The High Sparrow, played by Jonathan Pryce, who is her keeper and might have been spotted on set with Dormer.