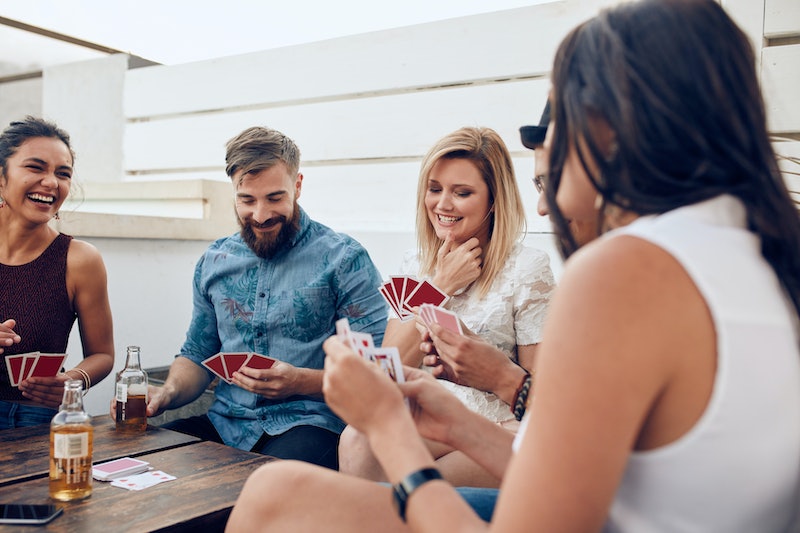 Remember the parent-chaperoned parties of yesteryear, when the most risqué (and most looked-forward-to) event was a soul-bearing round of "Never Have I Ever"? Those moments encouraged character-revealing conversations and strengthened bonds, all between bursts of soda-through-the-nose laughter. The best games to play at parties or on a night in can create that same feeling, but hopefully, they're now more enlightening than passing around a "check yes or no" note in homeroom.

Selecting the best game for you and your crew is pretty much an art form, as it has the ability to ever-so-gently break the ice. Whether your group has no problem sketching up a masterpiece or you'd rather determine which squad member is best equipped for an end-of-days scenario, there is a board game with your names on it. Instead of sitting around streaming old Netflix shows, turn your attention back to each other. With the correctly chosen game, you could learn everything about your pals, from who's the most up to date with street slang (like what exactly the "weird part" of YouTube means), to who knows the the most about the '90s. Ahead, nine games that can help everyone get the party started.

Turn The Conversation On One Another

The Voting Game: The Adult Party Game About Your Friends, $25, Amazon

You've always wondered which of your friends could survive the zombie apocalypse. Now, debate it with your crew! This 160-card game (for up to 10 players) presents you with questions like "Whose Google search history would you most like to see?" Players anonymously vote on the person who best matches the question, and then that person guesses who voted for the win. Users say it lets you find out a lot about fellow players — whether they're your closest friends or compete strangers.

Get Schooled In Youth-Centric Slang

If you've ever found yourself low-key researching what people are actually saying on Urban Dictionary's site, then you're about to get schooled in slang. Players compete by finding the best-possible definition for hashtags like #MyFirstDate (will it be "double rainbows" or "food boner"?), and for fans of Charades, you can act out answers, too. There are 330 definition cards for 81 prompts, so repetition's kept to a minimum. One fan of the game said, "My slang has never been better, and I have played this game often enough to reserve my place in Hell." If that's not an A-plus recommendation, I don't know what is.

The No. 1-backed project ever on Kickstarter, this card game works for five players, and its 56 cards feature witty illustrations by The Oatmeal, the comic artist who took the internet by storm. The game works like Russian Roulette, where players draw cards and hope they don't encounter an "Exploding Kitten" card, as that puts them out of the game. But you can avert the crisis if your deck's full of catnip sandwiches, belly rubs, and laser pointers. One fan said it's a light and fun party game: "Even those who don't play games will enjoy the simplicity, yet fun of Exploding Kittens." Bonus: If you're feeling edgy, check out the NSFW edition.

Embrace Your Dark Side

The now-classic card game that makes everyone into a horrible person, Cards Against Humanity has pretty much earned its place in every party-thrower's board game closet. In each round, one player pulls a Black Card with a fill-in-the-blank scenario on it, while the other players use their White Cards to create the funniest possible match-up as determined by the Black Card-pulling Judge. The player who creates the funniest combos by the end of the game wins — and usually it's a player with a penchant for dark humor and sarcasm. This particular set comes with 550 cards, which pretty much guarantees you'll never run out of cards in a single session. (Aka, this is a great investment, as the game dishes up new scenarios every time.)

Make An Artist Out Of Anyone

Telestrations After Dark Board Game, $27, Amazon

If you or your friends have sworn off sketching, think again. This party game works like an illustrated game of "Telephone." One player gets a word like "hand sanitizer" or "corner pocket," sketches it, and passes it on to the next person. That player looks at the sketch, guesses what it is, and then writes down their guess and passes. The next player illustrates the guessed word, and the game goes on. The worse off your drawing skills, the funnier it'll be, and users say it's absolutely hilarious. One said, "Even the most stubborn, self proclaimed non-artist/anti-board gamer person completely changes their tune and becomes obsessed with this game."

For fans of the '90s looking to kill time on their inflatable couch, this Goosebumps board game is everything you need for a nostalgic night in. Take on the role of your favorite monster and battle your friends to reach R.L. Stine's typewriter first. The rules are easy to learn, and though the instructions suggest ages eight and older, fans say younger kids in the family had no problem grasping the rules, either.

Game for Fame Party Board Game for Adults , $23, Amazon

If you swear you were one audition away from child stardom, let your inner celebrity have its day with the Game for Fame. It's a family-friendly competition for four to six players, featuring a stack of cards with different audition challenges that earn you points when you successfully act them out (like pronouncing complicated words with your tongue out). One fan of the game said, "Every single turn led to fits of laughter, and my wife even spit water high into the air as she burst out laughing when trying to gargle Christmas songs."

Let Your Inner Thespian Out

If your crew is full of theatrical characters, acting out scenarios could be the most fun way to break the ice. Give classic charades an unexpected twist with this high-rated game, where the twist is the whole team acting out the phrase for one player to guess. One user, who played with 20 people, said, "Describing toilet paper was the most funniest thing I ever saw. Excellent party game!"

Which side will you join: free-market competitors or monopolists? This board game gives the classic one a modern upgrade, where you pick a side, then play the game according to that side's rules. It's a real estate game for the 21st century, and it keeps all the players involved (even when it's not their turn). Users say it adds a whole different level of strategy to the game, and said it's "perfect for people who love the competitiveness of Monopoly but want a new challenge."