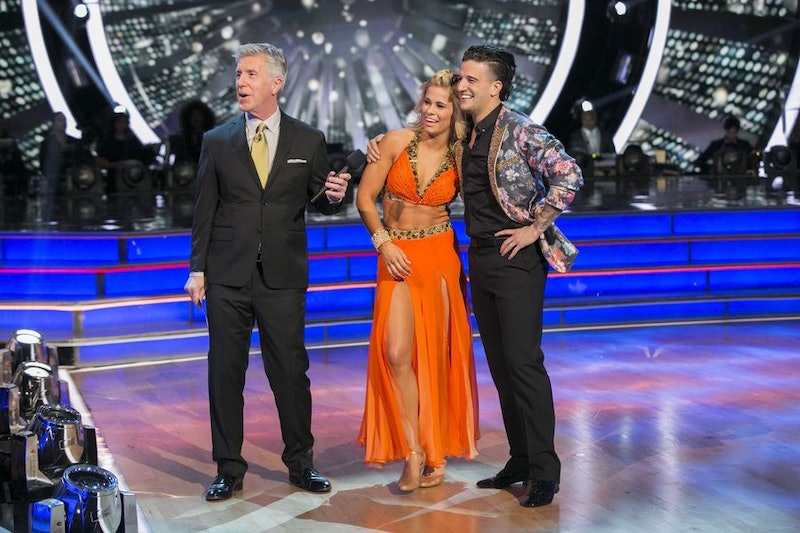 Two episodes in and there are already injuries on Dancing With The Stars Season 22! At the top of the episode, host Tom Bergeron pointed out to viewers at home that dancer Mark Ballas was not on stage with his partner, UFC fighter Paige VanZant, because he hurt himself in practice earlier this week. Is Mark Ballas too hurt to continue? That remains to be seen, as he doesn’t have full results yet, but Mark Ballas is definitely injured on Dancing With The Stars .

Here’s what happened: The day before the live show, Mark and Paige were working in rehearsals for the camera blocking of the show, and Mark flipped Paige through his legs and immediately stopped the whole rehearsal, saying that he “slipped a disc” and that he was in “real trouble.” Yikes! Back injuries are super scary to me, because you never know what the recovery time could be, and if Mark seemed that concerned — and he beats up his body for a living — it may be bad. Mark mentioned that he already got an MRI and was waiting on a CT scan and a bone scan and had yet to get the results, so hopefully Mark’s films will just call for some ice and maybe stimulation and a day of rest (I say only a day because nobody got time for more than that).

Thankfully for Mark and Paige, troupe dancer Allen filled in for Mark this time, and he and Paige absolutely rocked their dance and earned one of the highest scores of the night. Also in happier news, judge Len Goodman said that Mark’s choreography and Allen and Paige’s dancing was the “best of the season so far.” Bruno Tonioli and Carrie Ann Inaba were also thrilled with the performance. Mark and Paige seem hopeful of Mark’s prognosis, so here’s wishing that he’s back on the floor next week.