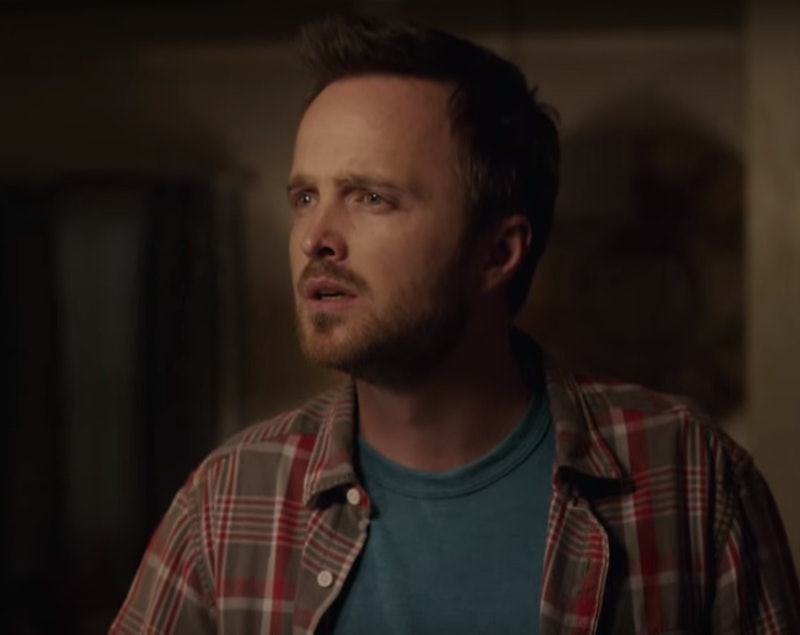 Hulu wants to recruit you into The Path , an original drama premiering on the streaming service on March 30. Hannibal actor Hugh Dancy stars as Cal Robertson, the leader of a "movement" called Meyerism. But, is the Meyerism cult real? According to the show, it's an upstate New York religious commune that attracts followers like married couple Eddie and Sarah Lane (Aaron Paul and Michelle Monaghan), but also the interest of the FBI. The trailer for The Path features imagery that I immediately associate with how cults are portrayed in movies and TV from Aquarius to Mad Men, including the Meyerists' secluded compound and its blissed-out acolytes dressed in flowing, brightly colored clothes. But, is The Path pulling from an authentic religious movement as well?

While I've enjoyed coming up with possible inspirations for a real-world version of Meyerism — the cult of Breckin Meyer, aka Travis from Clueless; the cult of Jonathan Rhys Meyers, the steely-eyed star of The Tudors — it's all in vain. At the Television Critics Association press tour panel for the show (as reported by The Hollywood Reporter), executive producer Jessica Goldberg clarified that Meyerism is a fictional religion created for The Path. "It wouldn’t allow us the same sort of storytelling opportunities if we put it into [a religion] that already existed," the showrunner said during the panel.

According to The Hollywood Reporter, Goldberg also specifically tackled the rumor that The Path's religion was allegedly a thinly veiled version of Scientology. "The Internet is full of misinformation," she told the press, citing, instead, her childhood in Woodstock, New York as the inspirational seed of the series.

Star Aaron Paul confirmed that there's plenty of drama to be found in an invented faith as there is in one that's already captured public interest. According to THR, the Breaking Bad actor said at the panel, "I find religion sort of fascinating. There's an endless amount of religions out there and everyone, as humans, [are] just desperately trying to find their questions to be answered."

In the show, Dancy plays the charming leader who claims to have the answers to some of those questions, though The Path catches Cal having his own crisis of belief. In an interview with Flavorwire, Dancy credits the show's creative team for making the show's fictional religious movement look real enough even to draw potential supporters. Apparently, a little graphic design goes a long way, according to Dancy.

You find little Meyerist pamphlets and articles around that they’ve just written because [the design team] take pride in it. And they’re really convincing. So we shot a scene in a park in Brooklyn, and we shot another scene, later on in the season, where there’s an outpost, a little Meyerist outpost that has its own little office and these posters on the front window, and the designs kind of draw you in. By the time I had got there, several people had stopped in and expressed interest in joining.

So, no, Meyerism isn't based on a real religious movement, but The Path aims to fascinate with its teachings and its members anyway.