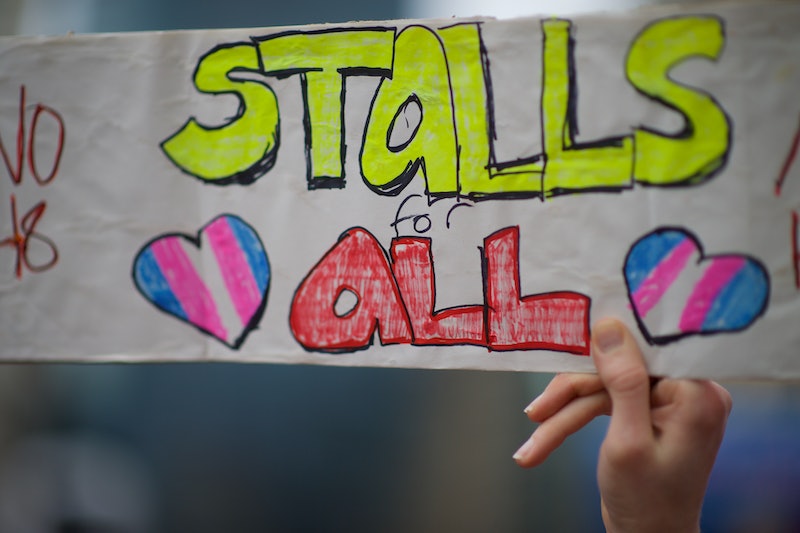 Last week, North Carolina passed House Bill 2, which prohibits the use of public bathrooms that don't match the sex on the user's birth certificate. This means many trans people can't use the restrooms they're safest and most comfortable in. But in an effort to help, web designer Emily Waggoner created a trans-friendly bathroom map for North Carolina. Using the Google service My Maps, Waggoner solicited the names of businesses that let trans people use their preferred bathrooms and added them to a Google map of North Carolina. As of the time this article was written, there were 85 options — a number which is growing as more users submit more locations. The map has been viewed over 50,000 times.

Waggoner, who grew up in Raleigh, NC, told Buzzfeed that she has trans friends there who have been affected by the new law. When she saw small local businesses announce their support for the trans community on social media, she wondered if there were a more concrete way to help those affected by the legislation. So, she started mapping the locations of the businesses that had declared themselves trans-friendly — and as she worked, more began getting in touch with her to be included as well. Using toilet paper roll illustrations as markers, the map displays bars, cafes, shops, and restaurants that accommodate trans people's preferences, linking to social media posts that prove their allyship.

When North Carolina governor Pat McCrory signed the bill into law, he said it would "ensure privacy." But restricting bathroom access actually puts the "privacy," health, and safety of trans people at risk.

For example, public schools can pose huge problems for trans people when bathrooms cannot accommodate them, with many students dehydrating themselves so they don't need to use the bathroom during school, or holding it in, which can lead to kidney and urinary tract infections. And of course there's the possibility that a trans person could get bullied or worse in a bathroom that doesn't match the gender they present as. One trans boy in South Carolina described being afraid to come out of a stall because girls were taunting him in the women's room. Even if trans people have changed the sex on their birth certificates, they may be afraid that police or laypeople will confront them for trying to use the bathroom, demanding to see documentation.

The bathrooms of 85 buildings are still not enough to help trans people feel safe wherever they are, and efforts to reverse the law are underway. As of now, the American Civil Liberties Union has sued several North Carolina lawmakers, arguing that the law is unconstitutional. McCrory's office released a statement calling the lawsuit a “continued distortion of the facts.” But while the legal dispute resolves, having a map at hand will at least make the process of finding a safe bathroom a little less difficult for members of the trans community.