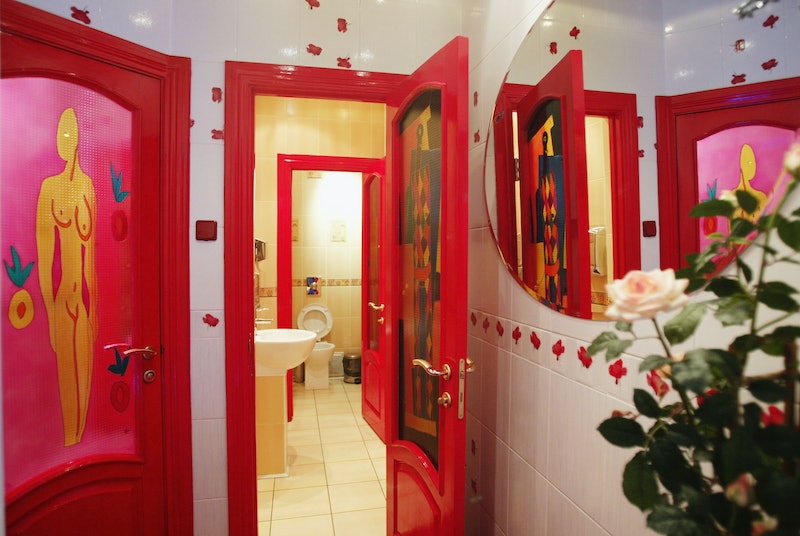 On Tuesday, Michelle Duggar, star of TLC reality show 19 Kids and Counting , voiced her opposition to a proposed nondiscrimination ordinance for the city of Fayetteville, Arkansas, via a robocall. In particular, she voiced her opposition to the part of the ordinance that prohibited discrimination on the basis of gender identity. Trotting out the tired cliché that trans women are simply men masquerading as women in order to infiltrate women's spaces, Duggar claimed that "males with past child predator convictions" would "claim they are female to have a legal right to enter private areas that are reserved for women and girls."

Apart from being a ridiculous claim, in places where similar anti-discrimination legislation has been passed, there have been zero incidents of such a thing happening. Furthermore, the assumption that it would happen relies on an assumption that trans women are inherently deceptive and predatory, and that they therefore should not be allowed in the bathroom corresponding to the gender with which they identify.

In general, I try to avoid using public bathrooms if at all possible, and because of the anxieties I have using many other sex-segregated facilities, I avoid places like gyms, pools, spas, and the like altogether.

Of course, these fears are both offensive and completely without merit. Experts on the matter call the reasoning "beyond specious." Why then, does the bathroom issue keep popping up? Well, sadly, these fears still get a lot of mileage in our society.

Even with increased trans visibility, a recent poll found that the majority of Americans oppose transgender people using the correct facilities for their gender. People are so terrified of trans people being predatory that some even oppose even 6-year-old trans children using their gender's facilities.

Despite the hand-wringing of transphobes, the reality of the situation is that even in places like Washington, D.C., which has some of the most explicit language in the country to protect transgender and non binary people, trans people are far more likely to face harassment or have negative experiences using the bathroom where they feel safest. And when quasi celebrities like Duggar use their platform to reinforce these harmful ideas, it only makes our battle for safety that much harder.

I don't think many people talk to actual trans people about how they feel when they use the restroom or any sex-segregated facilities. Personally, it's not something I enjoy. Even though no one ever misgenders me in daily interactions, and even though I have been transitioning for two years, I still feel a sense of paranoia using the women's restroom.

I'm not concerned about seeing the people in the next stall; I'm concerned about them seeing me. I'm worried I'll be harassed or assaulted or arrested. I feel this way despite having worked a job where my managers told me, their first transgender employee, that based on my presentation they preferred that I use the women's restroom.

In general, I try to avoid using public bathrooms if at all possible, and because of the anxieties I have using many other sex-segregated facilities, I avoid places such as gyms, pools, spas, and the like altogether.

I'm insulted that people like Michelle Duggar imply that my identity could be an act. It's clear to everyone who has known me pre-transition that I am now the most authentic and self-confident that I've ever been.

Regrettably, for a lot of people, it's easier to just decide that trans individuals are somehow freaks, or deviants, or disgusting. It means that they can feel like they know us without ever having to make any effort to actually get to know us. It's not just about the bathrooms, clearly, if even when we use them, we are at risk for abuse.

The mythology that dehumanizes us is ubiquitous in our society. From seemingly "innocent" and "light-hearted" songs on prime-time television to disgustingly transphobic screeds decrying (and denying) the validity of our existence, we face constant reminders that not only are trans people not welcome in spaces we identify as our own, but that we are not welcome anywhere. If my experiences receiving harassment for being a visible advocate for trans rights are any indication, then they don't want us to be heard, either.

This is precisely why media representation is so important. This is why there is no act of transphobia too small, and why it is important that we call Michelle Duggar out. Trans people deserve safe spaces, and they deserve to live without undue scrutiny, especially when the reasons for that scrutiny hold no water in the real world.

Despite Duggar's robocall, I do think that we have reason to be optimistic. Her efforts failed, and the nondiscrimination ordinance passed Wednesday by a vote of 6-2. Even so, I am hesitant to rejoice (beyond my happiness for the trans residents of Fayetteville) because I am confident that as more and more municipalities push to include nondiscrimination ordinances, there will continue to be this same sort of reheated backlash.

My hope is that eventually, if we keep calling out transphobia, cooler heads will prevail and our humanity will be taken as a given, rather than the idea that we are somehow lurking predators waiting for the opportunities a nondiscrimination ordinance would provide to strike.

Who we are is not going to change. And we shouldn't be expected to compromise our identities or subject ourselves to harm in order to pacify people who refuse to get to know us.