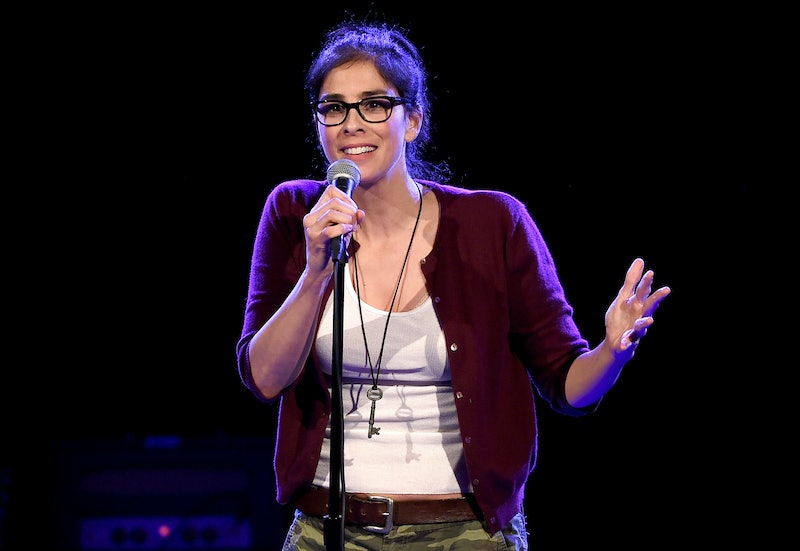 Ever since August 2015, when Sarah Silverman introduced Democratic presidential candidate Bernie Sanders on a stage in Los Angeles, the comedian has continued to advocate for him in a style that's all her own. On Tuesday, she posted the video "BERNIE SANDERS IS THE ONE FOR ME: Sarah Silverman explains," and it has the potential to pick up some serious momentum. It was unique because Silverman refrained from portraying Sanders as a victim of the supposedly undemocratic political process. She didn't mention how Hillary Clinton has already secured the majority of Democratic superdelegates, or how the media has "blacked out" Sanders' real delegate count, as some of his supporters allege. She didn't play the "but Sanders can win" card. Instead, she kept her spiel succinct, focusing on the candidate's own claim that he cannot be bought by big banks and corporate dollars.

Bernie Sanders is this senator from Vermont who miraculously has not and will not take money from Super PACs. Where all of the other candidates are getting gigantic sums of money from billionaires in an unspoken but inevitable exchange for favors and influence over policy, Bernie is not for sale.

While explaining why she believes Sanders is a better option for the presidency than Clinton, Silverman targeted the young feminists who support the #ImWithHer candidate and delivered the implicit message that Sanders, too, is a feminist:

Hillary had always been my choice. I'm a feminist. Democratic woman president? Yes please. But she takes a lot of money from big corporations and banks — the very people she says she's going to stand up to.

Furthermore, Silverman heightened her chances of convincing Clinton supporters in the first two minutes of the video because she didn't offend them or criticize their candidate of choice. Unlike the classic mudslinging style of campaign ad that politicians can't seem to put away, Silverman pointed out Clinton's willingness to take money from big banks without badmouthing her. Coming from a comedian, who has the right to make fun of candidates she doesn't like, that's a pretty big deal.

I'm not against Hillary. I just ... I met someone I have more in common with, and his name is Bernie Sanders.

Lastly, Silverman addressed the controversy over Sanders' affiliation as a democratic socialist. For once, it wasn't monotonous. With her signature humor, Silverman managed to put a fun spin on it:

Good Lord, don't worry. Under President Sanders, you can still become a rich asshole. It's just that your fellow hardworking citizens don't have to feed their children cat food in order for you to do it. Do you like firefighters? Is that something you like to have around? That's socialism.

Silverman is a unique figure in the political sphere at the moment. Though she tends to support more liberal-minded progressiveness, she's also been known to perform some politically incorrect and racially offensive skits that cross a line most establishment Democrats would condemn. For example, in a controversial episode of The Sarah Silverman Program, the comedian dons blackface to find out whether it's more difficult to be black or Jewish. Because it's been taken out of context by social media users, Silverman has admitted that she regrets what she now deems "an aggressively stupid" (even if it was intentionally so) episode.

Though her missteps aren't laudable, Silverman has managed to balance them with a willingness to change. For this reason, her behavior isn't always a dead giveaway of her political affiliation. She's a dynamic wild card. And that's what keeps her relevant and consistently interesting. Unlike older comedians who refuse to come to terms with changing social mores, Silverman has affirmed that people need to change with the times — which includes becoming more "politically correct." In a September 2015 interview with Vanity Fair, she advised America to turn to college-aged kids. According to her, they're the nation's best bet:

You have to listen to the college-aged, because they lead the revolution. They’re pretty much always on the right side of history.

It's no coincidence that Silverman's candidate of choice is also the most in-tune with that demographic of young, educated progressives. Though she's a generation ahead of them, her occasional crassness and refusal to comport herself in a way that's consistently politically correct conjures up a fanbase that's fed up with today's politics and is ready for something new.