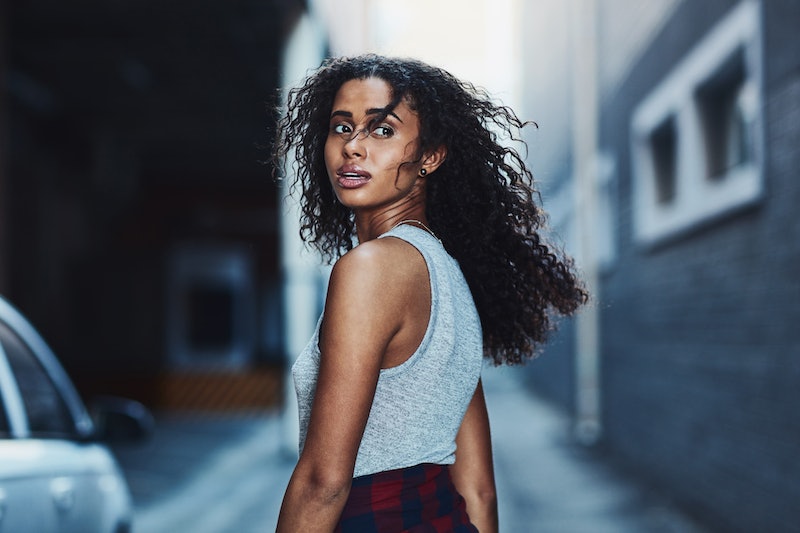 It doesn't matter who you are, where you're from (this sentence isn't going where you think it is, I promise), you've probably experienced catcalling in the street. Whether the depths of winter, when you're covered head to toe in coats, or the middle of summer when you're in shorts, catcalling does not discriminate. It happens no matter what you look like or what you're doing, and it's fairly inescapable, especially if you live in a big city like New York where the people apply sexual harassment in the street liberally. It's also the worst, and has the potential to make you feel like absolute crap when it happens to you.

We all have different thoughts when we're catcalled, but I'd venture to guess we've all felt a combination of things that lead to slightly similar things popping into our brains. Somewhere between annoyance, anger, fear, and frustration, catcalling conjures all sorts of terrible feelings that no one should have to feel. And yet we're generally powerless to do much about it, especially when we feel threatened and would prefer to remove ourselves from a situation rather than get on our soap box and start preaching, or otherwise cursing the catcaller out. Here are some thoughts you've probably had when you're being catcalled.

1. "If I Put My Head Down And Ignore It, Maybe It Will Stop"

The first thought that usually crosses my mind is the quickest way to make it stop. But as soon as I have that thought, I get angry, mostly because it never works (and obviously it shouldn't be my responsibility to find a way to "stop them" in the first place).

When you feel angry because of a catcaller's actions, you start thinking about action. I'll often try and think of the meanest thing I could possibly say as a retort (and never actually say it).

3. "Actually It Could Be Unsafe For Me To Confront This Guy"

But you always wind up realizing that confronting a strange and sexually aggressive guy on a quiet street while you're on your own is probably not OK. So silent anger is your only reprieve. (Thanks, patriarchy!)

4. "I'm Totally Going To Film This Guy On My Phone And Post It To The Internet"

Because violence isn't actually an answer to anything, you'll start thinking of other revenge plots. Filming and Internet-shaming, for some reason, always seems like a really good option. You never do it, but you definitely think about it.

5. "Maybe If I Just Calmly Explained To Him How This Made Me Feel..."

There's also a very big speech in you about feminism and humanity and women not being objects. It's well-rehearsed in your own brain, and you think if you could just sit down with every catcaller and tell them your speech very rationally, you might just change the world. You know, if you didn't have a life to live as well.

6. "I Wonder If This Wolverine Keys Trick Actually Works"

Even if you're not feeling particularly threatened in a cat calling situation, at some point your mind will wander to the "Wolverine technique" of holding your keys between your knuckles. Does it even work? The fact that you're even considering it is a testament to just how subtly threatening a catcall is, that you instinctually prepare yourself for not just a verbal attack, but the potential of a physical assault as well. Odds are you'll never have to use it, but that just in case feeling it inspires is one more thing that makes catcalling so undeniably problematic.

7. "It Must Be Nice To Walk Down The Street In Peace"

When you see men walking around, un-harassed, you think how nice it must be to be able to walk around without anyone saying anything to you.

Peace does sound nice. You start thinking about becoming a hermit and moving to a remote location sans streets filled with horrible men. It would be lovely, wouldn't it?

More like this
10 Times Boris Johnson Got It Wrong On Trans Rights
By El Hunt and Sam Ramsden
All The Astrological Events Happening In June
By Nina Kahn
Here's Your Daily Horoscope For May 26, 2022
By Mecca Woods
Here’s Your Horoscope For June 2022
By Alexandria Lettman
Get Even More From Bustle — Sign Up For The Newsletter