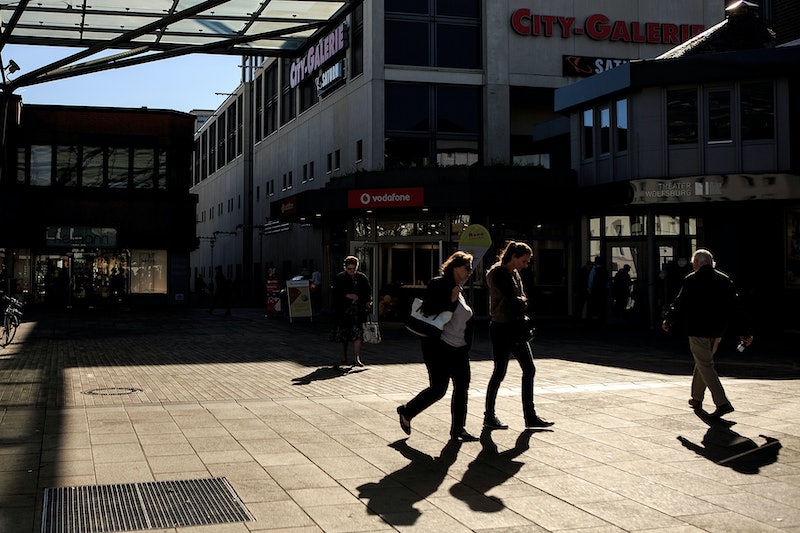 This just in: Catcalling sucks. It's not a compliment, it's not a show of appreciation, and as the new video "Sons React To Their Moms Being Catcalled" shows, it's not just something that happens to young women. If you identify as a lady, chances are you're already intimately familiar with the ubiquity of street harassment, but let's recap just in case. According to Hollaback, a study with more than 16,000 participants found that 85 percent of U.S. respondents reported reported experiencing catcalling or other forms of street harassment before age 17, and a disturbing 77 percent of women under 40 reported being followed by men in the past year.

And yet despite the statistics and overwhelming testimony from women of all ages, ethnicities, sexualities, and backgrounds all over the world, many men (and some women) insist that it's nothing to worry about. Boys will be boys, men will be men, and if women didn't want to get catcalled, then they shouldn't go out in public — especially dressed like that.

That attitude is what prompted The Scene to create videos showing the reality of street harassment. Last month, they showed fathers reacting to their daughters getting catcalled. This time around, they flipped the script by showing sons footage of their mothers enduring street harassment. It's a little gimmicky, but the results are still powerful.

Male participants in these kinds of videos almost always have a hard time taking things seriously at first. Apparently, this is doubly true when the women in question are mothers. "She's pretty, all right? Obviously it's going to happen," one man explains. (Or should I say mansplains?)

Honestly, this behavior is understandable. Men simply don't experience street harassment on the same daily basis as women, so in all likelihood, the reality of being harassed day in, day out, every time you set foot in public just doesn't register until they can see it in action, perpetrated against someone they care about. When you add in the fact that the woman is his mom, who he undoubtedly prefers not to think of as a sexual being, it's not hard to see why a man would try to downplay the subject at first. The problem arises when women explain street harassment and men still don't listen. Ignorance isn't a fault, but willful blindness is.

Luckily, the subjects of the video get the idea pretty quickly.

"He just walked up to you and said that stuff," one teenager says, seemingly baffled. "I don't know what he was trying to get at there." Neither do we, man.

In fact, this kid is astonishingly perceptive — he later goes on to say that if men approached him while he was clearly uncomfortable, the way they did to his mother, he would "feel like an object, probably." I believe we have a budding feminist here, y'all. Someone get me a tissue, because I'm crying tears of happiness.

But I digress. The last participant sums things up nicely. "That's ridiculous. When someone catcalls my mom, I just feel angry and weird," he says. So do I whenever a simple coffee run turns into a study in ignoring the man following me for the last four blocks, claiming that I look just like Katy Perry. (I'm more Zooey Deschanel, obviously.)

More like this
Is TikTok’s “Villain Era” Trend Just An Excuse For Bad Behaviour?
By Chanté Joseph
What The History Of Pride Month Means For Celebrations Today
By Jay Polish
TikTok's Favorite Bartender Thinks Mimosas & Bloody Marys Are Out For Brunch
By Alexis Morillo
How To Decorate Your Home Like A Coastal Grandmother
By Emma Garza
Get Even More From Bustle — Sign Up For The Newsletter