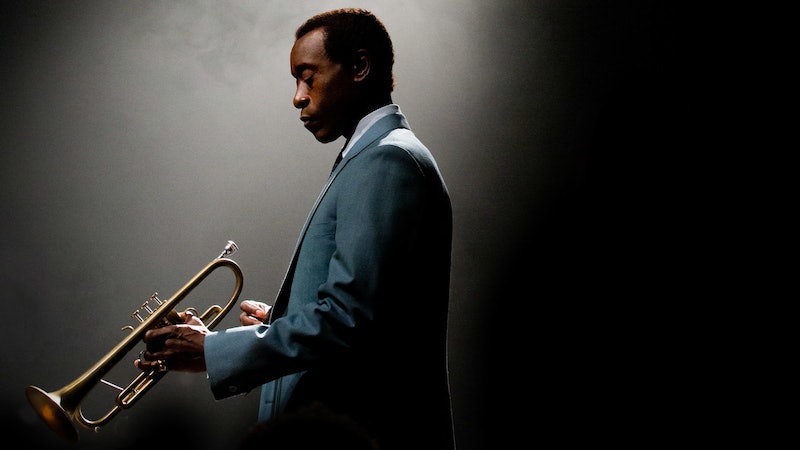 After 10 years in the works, Miles Ahead, the new Miles Davis biopic starring Don Cheadle, is finally hitting theaters on Apr. 1. Considering that it revolves around one of the most prolific musicians of the 21st century, many are wondering how accurate Miles Ahead is in telling Davis' story. It's a relevant question, especially since filmmakers have been open about that fact that Miles Ahead does not follow a traditional biopic formula. Instead of recounting Davis' life in a chronological manner, the movie starts in the 1970s and leaves out many details about events in the musician's career and personal life.

Even though audiences are accustomed to seeing "cradle-to-grave" biopics, Miles Ahead's unconventional structure may be more easily digested since it comes right on the tails of 2015's Steve Jobs, which was divided into three sections that each focused on a different major product launch in the career of the Apple founder. As this new type of biopic is introduced to mainstream audiences, it allows filmmakers to focus on artistry over accuracy, ostensibly resulting in more engaging films. And while some critics may believe that this refusal to follow standard biopic conventions results in a subpar film, Cheadle was adamant that Miles Ahead should tell Davis' story in a way that didn't cater to traditional cinematic norms.

Cheadle co-wrote, directed, and even partially funded Miles Ahead, and so he had a pretty big say in how the film was structured. To this end, he told Vulture last year, "I had no interest in making a biopic." Instead, the actor wanted to make a movie that felt as free-flowing and improvisational as Davis' music, as opposed to documenting all the individual important moments of the artist's life. Said Cheadle, "It’s not to me about hitting signposts along the way, and Miles was never about that. I felt like for this particular artist it would really be a violation to try to do something standard and something kind of cookie-cutter."

The Captain America: Civil War star also expressed his desire to include as much as Davis' music as possible in the film, without being tied down to the time period during which each piece was written. "I see stories in my head when I listen to his music, and I wanted the music to support those stories... I think had we told it in a way that was chronological, was cradle to grave, was standard telling, we would’ve been pigeonholed into these moments that coincided with the music, and they would’ve all been given short shrift," Cheadle told The Hollywood Reporter last year.

In order to make it clear that the narrative is a story and not a documentary, the movie is set up with Davis reflecting on his life during an interview with a reporter in his later life. This perspective implies that the story will not be subjective, but will instead be musings by a man who was known for being an improviser. In this way, Cheadle hoped to make the movie feel like a musical composition that captured the "essence" of Davis as a person and artist, according to Vulture. So although Miles Ahead isn't factual in the manner of a traditional biopic, it seeks to capture the creativity and character of a man whose contributions to jazz are timeless.