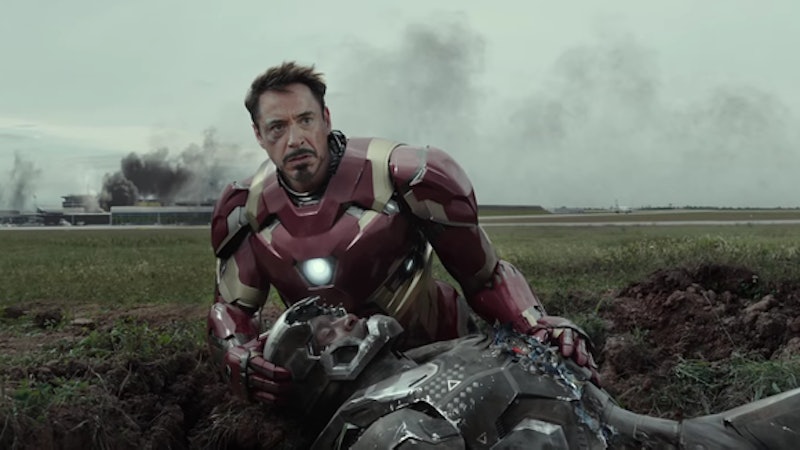 When the first trailer for Captain America: Civil War was released back in November, it was a lot to take in. The first appearance of the Black Panther, Iron Man and Captain America going at it, the Sokovia Accords... like I said, a lot. But perhaps the scene that concerned fans the most was a brief glimpse of Don Cheadle's lifeless War Machine being cradled by Iron Man, leading some fans to believe that Rhodey dies in Captain America: Civil War . Now, with the release of a brand new trailer for the film, the scene in question is expanded upon, and things really don't look good for James "Rhodey" Rhodes.

In the new trailer, War Machine and Iron Man are both flying at high altitude when Rhodey is shot, presumably by the Winter Soldier, right in the arc reactor. This causes him to fall from the sky, resulting in a rough landing. When Iron Man reaches him and removes his mask, War Machine is unconscious with blood dripping from his nose, and Iron Man looks devastated. Just judging by appearances, it looks like War Machine is indeed dead, but would they really give that away in the trailer? Or is the "death" just a clever misdirection.

Whether he dies or not, it's currently understood that whatever happens to War Machine is going to be quite pivotal to the events of the film. This is significant, since he's largely been a peripheral character in the Iron Man movies up to this point, so knowing that he plays a key part in the events of a Captain America movie suggests that something big will happen to him. And since the movie is about the breakdown of the relationship between Iron Man and Captain America, I can't think of any more significant thing for War Machine to do than die in a way that Cap is at least partly responsible for. Reinforcing War Machine's important role in the film is Cheadle himself, who told Superhero Hype the following back in January:

"I never know what it’s going to be and they keep their cards very close to their breast with Marvel. I never know where the character’s going to go, but he’s become more and more and in [Civil War], you’ll see that what happens to Rhodey is a little bit more intense and pivotal to what happens in the rest of the stories."

If Rhodey does die, it would mimic a scene from the comics' "Civil War" storyline where the character of Goliath, who fought for Team Cap, is killed in action by a clone of Thor, who was created by Iron Man. This event serves to escalate the conflict, and the death of War Machine would definitely accomplish that, and to an even higher degree since he's Tony Stark's best friend.

On the other hand, one could argue that killing off Rhodey would be a bridge too far, and because he's Stark's best friend, that event would irreparably damage the friendship between Cap and Stark. Don't forget, these two have to be on the same side again in time for Avengers: Infinity War , so having Cap be responsible for, even if it's indirectly, the death of Iron Man's best friend, might be something from which they could never come back.

Then again, Captain America himself is also rumored to die at the end of the movie, which is what happens at the conclusion of the comics' version of events. If that's the case, then maybe Rhodey's death could be what starts a chain reaction leading to Cap's demise, which would likely be indirectly caused by Iron Man. All of this is just speculation at this point, but it's obvious that War Machine is going to both have a tough time and play an important role in the film. Whether or not that means he's going to die though, is something fans won't know until the movie premieres in May.