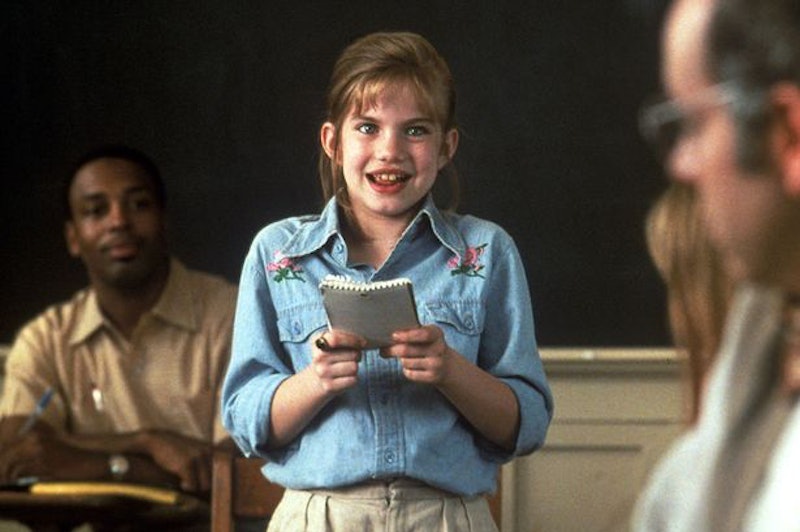 If you grew up in the '90s, you'll probably remember it with an unrivaled nostalgia. It really was a very strange, kind of innocent, very earnest time to be around. Nineties kids will say a lot of things about the '90s, but there are also a lot of things they'd never be caught dead saying, too. And of course, there are also things you should never say to a '90s kid, if you'd like that '90s kid to continue liking you. One of those things is definitely not "as if". We still love saying "as if", even if it does make us look old and uncool. The '90s, like I suppose any decade is, is something of an identifying badge for those who remember it well, and spent their formative years with blue hair mascara and poo-brown lipstick. So there are a lot of things we can be defensive about when it comes to talking about the era that defined us.

Kids of the '90s are easily recognizable by the fact that they always have nice things to say about the '90s. Sometimes they'll seem like they're mocking the '90s, but they're not really. Secretly, they like that they wore weird hipster jeans and glitter eye shadow rather than trendy Kylie Jenner-sanctioned outfits. We '90s kids love how uncool we are, even if we'd never admit it. Here are some things you'll never catch a '90s kid saying:

1. "The Backstreet Boys And NSYNC Are Equally Good."

No. No. No. There isn't a '90s kid alive that is on the fence about Backstreet Boys versus NSYNC. Before there was Team Edward and Team The Wolf Guy, we argued about who was better between the two biggest boy bands. You chose one or the other. Even if you listened to both, you had a clear favorite, and weren't afraid to vocalize it. Even now, a '90s kid will never, ever claim that the two boy bands were equal.

2. "Leonardo DiCaprio Is Much Handsomer As An Adult."

This is the kind of crap people who weren't hormonal in the '90s would say. Everyone knows peak Leo is Romeo + Juliet and Titanic Leo. Adult Leo doesn't hold a flame to baby Leo, and you can distinguish '90s kids from everyone else by their preference in Leo era.

Are you even kidding me with this? KIDS TODAY, huh? Most of us '90s kids were supremely annoyed when Iggy Azalea bit Cher's Clueless style, while the youth of today thought it was so very unique and chic of the Aussie rapper to reference "that olden days movie" in her visual. There is only one Clueless. There is only one Cher, and (unfortunately?) there is only one Stacey Dash. And no modern music video will ever be as good.

4. "You Should Try That New Kylie Jenner Lipstick."

Nothing against Kylie — props on your entrepreneurship, girl — but we '90s kids already lived through brown lipstick. We're not willingly bringing it back.

Cartoon movies look great now, but they're not better. You can't even compare Inside Out to Aladdin, for instance. Sure, it might seem more advanced, but '90s kids grew up in the golden era of cartoons. We lived and breathed The Lion King and Beauty and the Beast. What might look like primitive drawings to you, to us, is the real magic of children's cartoons.

You know what was revolutionary? MSN Messenger! AOL Messenger! ICQ! Online chat, before social media, when '90s kids were just starting to use the Internet, was EVERYTHING. GChat is great, but it was invented by the heyday of online messaging, a time we remember fondly.