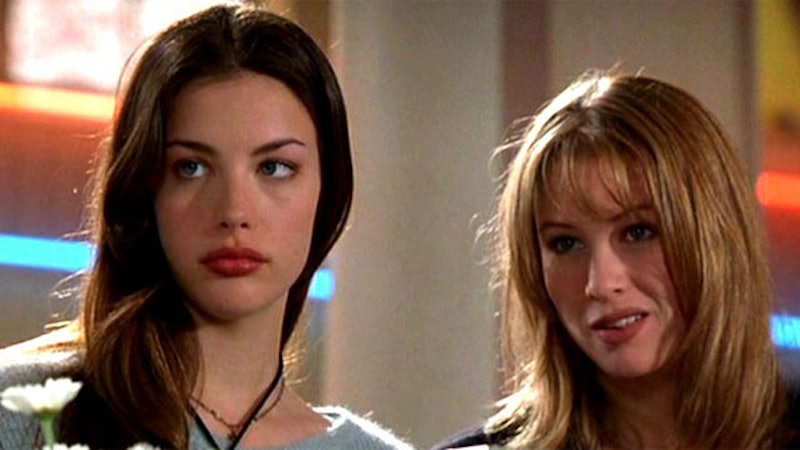 Nineties girls, as oblivious as we were to reality (which bites, by the way), came with our fair share of insecurities. Yes, a lot of those were serious human insecurities, but a lot of them were actually also centered around whether or not Kurt Cobain would turn up to the seance he was summoned to. I mean, I'm not saying that's not a "serious human insecurity," but you know, hindsight is something of a cruel mistress. Girls today have different kinds of frivolous insecurities. Like if Kylie Jenner's lip kits are going to sell out before they can buy one. Or something to do with Snapchat, which is something I'm not sure I fully understand because I am old and my little brothers use it which makes me immediately put up a mental wall against doing that thing. That's young people stuff.

Everyone feels insecure about things that probably seem silly in retrospect, but for those of us who grew up in the '90s, there's a specific pang we still feel when we think back and remember the time we didn't have the right patches sewed on our jeans, or when we once did a wrong dance move to "Stop" when really, we knew the move, we just got lost in the moment. There are some things every girl was insecure about in the '90s.

1. That One Friend Who Was Definitely Pushing The Cup During Seances

You wanted to trust all your friends in the '90s, you really did. But as much as you wanted too, you absolutely couldn't, because one of those denying little rats was pushing the cup during a seance. And you still don't know who it was.

2. Getting Your Crimped Hair To Look Voluminous And Not Flat

In the '90s, my mum used to put my hair in dozens of tiny braids before bed (because for some reason she wouldn't invest in a crimper), and in the morning before school I'd excitedly brush them out into the biggest tease I could. But for '90s girls, there was always a worry that those crimps would look limp, and that by the end of a school day, they'd be hanging flat rather than voluminous like Kelly Kapowski's.

3. That J.T.T. Was Cheating On You With Someone Else

If you were a girl in the '90s, you probably lay awake at night seriously concerned that J.T.T. (or Leo, or Andrew Keegan, or Devon Sawa) had met another girl that wasn't you and that they were genuinely happy. It was always an source of deep insecurity that your heartthrob crush was cheating on you.

4. That You Could Hear A Snippet Of The DJ's Conversation In Your Meticulously Put Together Mix Tape

Countless hours were spent making mix tapes from the radio in the '90s, whether for yourself, a friend, a crush, or your S.O. The amount of anxiety that came with trying to cut out the radio DJ's talking at the start and the end of the song was phenomenal. And the amount of insecurity that came with handing off a tape that had even a millisecond of speech in there was excruciating.

5. That Your Eyebrows Weren't Thin Enough

It's all about big and bushy now, but in the '90s, thin eyebrows were chic. My mum wouldn't let me pluck mine because I was "too young" so I walked around with intense eyebrow anxiety, as did many girls blessed with caterpillars sleeping over their eyes. These days, not plucking is a lot more the norm, but the '90s bought insecurity when it came to being under-plucked.

In the '90s, you were collecting something, and whether it was Beanie Babies, some kind of collectible card from the news-agency, Slap Bands, Tazos, or any other buzz collectible, you were probably saddled with a lot of insecurity about not having a complete enough collection. I know I was always very worried when my friends had holographic Tazos are I had none.

7. Being Stuck With The Wrong Colored Bands On Your Braces

When you went to get your braces tightened in the '90s, you also got fluro pink bands to go around them. Or green. Or blue. It changed depending on arbitrary decisions in braces taste handed down by teenage girls. The most insecure you could ever be was getting pink, and then one week later, the favored color becoming something else, and then having to wait another six weeks until your next visit to the orthodontist. Kind of like today's problem of buying a new phone, only for another model to come out a week later.

8. The Crunchiness Of Your Hair Mascara

There was no getting around crunchy hair mascara, but you super wanted temporary colored hair, so you'd walk around half proud that you'd made your bangs blue, and half riddled with insecurity about how stiff the hair mascara made your hair.

More like this
American Girl Doll Memes Are Going Viral On Instagram & Tiktok
By Emma Carey
The Secret To Taylor Swift’s Fringe, According To The Experts
By Orla Pentelow
Glossier’s New Olivia Rodrigo Campaign Is Giving ‘90s Groovy Chick
By Tomi Otekunrin
Kiehl’s Just Launched Eco-Friendly Cleansing Bars
By Jessica Morgan
Get Even More From Bustle — Sign Up For The Newsletter