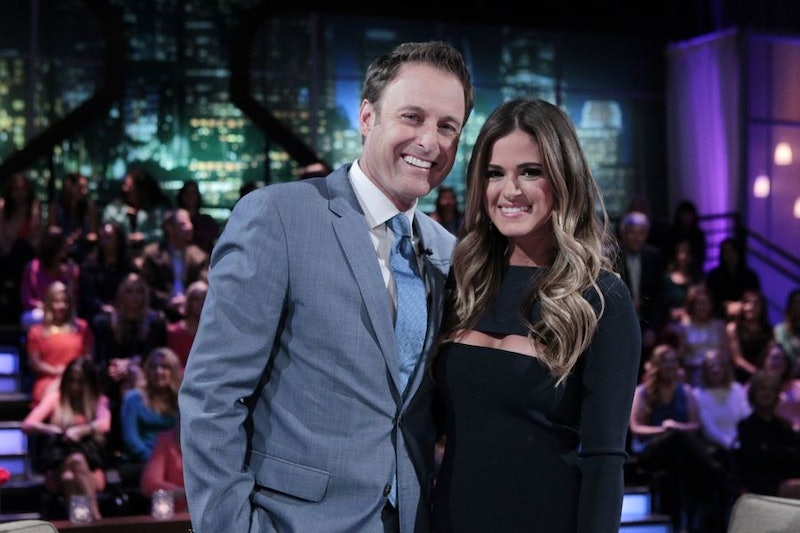 When Ben Higgins said goodbye to Joelle “JoJo” Fletcher on The Bachelor season 20 finale episode, fans basically didn’t have any time to grieve JoJo’s loss before it was announced that she would be the next Bachelorette. I guess it turns out that JoJo didn’t need Ben, after all. Fans who were team JoJo all along are anxiously awaiting her Bachelorette debut, though tweets from Bachelor/ette creator Mike Fleiss are easing the pain of waiting for the anticipated upcoming season. He has been tweeting up a storm about JoJo's season with hints, photos, and spoilers. So, to ease the wait time until May 23, here is every Bachelorette spoiler about JoJo's season from Mike Fleiss to date. As of Tuesday, April 12, he's said 42 things about the upcoming season, which is both impressive and a little annoying for people who want to keep the mystery alive. (Speaking of which, this is your official spoiler warning.)

On March 16, filming The Bachelorette became fodder for Mike Fleiss’s Twitter account. He’s been dropping spoilers left and right about kisses, possible fights, and enviable travel destinations that leave a lot to the imagination. If you haven’t been following @fleissmeister, here are all of the major spoilers you have missed from his Twitter account — and one is a real doozy.

It would be The Bachelorette without drama with the men!

2. Could There Be Another Unicorn?!

The second JoJo stepped out of the car with a Unicorn mask I knew I loved her... So, could there be another special, masked contestant?

Can't wait to find out who with!

4. There For The Right Reasons

She'll be a great Bachelorette.

Who is the lucky guy?

6. Apparently A Lot Of The Guys Have Something In Common ...

She just had one yesterday? Jeez, they don't waste any time filming The Bachelorette. At least she seemed to like the guy.

9. Where In The World Is This Date Happening?

My guess is that it involved fireworks.

It's already at three, people!

Unless this really is code for something, it's not nearly as interesting as the kiss counter.

Not like that! We see what you did there, Fleiss.

Our first visual of the season.

JoJo was prepping too!

18. We Have A Rose Ceremony Picture Of JoJo!

This is not a drill, people.

19. Apparently Things Are Heating Up Over There

21. We Have Another JoJo Picture!

Ok, what's the deal with this half number?

I'm glad things seem to be going well for her!

I wonder where JoJo is going?

What does that mean? Rose ceremony? Date card? Harrison planning a date? (Fingers crossed it's the latter.)

It's not The Bachelorette without some shirtless shots!

29. JoJo Could Have Found The One

Also, where are they going?

Love knowing what my girl is eating! And, Peeps are delicious.

I seriously hope this means we get to see puppies.

Hot tubs are a Bachelor staple, after all. As is Jimmy Kimmel

Wonder who that someone is...

A "Terrible Towel" is a symbol of the Pittsburgh Steelers. So, this means one of three things. A. They went to Pittsburgh as a date destination, which is a sort of random choice. (Hey, I should know, I lived in Pittsburgh). B. One of the guys is a Steelers football player. (It could happen, right?) C. HOMETOWN HINT! We know JoJo is a Texan, so could the guy whose hometown she goes to be a Pittsburgh native? This could be a big spoiler.

JoJo even met some Steelers!

41. Some Real Feelings Come Out

Hopefully, nothing as heartbreaking as what went on behind the bathroom door on Ben's season.

43. Apparently There Are Two Stand Out Contestants

JoJo looking flawless, even on the run!

Wonder where they'll be traveling this year?

Abroad with a hot guy? That's the dream.

What hike would be complete without a statement necklace?

48. Celebrating With Some Skin

Fleiss celebrated 60,000 followers by showing some skin... Can't wait to learn more about this guy.

49. Another Hint About A Date

Could it be scuba diving? Snorkeling? Swimming?

50. A Behind The Scenes Look At The Crew

The crew has to eat too!

52. JoJo In Another Gorgeous Gown

Can't wait to see if she gets a ring on her left hand, too.

53. Yet Another JoJo Pic

Apparently, it's a date night!

JoJo is at the beach.

Her outfits have seriously been on point.

58. Some Guys Are Showing Their True Colors

JoJo shares a selfie in a red dress, but what's the occasion?

His clues have left fans like me with more questions — and made me more excited — than ever. Can't wait for May 23.

More like this
JoJo Fletcher & Jordan Rodgers Got Married In A “Playful & Fun” Wedding
By Grace Wehniainen
Will ‘Bling Empire’ Return For Season 3? Here’s What To Know So Far
By Kadin Burnett
Everything We Know About 'Umbrella Academy' Season 3
By Gretchen Smail
Netflix Just Revealed When 'Never Have I Ever' Seasons 3 Will Premiere
By Gretchen Smail and Alyssa Lapid
Get Even More From Bustle — Sign Up For The Newsletter