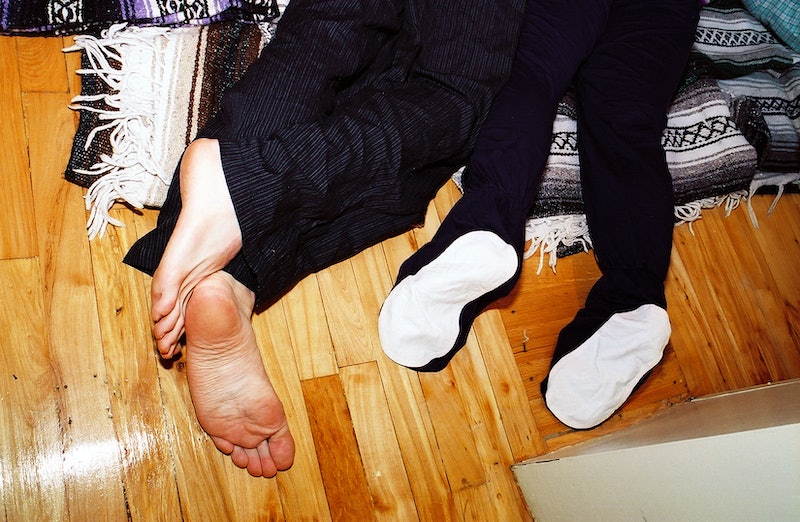 On March 28, I went to a cuddle party and didn't cuddle with anyone. And it was awesome. OK ... let me back up. A cuddle party is basically what it sounds like. A bunch of people gather in a room (in this case, a yoga studio) and spend several hours talking and cuddling. But there's another aspect that the name doesn't reveal: It's preceded by a thorough talk on boundaries and consent.

Host Reid Mihalko, a sex educator, told me he started the parties in New York for massage therapists who wanted to receive massages themselves. His non-masseuse friends wanted to come, but were too intimidated, so he joked that they should just have a "cuddle party" instead. The rest is history. The cuddle party grew into a phenomenon, spreading to the West Coast as Mihalko relocated to the Bay Area and now existing in 17 countries. On this particular occasion, Mihalko had returned to New York to run a workshop/party along with co-facilitator Monique Darling.

When Darling greeted me at the yoga studio, she asked if I would be open to a hug or a handshake. I completely froze. I would've gone along with either if she initiated it without asking, but I'd never had to think about whether I actually wanted either of those things — or any form of physical contact, for that matter. My mind couldn't process the concept of choosing whether or how someone else touched me. Probably noticing this, Darling moved on and helped me get settled. The photos below from past cuddle parties (not this one) should give you an idea of what the setting looked like.

The participants sat around in a circle, most wearing pajamas (which I'd forgotten to change into — oops) and sitting on cushions. A few volunteered to share what they hoped to get out of the workshop, citing reasons ranging from meeting new people to learning to relax to practicing saying "no."

The party was combined with a shortened version of Mihalko's famous speed flirting class, in which he explained what flirting is and how to be good at it. Flirting really just means being playful, he said, and it's not always romantic. The secret to flirting successfully, he explained, is being upfront about everything, including how awkward the situation is. Nowadays, when there's no script for how an interaction should go, he says it's better to just say, "I think I'd like to have sex with you. Can I buy you a drink so we can figure out if that would be a good idea?" than the standard "Can I buy you a drink?" Mihalko will even come up to people and say, "I think I'm attracted to you, but I can't tell because I don't know you. Would you be interested in getting to know each other?"

We then did a silly exercise which involved walking around the room and hugging, making exaggerated flirtatious gestures at, or averting our eyes from the first people to meet our eyes. This is when I started to feel uneasy. Like many women, I've had people get "the wrong idea" when I've spoken to them, smiled at them, or agreed to hang out with them, and I've been accused of leading people on for not wanting to hook up with them or date them after acting friendly. I was scared that my participation in this exercise and the event in general could lead someone on or cause them to do something I wasn't comfortable with.

This fear was put to rest a bit when Mihalko and Darling explained the rules of the party. Some of my favorites were that you don't ever have to do anything (not even cuddle!), you have to get explicit permission before doing anything with anyone else (and you have to be specific about what you're suggesting; "Can I touch you?" won't do), and if you're thinking "maybe," say "no" because you don't want to do something you're not totally into, and you can always change your mind.

The last rule particularly resonated with me. In both physical and non-physical contexts, I've often thought "maybe" and said "yes" because I didn't want to miss out. "Want to come back to my place?" "I don't know, but I'll say 'yes' because it would be awkward to say 'no' now and call you later." "Do you want a drink?" "Not sure, but the offer might not still stand if I say 'no,' so OK." And in the past, when I've said "no" to physical interactions and then changed my mind, people have taken that to mean that my "no" is meaningless and that they don't have to listen to it in the future. But here, Mihalko explained, it was always acceptable to say "no" and then change your mind, and everyone always had to ask before touching anyone.

During the time designated for cuddling, I was still a bit nervous, so I sat and observed. Three people approached me. The first asked to sit near me, which made me a bit uneasy (because, again, that fear of "leading someone on" was in my head), but I reminded myself this wasn't like other scenarios — there were rules in place to prevent him from taking my permission to sit with him as consent for anything else.

Still, I was scared I wouldn't have it in me to "reject" him if he asked for more. But I surprised myself. When he asked if he could put his arm around me and then if he could hold my hand, I said "no" both times. I felt guilty about it, but I felt less bad when he told me what the facilitators had instructed us to say after a "rejection," which Darling prefers to call a "redirection": "Thank you for taking care of yourself." Mihalko also pointed out that we're doing people a favor by telling them "no," since nobody wants to do anything with someone who's not enthusiastic.

After that, I was on a "no" high. I said it again to someone else who asked to cuddle, and we ended up sitting several feet apart and having a nice conversation. I realized that my boundaries might be stronger than the other attendees', and that was OK. There was a good reason I was scared of someone misinterpreting "yes" as a romantic or sexual invitation; that's what my experience has been. And if I said "yes" because I felt bad or thought I should, I'd be the one responsible for violating my boundaries.

Feeling safer than when I first arrived, I lay down about a foot away from two people who were cuddling and started chatting with one of them. That's when another person approached me and asked if he could hold my hand. He was older, so for the first time, I felt fairly confident that the request was not meant romantically. In an ideal world, I'd have the confidence to ask, "Do you mean that romantically or platonically?" to make a more informed decision, but I didn't at the time, so I took the risk.

We ended up having a lovely conversation about what it's like to go to Burning Man and how to legally rent out your apartment while you're on vacation. The interaction was comforting, like talking to my parents as a child while I lay in bed. Then, when someone interrupted this conversation by tapping my leg, I flinched and reminded him that you're supposed to ask before touching anyone.

My own firmness surprised me. Normally, I wouldn't blink an eye at such an interaction. I'm used to being touched without consent. In fact, people have rarely asked my permission to touch me, even in intimate contexts. I realized I've gotten used to consenting retroactively, noticing someone's arm around me or someone's lips on mine or someone's hand in my pants and then deciding if I minded or not.

The problem with this "Do I mind?" model of consent is that by the time you can express your dissent, you're already doing something you don't want to do. But at cuddle parties, the question is not "Do I mind this?" but "Do I want this?" And that's a much healthier way to go about things. I got so immersed in this new mindset that it was actually jarring to be yanked out of it.

I also realized that, while others haven't always been the best at respecting my boundaries in the past, I haven't really been respecting my own either. I've been so scared of antagonizing people that I've ignored my obligation to protect myself. If someone ignores my "no," that's on them. But if I mean "no" and say "yes," that's on me.

So, when the person who had touched me without asking apologized and asked me for a "fist bump" to make up, I said "no" to that too. I felt bad for letting him down, but if I'd done anything I didn't truly want to do, I'd be letting myself down. After all, I deserve to do what I want, not just what I don't mind.