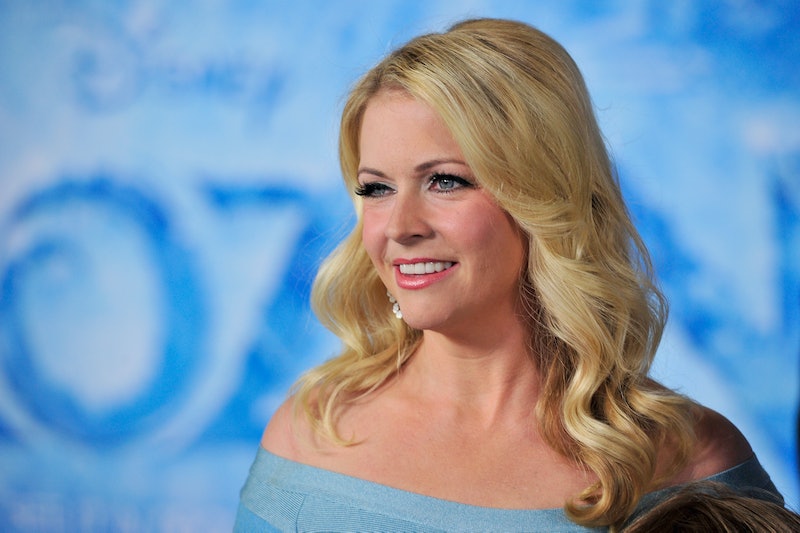 If you're a child of the '90s, Melissa Joan Hart is probably special to you: the beloved actor starred in both Sabrina The Teenage Witch and Clarissa Explains It All!, two of the most classic shows of the decade. And now, it's possible that either — or both — Sabrina and Clarissa are getting reboots, according to an interview by Hart. The star dropped a not-so-subtle hint during an appearance on FABLife on Tuesday, saying that she was going to a meeting right after the interview to discuss a possible reboot — and they were "throwing out Clarissa and Sabrina ideas." Break out all of your tattoo chokers now, because this is huge.

There have been whispers about a Sabrina remake from the former star of the show for a while now; Hart told PopSugar on Feb 24 that she was totally open to a new season of the witchy sitcom, even though she believes that "the seventh season couldn't have wrapped up nicer." But if you're into the idea of a reboot about Sabrina, her two magical aunts and her hilarious misanthropic cat Salem, don't get too excited just yet. Just two weeks ago, Hart posted an Instagram of a fan mockup of a poster for a new season of Sabrina, and she crushed the hopes and dreams of lovers of the ABC show from the amazing TGIF lineup with her caption.

But if you are a bigger fan of Clarissa and its star's life lessons (and incredible collection of neon tights) like I am, then you're in luck, because judging by the Instagram, that's the show potentially getting a reboot. Hart has hinted at that before, too, telling E! last April that anything was possible. Said the star, "Never say never, but I'm not going to try to push it, really. People have already approached me about doing a few reboots, whether it's Clarissa or Sabrina."

There's no telling if that means that, if a reboot were to happen, Clarissa would be reinvented as a millennial, or if it would be a remake of the Nickelodeon show that gave every kid fashion goals from 1991 to 1993. If you don't remember how wacky, weird and wonderful the show about Clarissa Darling and her teen tribulations was, no worries: you can stream Clarissa Explains It All on Hulu.

Unfortunately, whether it's Sabrina Spellman or Clarissa Darling that possibly comes back to the small screen, it wouldn't be for a while. After dropping the exciting info on FABLife, Hart went on to say that it would be a long, long road ahead if a reboot were to happen. Said the actor, "It depends on who’s gonna give up rights, who’s gonna do it, how’s it going to be done. It’s a lot of politics and we are nowhere near doing anything."

Networks, do you not see what an opportunity this is?! Maybe Netflix will pick up one show or the other — after all, they did go deep into the '90s nostalgia with Fuller House, so anything's possible. I personally vote for a Clarissa reboot featuring Salem the cat as her new sarcastic sidekick, but I would be grateful for either show to make a return.