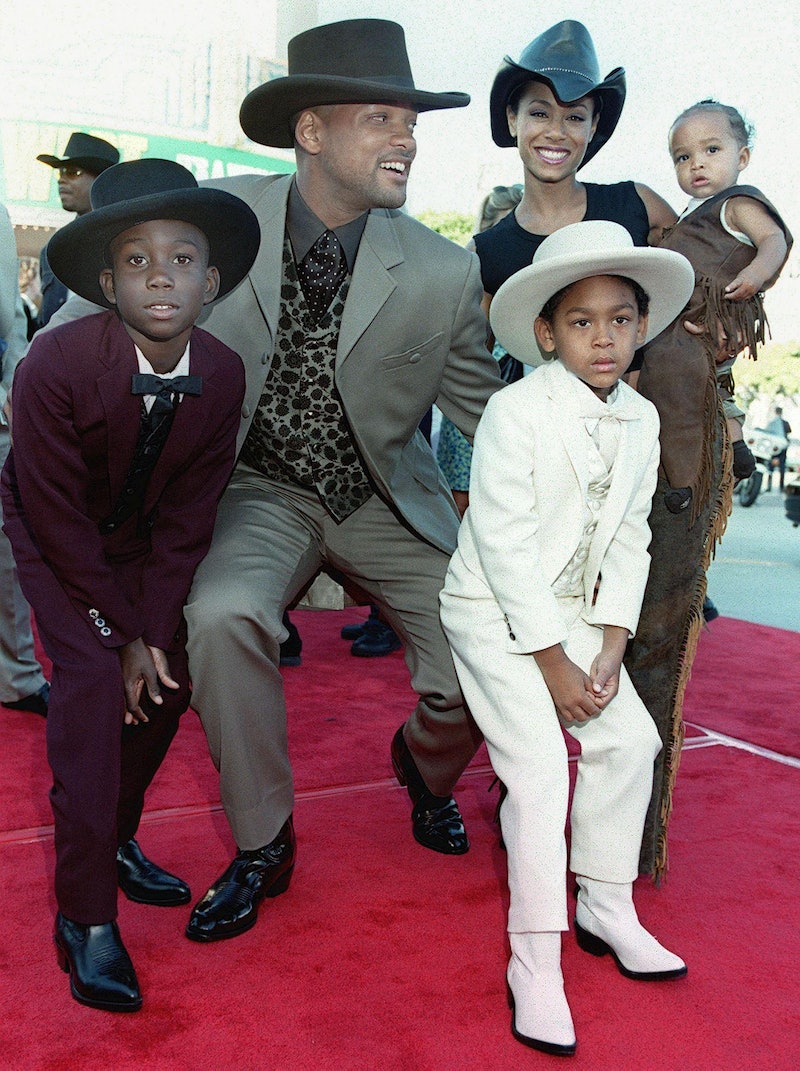 While '90s nostalgia is in full force thanks to Fuller House and "MMMBop" being released 20 years ago, that doesn't mean you can always be proud of certain things from the 1990s. Unlike a fine wine, a lot of music from the 1990s did not age well, but that doesn't mean there still aren't songs from the '90s that you love that maybe you wish you didn't. Some musical hits from that era became almost instantly obnoxious like "Who Let The Dogs Out?" by Baha Men, "Blue" by Eiffel 65, and "Cotton Eye Joe" by Rednex, yet others have stood the test of time ... well, at least in your heart.

Just like your middle school yearbook photos, many songs from the '90s make you so embarrassed that you want to like totally curl up into a ball and die. Yet, the combination of wistful memories plus catchy hooks makes it nearly impossible not to unabashedly love these hits from the 1990s. Maybe if you weren't born when these songs first hit the airwaves you'd be immune to their charms, but even when you don't want to, you can't help but sing along. So I implore you not to be ashamed of these 13 songs that you still love from the '90s. They may not be timeless, but that doesn't mean you still can't have a good time listening to them.

Pitch Perfect introduced a whole new generation to Ace of Base's classic "The Sign," but there was a time when you had to be ashamed for still liking this song.

Before the "Cha-Cha Slide," middle schoolers spent their Friday nights at the school dance following these instructions provided by the 69 Boyz. Parents everywhere were proud.

You may have forgotten that this song existed, but it's honestly just as catchy as it was when you first heard it back in the late '90s.

The Super Bowl may have commemorated Seal's song for Super Bowl 50, but that doesn't mean it's still not one of the most mocked songs from the '90s. Yet I find it impossible not to love — won't you tell me is that healthy, baby?

5. "It's All Coming Back To Me Now" By Celine Dion

While I overplayed "My Heart Will Go On" too much after Titanic to ever truly enjoy it again, there is almost nothing better than belting this epic song with fellow Celine lovers.

I actually find no reason for any person to be embarrassed by his or her love of this song — I've been proudly playing it on bar jukeboxes any chance I get for years: "The trumpet!"

Not even commercials of a guy in a creepy old man mask can make me hate this song. True story: In the '90s, I was told by a girl that she thought of me every time she heard this song — that was the greatest compliment I have received to this day.

Let's be real: Loving any song by Savage Garden is embarrassing, but any song that contains lyrics about "chic-a-cherry cola" is on another level of the cringe-worthy spectrum. But, damn, this song is catchy.

This song still makes me want to throw a dance party — just add a dash of La Bouche and you'll be set.

While songs like "Wannabe" by the Spice Girls have been so universally enjoyed that there is no reason to feel ashamed to still love it, their sexy bedroom song is a different story.

I was certain that I wouldn't be able to like this song two decades after the fact, but if you haven't listened to it in awhile, you may find yourself like I was — delightfully surprised with its unrelenting train references.

Is it wrong to say that I think I might even like this song better now than I did back in the '90s? I blame it on the fact that my fiancé really wants us to perform drunken karaoke to it.

The fact that Will Smith's team does not even want to acknowledge the existence of this song since they didn't include it on his YouTube Vevo page proves that this is the ultimate embarrassing song from the '90s.

More like this
5 Mini Skirt Outfits To Wear, Inspired By These Brave Souls
By Avery Matera
Hayden Panettiere Will Return For 'Scream 6': "We F*cking Won, Scream Fam"
By Jack Irvin and Jake Viswanath
Kim Cattrall Spilled All The Tea About Not Being In The 'Sex And The City' Reboot
By Radhika Menon
10 Eurovision Moments That Celebrate The Weird & Wonderful Camp Extravaganza
By Sam Ramsden
Get Even More From Bustle — Sign Up For The Newsletter