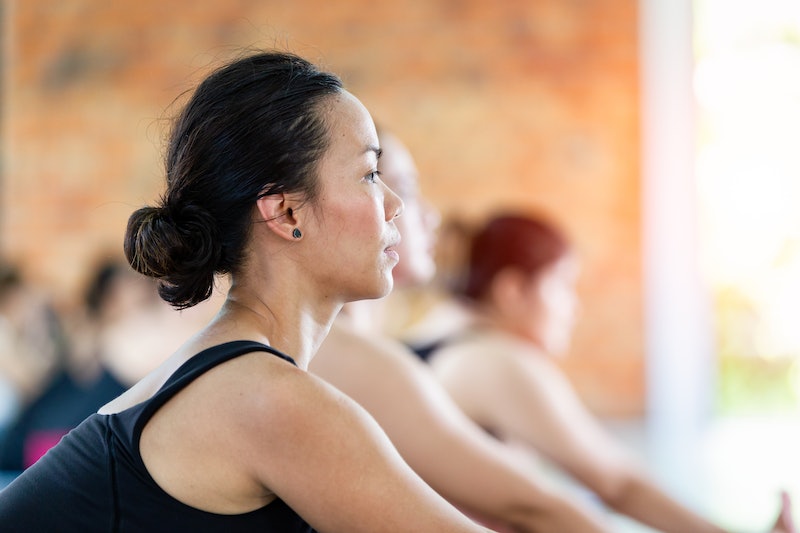 Body odor is one of those things most of us take great pains to prevent. That's why we're constantly stayin' fresh with gum, perfumes, and deodorant. (I have all three in my bag right now.) But despite our best efforts, smelly odors often prevail. And sometimes that body odor can be sign of a health problem.

Now, before you freak out, I'm talking about some pretty bad smells — not your normal, run of the mill, everyday scents. For example, everyone stinks after a trip to the gym. According to Charlotte Hilton Andersen on Shape, that's because sweat gets digested by bacteria that live on our skin, particularly in our pits. When the bacteria break down the sweat molecules, they release an odor that can be described as sulfurous, or onion-y. Take a shower, slap on some deodorant, and you'll be fine.

What are more worrying are the pervasive, horrendous stenches that don't seem so normal. Or the kinds of odors that crop up one day and make you take pause. If showering and better hygiene aren't doing the trick, then these smells might be cause for concern, or at least a better treatment plan. Here are some body odor problem areas, and what they all might mean for your health.

1. Your Scalp Smells Kind Of... Funky

Everyone's hair gets a little musty from time to time, but some people have a next-level smell that can send people running for the hills. This has been named "Smelly Hair Syndrome," and the scent goes way past anything "normal." In fact, some people describe their hair as smelling like a dirty diaper, mildew, a wet dog, an old shoe, or even Doritos Bold BBQ chips, according to Perry Romanowski on HuffingtonPost.com. Definitely descriptive.

Unfortunately, doctor's aren't entirely sure what causes Smelly Hair Syndrome, but there are a few guesses. As Claire Colemon noted on the Daily Mail, it could be due to super oily hair picking up smells from the environment, such as smoke, cooking odors, and other strong smells. The more oily your hair, the more likely the smells are to be picked up. It could also be connected to sweat glands, which cover your scalp just like oil glands. If you have oily hair and you're prone to sweating, then that might be the perfect recipe for a smelly scalp.

So what's a smelly-haired gal to do? As Romanowski suggested, "Dial antibacterial liquid body wash and sulfur-containing soaps. These treatments make sense from a scientific point of view, if the cause is bacterial or fungal. An antibacterial agent (like the Triclosan used in the Dial bodywash) could prevent bacteria from growing, while sulfur could reduce scalp oiliness thereby eliminating the 'food' that bacteria or fungi need to grow." Sounds worth a try, since anything's better than diaper hair.

2. Your Breath Is Kickin'

There seem to be a million and one cause for bad breath — everything from poor dental hygiene, to gum disease, to that burrito you had for lunch. But if you brush regularly, and have been checked by your dentist, then there might be something else lurking in your body that's causing the problem.

According to the Mayo Clinic, "Diseases, such as some cancers, and conditions such as metabolic disorders, can cause a distinctive breath odor as a result of chemicals they produce. Chronic reflux of stomach acids (gastroesophageal reflux disease, or GERD) can be associated with bad breath." These all produce different kinds of bad smells, which can point to a specific issue.

There's also something called "ketone breath," which is worth considering. It's caused by a low-carb diet, and can make breath smell a bit like nail polish remover. According to Denise Mann on WebMD, "Bad breath in the low/no-carb sect is often caused by certain chemicals that are released in the breath as the body burns fat. They are called ketones, and entering into a fat-burning state of ketosis is the hallmark of the Atkins diet." It may smell a bit off, but at least it's a sign your diet is working.

3. Your Sweat Is Ripe

Everyone sweats. Unless you skipped out on deodorant, no one is likely to notice. But sometimes life gets a little hairy, and you experience more stress than usual. When that happens, you may start to produce something called stress sweat. And this isn't as easy to cover up.

According to the Mayo Clinic, we all have eccrine glands that cover most of our body and open directly onto the surface of the skin. We also have something called apocrine glands, which develop in areas like the armpits and groin. They empty into the hair follicle just before it opens on the skin surface. Stress sweat comes out of the apocrine gland, and smells way different.

Unlike our everyday eccrine glands, apocrine glands release sweat in response to several factors, including hormone, anxiety, or emotional stress. When the bacteria on the skin start to break down this type of sweat, it can cause an unpleasant odor, according to the Mayo Clinic. (That's why you smell extra horrible after a nerve-racking date, or right before an interview.)

If this is happening all the time, and you find yourself mopping up smelly smells on the regular, then consider reevaluating how you handle stress.

There are a multitude of things that can affect the smell of your nether regions — your period, infections, poor hygiene. The list goes on and on. And while a lot of smells are totally normal, there are definitely some that are worth checking out.

These are the more, well, shocking smells that are usually accompanied by discharge. According to Samantha Lefave on RedBookMag.com, "Having discharge alone is normal, yes. But having it come out clumpy or smelling like a trip to the raw fish market is not good, and it could mean a yeast infection, sexually transmitted infection (STI), or even chlamydia. As soon as you notice these symptoms, get to your gyno. Depending on your diagnosis, you'll definitely need a course of treatment." The sooner you get yourself checked out, the better.

5. Your Pee Is Super Stinky

No one ever said pee smelled good, but it really shouldn't smell bad, either. As Lefave noted, "Normally urine is scent-less, or if it has a scent, it's usually a very subtle, ammonia-like smell ... So if you get a big whiff without even trying — and it's accompanied by pain, typically a burning sensation, when you pee — schedule a gyno visit. You could have a urinary tract infection (UTI) and will likely need to cycle through some antibiotics."

While a UTI is more worrying, it's not the only cause for stinky pee. It could be caused by something as benign as what you ate last night. According to Lefave, urine smell is extremely variable, and can change with your diet. This is especially the case if you eat asparagus, which causes a pungent smell. Urine can also be a bit stronger when you're dehydrated. If that's the case, there's nothing to worry about. Just drink more water, and move on with your life.

Stinky feet, medically known as "bromodosis," can affect anyone. That's because our feet are covered in sweats glands, and by know we all know what those mean — smelly smells.

And feet sure are prone to sweating. According to WebMD.com, "There are more sweat glands in our feet than anywhere else in the body. However, unlike sweat glands elsewhere in the body, the sweat glands in the feet secrete all the time, not just in response to heat or exercise." Cue bacteria going to town on sweat, thus creating a less-than-pleasant, almost cheesy odor. This can happen more often to people who wear the same shoes everyday, as well as to women going through stress or hormonal changes.

It can also be a sign of Athlete's foot, which is caused by a fungus growing on the top layer of your skin. (Lovely!) If that's the case, you'll want to take good care of your feet, and get an over-the-counter anti fungal cream, suggested WebMD.

Smelly body odors are embarrassing, but they happen to everyone. However, they can be a sign of an underlying health problem. So if you've been feeling less than fresh, get yourself checked out by a doctor ASAP.