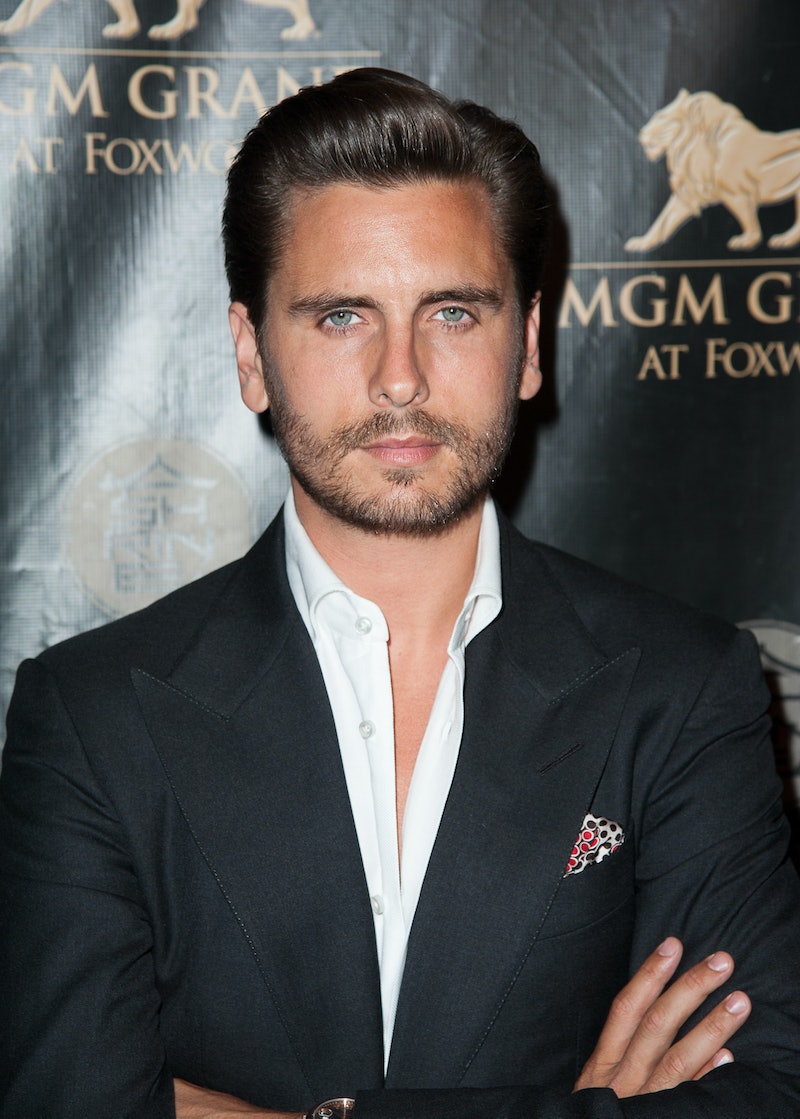 The Kardashian family is somehow never short on drama and surprises, which is why they are at the top of the celebrity food chain. I know I have, along with millions of others, gotten pulled into the saga of Scott Disick and Kourtney Kardashian, who split last year after nine years of dating and three children. As fans, we know that Disick has had his issues, but it seems like he is finally taking the right steps to maintain a positive relationship with Kardashian for the benefit of their family. Their status of "together or not?" has been driving fans wild, and Disick added fuel to the fire by saying in an interview that he wouldn't rule out getting back together with his ex in the future.

Disick opened up to Australian radio show Kyle & Jackie O and shared some insight into his current relationship with Kardashian and how he views dating anyone at the moment. Disick told the hosts,

She's like my best friend... I'll love her 'til the day I die. I don't think anything is ever simple. But, you know, I'm not the first person in the world that's gotten separated from a significant other — we're just trying to make the best of it, and life goes on.

Well, that's certainly very sweet and surprisingly mature, especially coming from Scott Disick. Although Disick and Kardashian recently teased fans about the idea of reconciliation via Snapchat, Disick really sounds to have a promising outlook on the whole situation of them actually getting back together — just not right now. He said,

You know, I never thought a lot of things would happen in my life the way they did, so I don't really rule anything out... I have no plans in my mind of what's going to happen. So, you know, if things are meant to be maybe they will be. I really can't say yes or no. There are things we both have to work on... We’re at a good place, [but] I don’t think either of us want anymore than where we’re at.

This is significant because Disick and Kardashian really sound like they are focusing on their family and what's working for them and not on the potential problems of that could come with reviving a previously toxic relationship.

Disick also commented on his dating life. And while he didn't mention any names specifically, there have been rumors recently that he is dating a Kendall Jenner look-alike, model Lina Sandberg. He said,

No, no — I mean, it's just unfortunate that you can't have friends this day and age... I don't know. I'm not really thinking about dating at this point in my life.

Disick continued to stay positive about his current status in his life, aside from his love life, saying,

Good on you, Scott. Above all, Disick seems to finally be taking his wellbeing seriously and avoiding any unnecessary issues that may impede his growth. If he and Kardashian are meant to be, they will be.

More like this
These Adorable Kourtney & Travis Moments Led Them To The Altar In Italy
By Bustle Editors
Scott Disick’s First Time Around Kravis Was “Awkward,” To Say The Least
By Jake Viswanath
Kourtney Kardashian Broke Her Engagement Ring & Cried In Her Closet For Hours
By Jake Viswanath
Natalia Dyer & Charlie Heaton's Relationship Is Still Going Strong
By Allyson Koerner and Sophie McEvoy
Get Even More From Bustle — Sign Up For The Newsletter