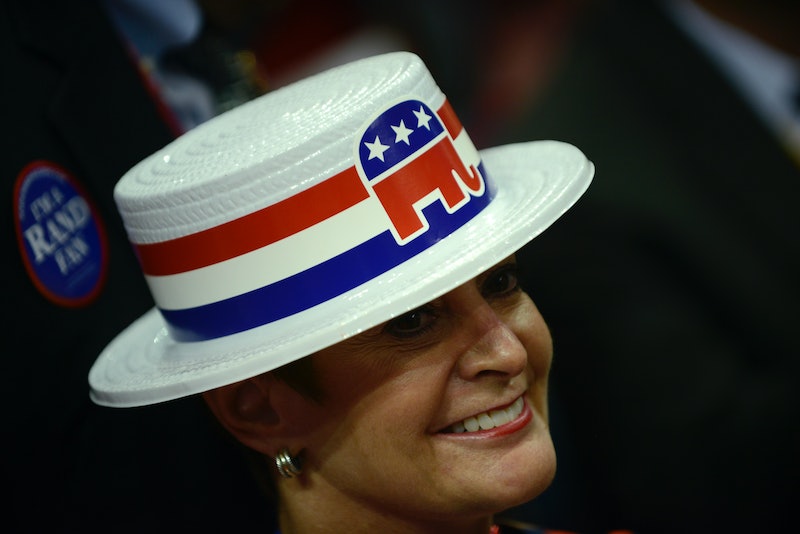 Republican elected officials have adopted much more extreme stances on reproductive rights and abortion in recent years, as exemplified by many of this year's GOP presidential candidates not even supporting abortion exemptions for cases of rape and incest. However, the history of abortion rights in red states is pretty surprising. The party wasn't always so opposed to letting women choose whether or not to terminate their pregnancies. Believe it or not, some of the first states to legalize abortion before Roe v. Wade were controlled by Republican politicians.

In the early 1960s, abortion was a crime in every state. As pro-choice activists framed the debate around the women risking their lives to have the procedure, individual states began liberalizing their laws. In 1967, Colorado was the first to do so, allowing women to obtain abortions in cases of rape and incest. Shockingly, the swing state was led by Republican Gov. John Love at the time, and the conservative politician signed the controversial bill into law, kicking off the wave of abortions rights that swept over the country until the Supreme Court conclusively legalized the practice. "When you could hardly say the word 'abortion' in polite company, how could it pass the legislature?" Dick Lamm, the Democratic legislator who sponsored the Colorado bill, told The Denver Post's Claire Martin in 2007. "We caught everybody so by surprise."

Just a few months later, California Gov. Ronald Reagan (yes, that Ronald Reagan) signed a similar bill, which was intended to decrease the number of "back-door abortions" in the state. Reagan later said that he wouldn't have signed it had he been more experienced and aware of the consequences, and was strictly pro-life while president.

In 1970, New York became the first state to legalize abortion up to the 24th week of pregnancy. Hawaii had previously legalized abortion up to 20 weeks under a Democratic Catholic governor, who neither signed nor vetoed the bill, but the new freedom was only extended to residents of the islands. New York's law was the most progressive of the time because of the extended timeframe and the lack of residency requirements, which allowed women from other states to travel to New York for the procedure. Not only did New York Republican Gov. Nelson Rockefeller sign the bill into law, but it was also passed by both Republican-led houses of the state legislature.

Colorado and New York signify how Republican politicians weren't always so vehemently opposed to reproductive rights. Because Reagan later regretted his decision, his case doesn't really demonstrate that the party used to be more in favor of women's right to choose, but it still highlights that the party has moved further to the right. It's safe to say Ted Cruz would never sign a bill expanding access to abortion. Letting women make their own choices about their bodies actually fits with the Republican values of small government and privacy pretty well, and GOP leaders in the 1960s and 1970s recognized the benefits of accessible abortion.

More like this
How To Fight For Reproductive Rights, Based On How Much Time You Have
By Courtney Young
Harry Styles Called For "Backlash" In Powerful Statement On Abortion Rights
By El Hunt
10 Times Boris Johnson Got It Wrong On Trans Rights
By El Hunt and Sam Ramsden
Manchester Arena Attack 5 Year Anniversary
By Ella Glover
Get Even More From Bustle — Sign Up For The Newsletter