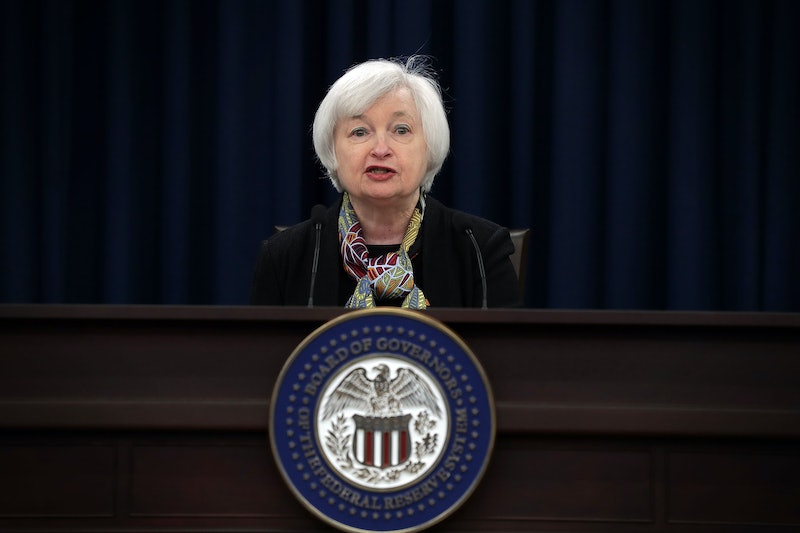 A recent speech by Chairwoman of the Federal Reserve Janet Yellen seems to have economists a little nervous about the state of the economy. In a speech at the Economic Club of New York on Tuesday, Yellen presented a cagey view of the health of the economy, delivering seemingly good news in a way that made it sound bad. And while the speech was a fairly routine summary of the activities of the Federal Reserve, the stirring in the financial community that her remarks caused means that everyone should be paying attention to its implications.

The Federal Reserve monitors the state of the global economy to help the American economy stay strong. The Fed can modulate interest rates by buying or selling government-backed securities and adding or removing money from the economy. The Fed was planning to raise interest rates up to 1 percent by the end of the year in order to fight off inflation, but has now changed its estimate to only .75 percent, as announced earlier this month.

This should be good news. The risk of inflation is down, so the interest rates don't need to be raised and more money can stay in the economy. But Yellen's remarks Tuesday have economists puzzled about the apparent inconsistency between the Fed chair's outlook and the stock markets, which have been doing well in the last several weeks. “Global developments pose ongoing risks,” Yellen said, pointing to China's slowing growth and the dramatic drop in oil prices. While the interest rate won't rise as much as was previously planned, there's still a deep wariness about the volatility of the global markets from the Fed head.

Of course, Yellen's hesitancy isn't necessarily a bad thing. Her cautious optimism is probably much less risky than a full endorsement of the economy and a corresponding plan of action based on current economic indicators. The global economy is so wildly intricate and unpredictable that any event could potentially have a devastating effect on the U.S. economy, and it seems better to safeguard the economy than to take bold action based on fleeting positive signs. However, the tone of Yellen's speech at certain points seemed to move beyond cautious into cautionary, as if the reactions of the global economy won't be conciliatory toward the domestic economy for much longer.

It's tedious and difficult to follow fiscal policy, but Fed actions mean more than just a minute change in your budding mutual fund. They're indicators of general economic health that trends on a macro, long-term level, and could be affect the millennial generation for years to come. In this case specifically, there seems to be a disconnect between the Fed's actions and the Chairwoman's words. It's deeply troubling to think that the Fed chair is having reservations about the economy that aren't being placated by the agency's actions. Following economic growth after Yellen's speech will reveal how well the market's really listened to the speech, and what might come for fiscal policy in the rest of 2016.

More like this
What Is Barack Obama’s Net Worth? He Makes *Way* More Now As An Ex-President
By Hugh McIntyre
Manchester Arena Attack 5 Year Anniversary
By Ella Glover
Michigan’s Governor Is “Going To Fight Like Hell” To Protect Abortion Access
By Andrea Zelinski
How To Fight For Reproductive Rights, Based On How Much Time You Have
By Courtney Young
Get Even More From Bustle — Sign Up For The Newsletter