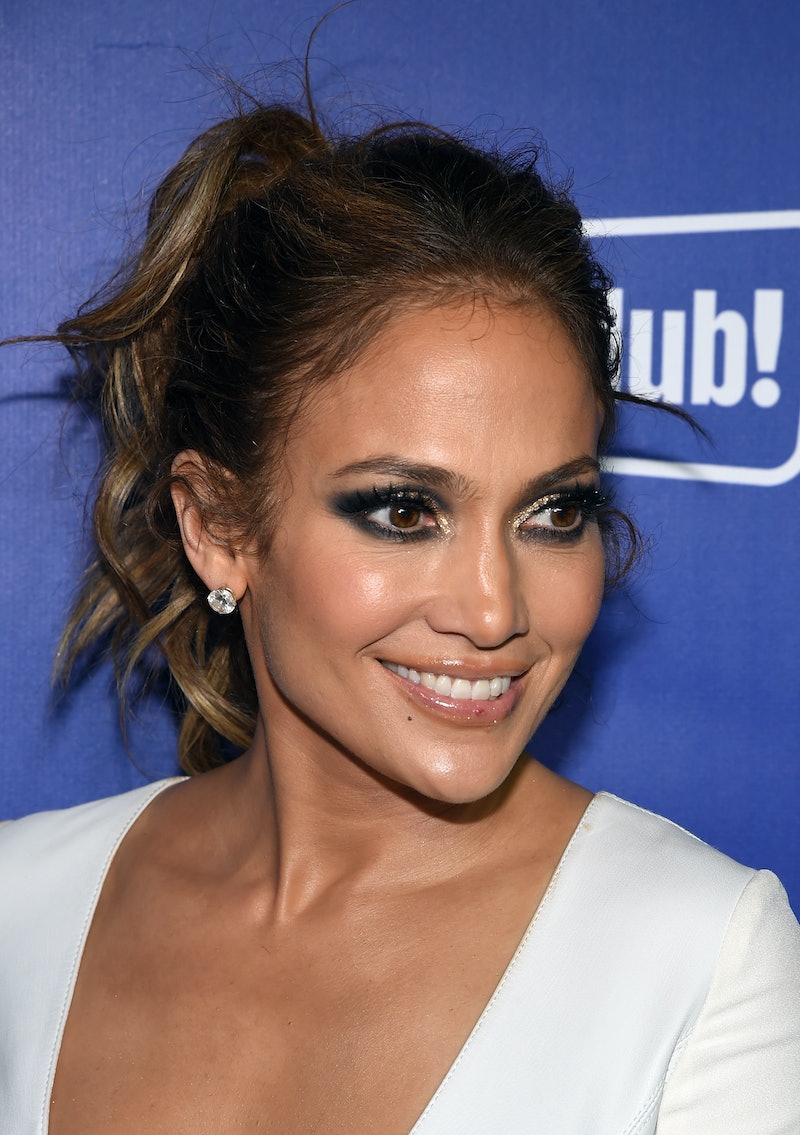 Something really beautiful happened on late night television this week, all thanks to James Corden. He has really been killing it with his Carpool Karaoke segments on The Late Late Show, and it seems like everyone wants a piece of the action, from Adele to Justin Bieber. The latest Carpool Karaoke guest was Jennifer Lopez, who had an amazing moment on the show involving Leonardo DiCaprio. When I say I love Jennifer Lopez and Leonardo DiCaprio, it's is a gross understatement. I have been obsessed with both for a long time, and J. Lo and Leo's Carpool Karaoke connection was a dream come true. On the show, we find out that Jenny From The Block has DiCaprio's number in her phone, and I immediately needed to know how these two even know each other.

Let's start from the beginning. Lopez was doing her thing with Corden, singing along to her biggest hits (and Bruno Mars, because it's Bruno Mars) while looking gorgeous as always. (She also sings a song in Spanish for which we weren't worthy.) Towards the end of the karaoke session (around the 9:30 mark), Corden asked Lopez about all most famous people she has in her phone, and J. Lo casually replies, "there's a few," which makes total sense considering she's who she is. Then, Corden did the whole world a magical favor by choosing to randomly text DiCaprio on Lopez's behalf.

When this happened, a tinge of jealousy came over me because I want to text Leo — always. But alas, I am not J. Lo. Corden composed an adorable, friendly text about where Lopez can "cut loose," and a little while later DiCaprio replied, “You mean tonight, Boo Boo? Club-wise?” The best thing about this, which Lopez points out, is that DiCaprio seems so genuinely helpful even though the text "she" sent was signed "J. Lo." So, have DiCaprio and Lopez known each other a long while? Do they text often? So many questions!

Upon looking at the close-up of the text, it looks like this is the first text Lopez has ever sent him (at least on this phone), so this might explain his swift response. Can you imagine Leo on his couch like "Wait, did Jennifer Lopez just text me, finally? REPLY!" I also love that he said "Boo Boo" — so adorable and sweet.

It was actually a bit difficult to track down any specific evidence on how these two could have exchanged numbers, but I am just going to boil it down to they are both super famous so they probably were at some event and it seemed like the thing to do. While they haven't had any projects together, they did both recently attend the 2016 Golden Globes, where DiCaprio won a Best Actor Globe, so I can imagine they bumped into each other and congratulations were given. Her current boyfriend Casper Smart was on her arm, so I am sure it was all friendly.

And now that they've I imagine that at some point maybe J. Lo can teach Leo how to refine his dance moves (I still love you) since we know his moves at Coachella were a bit rusty. Actually, the possibilities of this friendship are endless but I will just thank James Corden right now for making us all fall in love with both of them even more.

More like this
Long Live Bennifer!
By Allie Jones
Jennifer Lopez Found The Perfect Ben Affleck Throwback Video For Mother’s Day
By Stephanie Topacio Long
Joe Alwyn Reacts To Taylor Swift Earning An NYU Doctorate In A Rare Interview
By Jake Viswanath and Nicole Pomarico
Harry Styles Addresses The Theory That His New Song "Daylight" Is About Taylor Swift
By Jake Viswanath
Get Even More From Bustle — Sign Up For The Newsletter