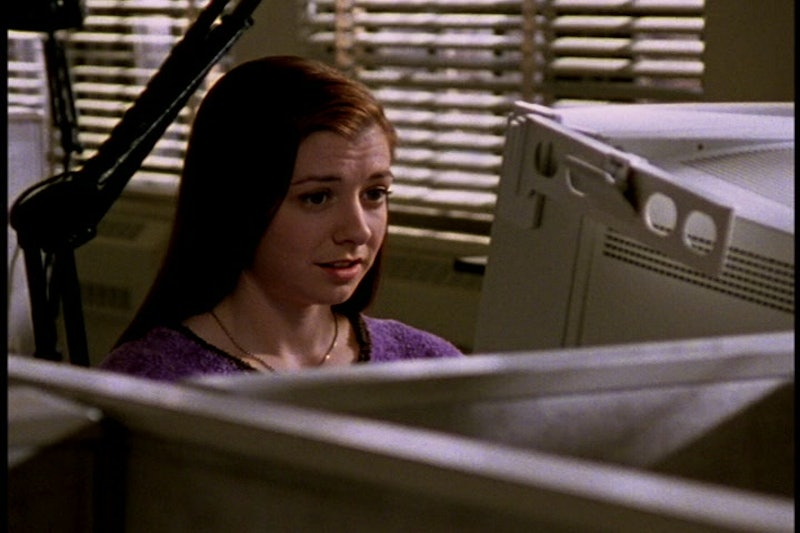 If you self-identify as a nerd, you know that nerdiness doesn’t just affect the kind of things you like to do or the shows and movies you like to watch. You’re nerdy in every aspect of your life, from work to romance, and if you were a nerd with a crush in the 90s, then your nerd-life wormed its way into your romantic desires, too. And if you crushed on people with half the intensity with which you obsessed about Babylon 5, then let’s just say that your love was a powerful thing.

The ‘90s were a transitional period for nerds, a time when “nerd” began to shift from a term of ridicule into what it is today: A term that doesn’t have nearly the negative connotation it once did and that serves as a badge of pride for many. Having a crush on someone in the 90s could be a scary thing if you were a nerd. Representations of nerds on screen tended to portray them as socially hopeless, squeaky voiced, and undesirable; when the nerds you saw on TV were characters like Urkel, Screech, and Violet Ann Bickerstaff (aka the lady version of Screech, played by Tori Spelling), it was easy to feel like being a nerd meant that your romantic life was going to be hopeless. As the decade moved forward, however, we started getting some much more positive nerdy role models, like Dana Scully and Willow Rosenberg, who showed us that you can be a nerd and be awesome at the same time (and that, in fact, nerdiness contributes to awesomeness).

Read on for 11 things you may have done if you were a nerd in love in the 90s.

You wondered if you needed a makeover to make your crush suddenly fall in love with you, à la She’s All That, Never Been Kissed, and Clueless.

If ‘90s teen movies taught us anything, it’s that nerdy girls can find love — as long as they get a makeover, first. In some cases (ahem, Laney Boggs), all you have to do to get boys to fall at your feet is remove your glasses! (Because glasses = NERD, right? Ugh). I love ‘90s teen movies as much as the next person, but they didn’t exactly spread the message that nerdy chicks should love themselves for who they are.

You + your crush = Scully + Mulder

When talking to your best friend about your crush, you likened the romantic tension between you and the object of your desire to the endless UST between Mulder and Scully (without the aliens).

You passed notes with your crush.

Nerds or not, people passed notes to their crushes in class because there was no texting, or Snapchatting, or twittering. Guys, it was the Dark Ages. Honestly, it’s shocking that humans managed to communicate at all.

Thus ends your history lesson for the day.

If you were friends with your crush (as opposed to a stranger, loving from afar), you tried to lure him or her in with top quality literature.

Which mostly included Anne McCaffrey novels and the Star Wars expanded universe. (Er, if you were me).

You couldn’t stalk your crush using social media, so you had to do it the old fashioned way.

That meant following him or her around the mall at a discrete distance. (It seemed less creepy then).

If you wanted to make contact outside of school, you had to actually call. On a landline!

One of the blessings that technology has given us is the ability to flirt from a distance; we can be as bold as we like using mobile tech, without ever having to leave the comfort of our homes or actually look anyone the eye. In the 90s, you actually had to call someone — and run the risk of having to ask your crush’s parents if he or she could come to the phone. It was excruciating if your were a nerdy introvert. That is, until email came along and changed everything...

As a nerd, you were into the electronic mail.

You were an early adopter of that new fangled Internet contraption, and you took to email like a Spice Girl to a platform shoe. It was the perfect way to flirt with someone without the awkwardness of actually having to have a conversation — but it all depended on whether your crush had an email address, which in the mid/late ‘90s was not at all a given.

Willow and Oz were your high school love template.

Until Willow and Tara got together, and then they were your love template. (Er, without all the stuff about Willow getting addicted to magic, what happened to Tara, or Willow almost destroying the world, obviously.)

Creating an America Online screen name was an intense process. Most of us saw it as a profound expression of who we were as people — every number, letter, and intentional misspelling of words like "girl" ("gurl") held untold insight into our deepest selves. So when you discovered your crush’s screen name, in true nerd fashion, you mined it for all possible meanings.

And you made sure your screen name was complimentary.

I’m not saying that you based you screen name selection on your crush… but I’m not not saying that either. No shame: If a screen name was a reflection of a person’s soul (which it was), then it was important that yours perfectly encapsulate everything great about you… in about 10 characters.

You fantasied about your ultimate dream date with your crush.

It mostly involved eating pizza, watching The Matrix, and then spending the rest of the night making out and analyzing every part of The Matrix. Which, let’s be honest, sounds like a pretty awesome date even now.