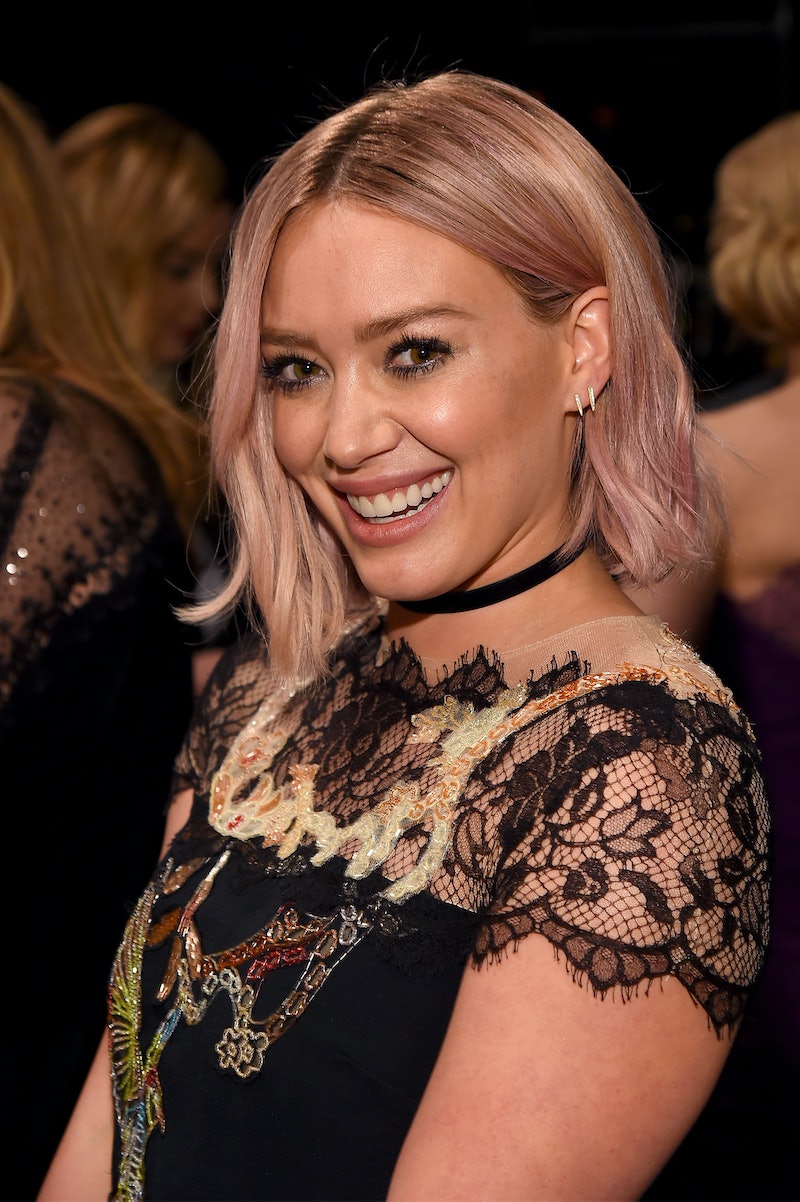 If you've ever felt weird about swiping right, have no fear: plenty of celebrities have admitted to using a dating app. Yes, it's true. More celebrities than you'd think have taken to their phones in the pursuit of love (or simply a casual hookup, this is a no judgment zone here!) and some have spoken candidly about their experiences with dating apps, further proving that celebrities are just like us normal people. Dating woes don't escape celebrities simply because they're famous, and that's actually so refreshing to hear.

It's funny to think about... I mean, can you picture Hilary Duff sitting around with her friends talking about some weird guy she had a Tinder date with over margaritas? It's easy to think that celebrities are somehow immune to "normal" experiences, such as awkward dating moments and hideously bad first impressions, but it's true: Celebrities play the field just like any of us do, and the only difference is that they run the risk of appearing on TMZ when exiting the restaurant after their date. It makes sense why they might try swipin' for love — dating someone in the entertainment industry obviously garners lots of attention and its own unique set of woes — so here are some celebs who have been open about their experiences with online dating apps.

Duff is perhaps one of the most outspoken celebs when it comes to her use of Tinder. In 2015, she admitted she was "talking to about nine different guys" on the app, saying it started as a casual curiosity. "It's true," she said on Valentine in the Morning:

I'm on Tinder. I was sitting with my friends one night at the house and we were joking around. In my life, I have always had really serious boyfriends. I've always met people through work and I have never been on a blind date. What's the worst that could happen?

She said that it was "wildly addicting," but added, "I have my first date tonight and I'm really, really nervous." Duff also wasn't sure if people realize that she's famous. "I think some people know. You only have your first name. Some people don't know. I think some people act like they don't know but they do. And a lot of people are like, 'This is a joke, right?'" Aw, girl.

OK, so I can't confirm if the pop princess has actually used an app to find romance, but I do know that she has a Tinder account, thanks to Jimmy Fallon. Shortly after splitting from then-boyfriend David Lucado in 2014, the late night host was kind enough to create an account for Spears, adding, "She's recently single, she sings good jingles, she loves her Pringles and she's ready to mingle." She seemed uncomfortable at the prospect, but who knows? Your next connection could be with the biggest pop star ever. Dare to dream, guys.

Rousey's fame has skyrocketed just as quickly as her fighting career, but there was definitely a moment where she wished she was less famous. Why, you might ask? Well, so she could use Tinder, of course! In 2015, Sports Illustrated reported that Rousey tried using an alter ego on Tinder, but it didn't work. "Sh*t, the only person I'm making out with is my dog," Rousey told the magazine. While she struggled to find success on the app, it seems like Rousey's dating woes have disappeared — she's been in a relationship with fellow MMA fighter Travis Browne for several months. No word on if they met on Tinder, though.

Perry seems to be cozying up to Orlando Bloom these days, but the pop star once attempted to look for romance on Tinder. Back in 2014, when her romance with John Mayer was on-again/off-again, Perry was asked if she was still single during an interview with Power 105.1's The Breakfast Club. She quipped, "Uh, yes I am, hello," before adding, "I'm really deep on Tinder so I don't have a whole lot of time." To make things a bit confusing, Perry seemed to backtrack on these comments to Harper's Bazaar, revealing how she meets guys. She said,

Well, I'm not really on the street. It's usually just through friends of friends. We have a lot of dinner parties. I'm definitely not on Tinder, even though I joke about it. Sometimes I feel like a sense of humor does not translate into print.

I'm a bit puzzled by this, but it seems like she's super happy with Bloom, so I guess it doesn't matter anymore.

The funny lady isn't shy about much in her life, so her candor when discussing her love life shouldn't come as too much of a surprise. When discussing the matter on her former E! show Chelsea Lately, the comedian revealed that she was intrigued by the idea of Tinder, saying,

I'm going to go on Tinder, I just keep forgetting to. I would, I don't mind that idea at all. You can verify me, I'll verify that I'm me. Or you could just text me and I'll text you back and say, 'I'm famous, let's f*ck' ... I don't want to hook up with famous people, I want to hook up with regular people, men on the street. I like anonymous random men. That's exactly what I'm looking for.

So, Lohan hasn't admitted openly that she's actually on Tinder, but she pretty much outed herself when she posted a screenshot of her brother Michael on the app. She'd have to have an account to browse other users, so it's safe to say that Lohan has used Tinder at one point or another. It seems she's found love with 22-year-old Russian heir Egor Tarabasov, but it's unclear if the couple met by swiping right on each other.

The Bravo executive has no qualms about admitting his love for Tinder. He told People in 2015, "I have no shame in my game. I'm there, I'm swiping. I like it. It's fun. You know, it's to me: Where am I going to meet an architect who lives in Brooklyn besides Tinder at this point? It's the modern-day singles bar." Totally valid point, sir.

The Modern Family actor discussed the woes of meeting someone as a famous person in an interview with Howard Stern in 2014. He said,

On Grindr, I think it's a hundred percent, you're getting your d*ck sucked or you're f*cking somebody. That's for sure. On Tinder, there's a decent chance [of a date] but it's all based on immediate physical attraction. So you just swipe through people and you see pictures and you either say "like" or "nope" ... I've gone out with a couple girls in L.A. that I met on Tinder, like on real dates. It's hard to meet people.

He repeatedly praised the app in the interview, and said he loves using it. So there you have it.

The supermodel loves Tinder so much, she teamed up with the popular app to star in a campaign for them. After splitting from boyfriend Leonardo DiCaprio in 2015, she starred in an ad for Tinder's "Super Like" feature, and said in a statement,

I've always been passionate about connecting with people, so the opportunity to collaborate with the talented team at Tinder is so rewarding. What I like most about Tinder is that it has given women the power to decide who has the ability to communicate with them. Super Like enhances these powers by allowing them to invite the people they want to engage with.

Empowering and rewarding — what a combo.

Though he didn't find eternal love on The Bachelor, Flajnik had much better success on Tinder. He told The Huffington Post, "I found [love] on a dating app. Just swipe right, swipe right.” Yep, it's true: Flajnik met girlfriend Stephanie Winn on Tinder.

Nowadays, Groban seems to be happily coupled up with actor Kat Dennings, but there was a time back in 2013 when he wasn't feeling so great about his romantic prospects, apparently. Groban tweeted, with no explanation or further insight:

No word on if he followed through, but he seems very happy in his current relationship, so all's well that ends well, right?

The Patriots player had plenty of good tips to offer people afraid of testing the Tinder waters, but admitted he hit his fair share of roadblocks. In an interview with SVP & Russillo on ESPN Radio, he said, "No one believed it was me. It was fun, though! I was writing messages. We were all laughing, it was during training camp, we all needed a good laugh. We had a blast!" As for his advice to Tinder newbies, he suggested not being too picky, and he also praised Tinder's given pickup lines. "Use the pickup lines they give you. Type in 'pickup lines on Tinder' and use those lines." Finally, he offered this sage advice: "You can't be too serious, it's Tinder!" Truer words were never spoken.

Cook used his signature raunchy brand of humor to admit that he doesn't actually care for Tinder, though he is on the app. In an interview with LaughSpin in 2014, he said,

I’m on Tinder. If there’s one thing you know about me I will use tech in any way to promote. And once I knew Tinder was the thing, I was like "How can I use this to my advantage?" So I got on Tinder and I put my Troublemaker ad on it ... Now everyone in the circumference that’s searching, they’re seeing me. And maybe it’s a subliminal thing like, Dane Cook? Why is he on here? ... And then I break up and I’m not with my girl anymore and I’m going to see what the power of Tinder really is. I wanted to really find out how people behaved on it.

Prior to this admission, he tweeted,

Perhaps he had a change of heart.

So, for all of you Tinder users out there, you never know who you may come across when you're casually swiping through. Exciting, right?

More like this
Selena Gomez Has Been Spotted Having Fun With A Top Film Producer
By El Hunt
Are Virgo & Capricorn Compatible In A Relationship?
By Kristine Fellizar
The Best Time To Date After A Breakup, According To Experts
By Bustle Editors
'Indian Matchmaking's Arshneel Is Keeping His Potential Courtship With Rinkle Private
By Radhika Menon
Get Even More From Bustle — Sign Up For The Newsletter