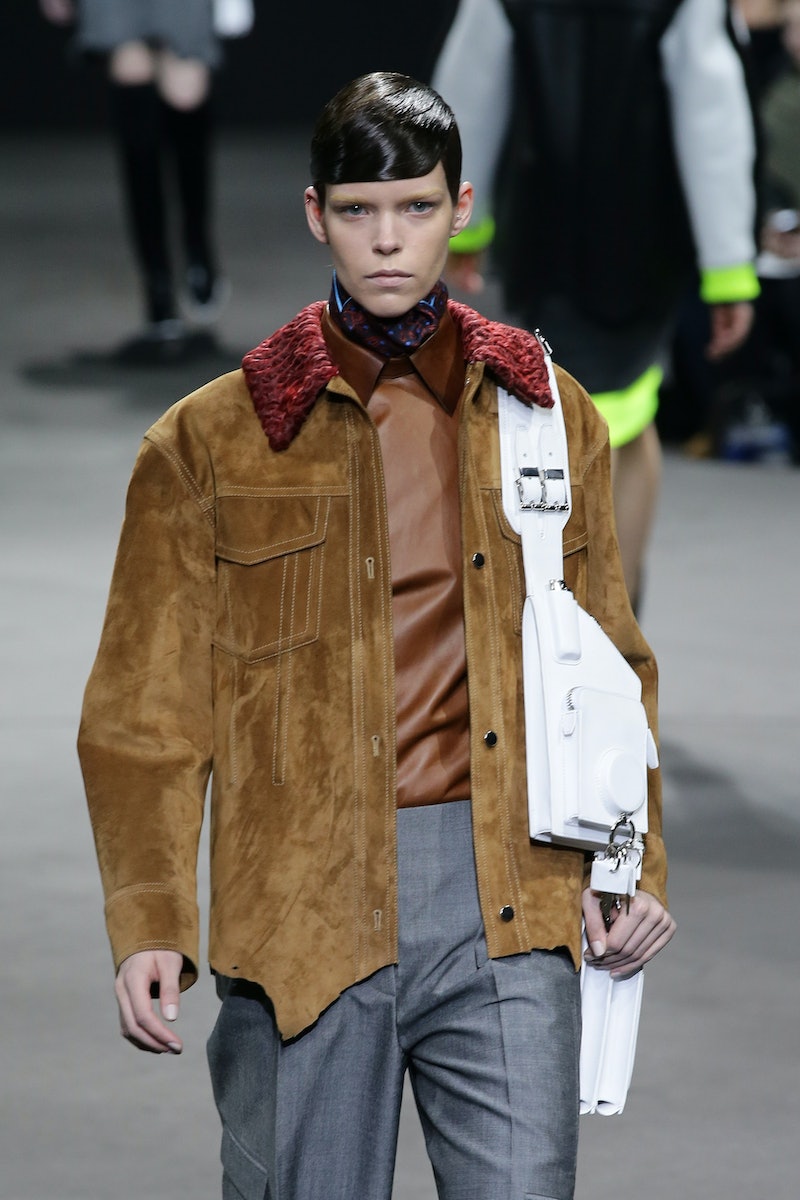 For years, Alexander Wang's name has been synonymous with cool. People love to throw around phrases like "tough-girl street-wear," "sexy, tough, cool-girl attitude," and "Wang is the coolest kid of them all" when describing his aesthetic, and a quick peek at his Spring 2014 ad campaign affirms all that hype. But Saturday's Fall 2014 show was an entirely different ballgame, one in which the very idea of cool seemed a little bit ridiculous and so entirely besides the point. Is the designer turning away from his cool-girl roots and onto something a little bleaker?

Style.com reported, "Wang has been shrinking from his so-called downtown reputation" about his Fall 2012 RTW collection, and nowhere was this abandoning of "cool girl" cred more apparent than during Saturday's show, two years later. Not that there wasn't a gloss of serious cool involved — the event took place in Brooklyn, after all — but the collection was sharply androgynous, focused almost single-mindedly on the idea of survival (think: jackets with numerous pockets, shin guards, bags with detachable compartments). And when you're concerned with surviving, sexy and downtown and It Girl and the like simply aren't on the table.

The show was leached of sex appeal, opting instead for ugly-chic, utilitarian style; the models' hair was combed dramatically across their foreheads, with ponytails tucked into collars to mimic short hair. Their brows were universally bleached, their faces were left bare. Though the harsh-cheekbones faces and high necklines had their own intrigue, it's hard to imagine the girl charmed by last season's "Parental Advisory: Explicit Content" shirts or cheeky miniskirts wearing the bulky jackets or knee-length tailored shorts of this collection. This is no hip, wet-hair, off-duty-model wardrobe; this is serious fashion, in the way that wearing clothes in a snowstorm is serious fashion.

Is this the future of Alexander Wang? It's a harsh one, and there's nothing rose-colored about it. Is Wang redefining cool or abandoning it altogether? Is he alienating the Wang-wearing girl of the past, who likes her t-shirts soft and her skinny jeans in black leather — or is he searching for a new Wang girl altogether, one who doesn't mind grease in her hair and snow in her face?

More like this
Here Are All 703 Outfits Rachel Wore On Friends
By Kat George
Not Sure How To Style Bangs? Make These Easy Hairstyles Your Go-To
By Olivia Rose Ferreiro
This Week’s New Makeup Releases & More Beauty Headlines
By Audrey Noble
7 Hair Color Trends Of 2023 That'll Inspire Your Next Dye Job
By Jordan Murray
Get Even More From Bustle — Sign Up For The Newsletter