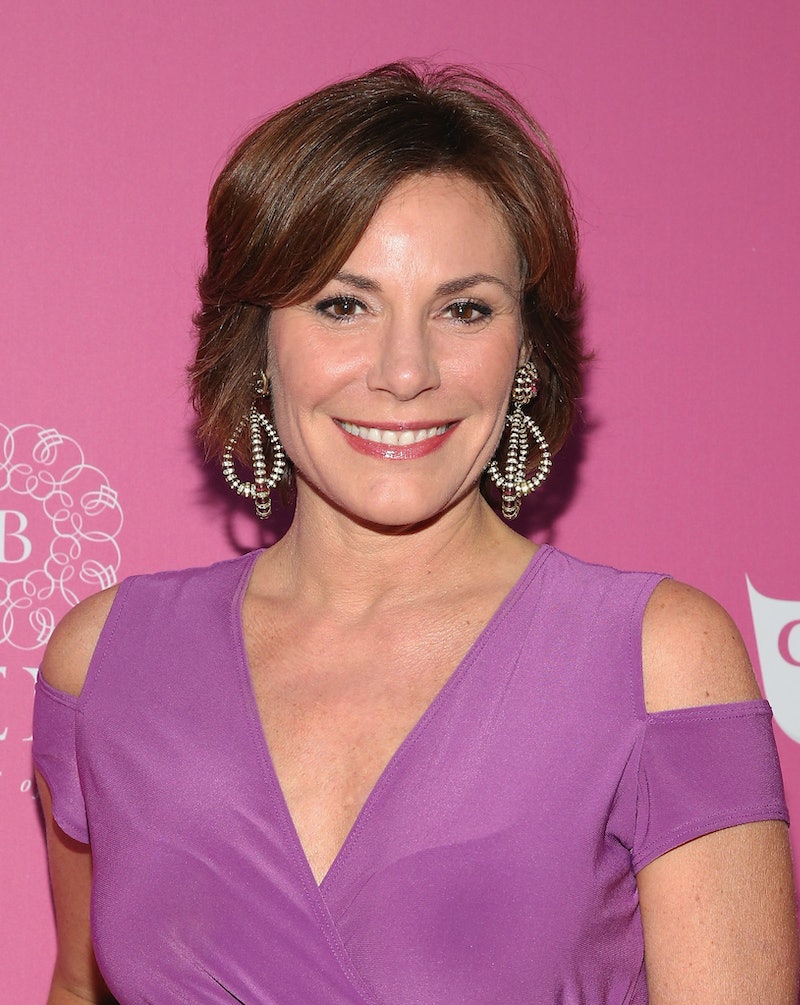 As you may have heard, Real Housewives of New York City star LuAnn de Lesseps is getting married to Thomas D'Agostino Jr. The two officially announced their engagement in early February, and now the happy couple is planning their nuptials. As you can imagine, it is going to be quite the event — would you expect anything less from The Countess? If you didn't know, de Lesseps is tying the knot on New Year's Eve of 2016, which certainly is a memorable way to ring in the new year and will also make for an amazing party for all of her guests.

While chatting with People about her big day, the "Money Can't Buy You Class" singer dished, "I plan to make it a weekend to remember, with a cocktail party on a private yacht kicking it off." Um, how can I score an invite to this soiree? It will be a destination wedding held in Palm Beach, Florida, and it just so happens that her wedding day is also D'Agostino Jr.'s 50th birthday. I don't think they could make the day more special if they tried.

Unlike her first wedding in 1993 to French count Alexandre de Lesseps in which they eloped, this time she wants more tradition, including a Catholic priest officiating. Plus, she is inviting 200 guests and even hosting a New Year's Day brunch for everyone. Yeah, she is going all out this time around.

If that isn't enough, she also told People there will be some "special friends" invited. What the heck does that mean? Who knows, but what I do know is that de Lesseps is head over heels in love. "We are so happy, and I'm grateful to have found a love and a soulmate the second time around," she said. "Tom is a great catch."

There's no doubt that de Lesseps has loosened up over the years and isn't so strict when it comes to following etiquette. But, as much as she wants everyone to have fun at her wedding, I'm also sure that she wants her guests to be on their best behavior. Just because it's NYE doesn't mean everyone should get out of control.

With that, here are a few rules I'm sure The Countess wants her guests to take note of before strutting onto that private yacht.

No Talk About Your Yacht

The the last thing she probably wants to hear is about how your yacht is so much better than hers, so just keep those type of comments to yourself.

Keep Your Alcohol In Check

Let's face it, sloppy isn't classy. So, be sure to hydrate with water between each drink, because no one wants to babysit someone all night long.

Focus Should Be On Her

Yes, it's New Year's Eve, but all eyes should be on The Countess and not your New Year's Resolution.

No Complaining Or Suggestions

Clearly, she's working hard at planning the perfect wedding, so don't complain about anything that you don't like. More importantly, don't give her suggestions or tell her how you would've done something different.

Leave The Drama At The Dock

Seriously, no drama once you step onto that yacht. That's the last thing The Countess wants or needs to deal with.

Get Into The Wedding & New Year Spirit

There's nothing worse than a Debbie Downer at a party or a wedding, so at least try to have some fun.

A Kiss At Midnight Is A Must

Obviously, this is going to happen. Even if you go to the wedding by yourself, it's not like you can't find a fellow wedding guest to kiss. Even better, plant one on that bottle of beer or Ramona Pinot Grigio in your hand.

You Better Show Up To Brunch

There are bound to be quite a few guests who wake up with a hangover (hey, it's a wedding and NYE), but that doesn't give you an excuse to miss the special New Year's Day brunch she has in store for everyone. Just think, the food will probably cure your hangover.

Basically, just be cool all weekend, because it's the right thing to do.