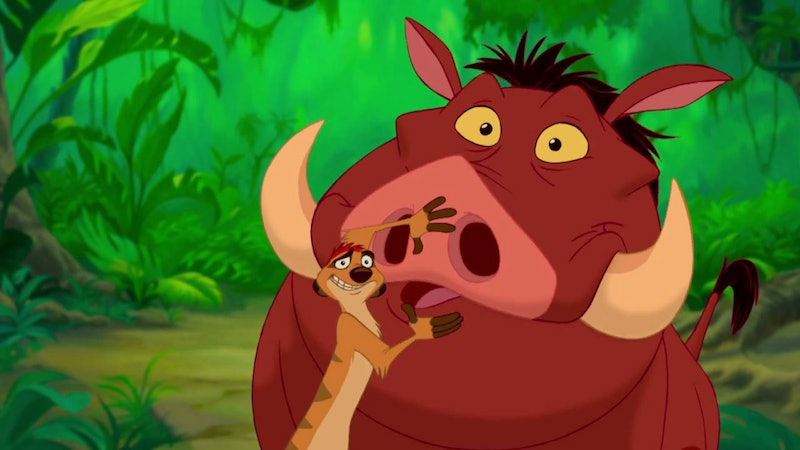 What would a hero be without a sidekick? A whole lot less funny, for one thing. Movie sidekicks steal the show because they liven things up. Without Ron and Hermione, Harry's angst would have spiraled out of control, and can you even imagine Star Wars without Chewbacca, R2-D2, and C-3PO? I didn't think so. As long as there have been movies there have been sidekicks, and the '90s were a particularly great decade for scene-stealing second bananas.

From an animated dragon in Mulan to Jeff Goldblum in basically everything, '90s sidekicks were dominating the heroes of the story with their quick wit, skill, and sometimes even their adorableness (there was basically a whole genre devoted to cops with dog partners). Part of the appeal of sidekicks is that they are the relatable ones. Not many people get a chance to save the world, but almost everyone has dropped a perfectly timed one liner at some point in their lives. The '90s were all about lifting up the underdog and as a result, the decade is full of movies featuring little guys with big personalities who totally steal your heart (and the movie).

The 11 sidekicks on this list walked away with the show and never looked back.

Robin Williams' Genie was a ball of manic energy and pop culture references. The moment he appeared in a scene, Aladdin had no choice but to sit back and let Genie take center stage.

Right from the start, Dr. Malcolm points out all the potential problems with having an amusement park full of dinosaurs, and he ends up being right about everything. Add in his flawless sarcasm and adorable twitchy, genius routine and even the T-Rex was ready to bow before him.

Sometimes being the sidekick means being the ultra-serious, capable one who keeps the hero from plunging off of a cliff. Trinity was that kind of sidekick. She was serious, deadly, and could do cool stuff way before Neo figured out how to do anything.

If Simba had never run into Timon and Pumbaa out in the jungle, The Lion King would have been a total downer. They taught Simba and the movie how to have fun again.

As the 12-year-old apprentice of an assassin, Mathilda was the heart and soul of the movie. Even Léon, who was the character going on a hero's journey, stood back and let Mathilda's searing pain and ferocity guide the story.

Becky is the quintessential best friend sidekick: she is funnier than her BFF and is not afraid to be brutally honest. In other words, she is a total hero.

Austin Powers was so over the top that you would think it would have been impossible for any single character to walk with the movie, and yet, that is exactly what Mini Me did. Even Dr. Evil couldn't hold back his double from getting the biggest laughs.

Oda Mae is flawless. Her paraphrasing of Patrick Swayze's messages to his girlfriend are by far the most memorable part of the movie. Forget "ditto" — Oda Mae owned Ghost.

A sarcastic talking cat who is also a heroic, centuries old boy? Yeah, even the Sanderson Sisters couldn't compete with that.

Mulan could have been an intense film if not for Mushu hanging around with his sass and charm as the adorable little dragon who refused to let Mulan give up.

It may not be cool to admit you liked the George Clooney Batman, but I think everyone can at least agree that Chris O'Donnell as a sexy, angsty Robin was one of the '90s best sidekicks.