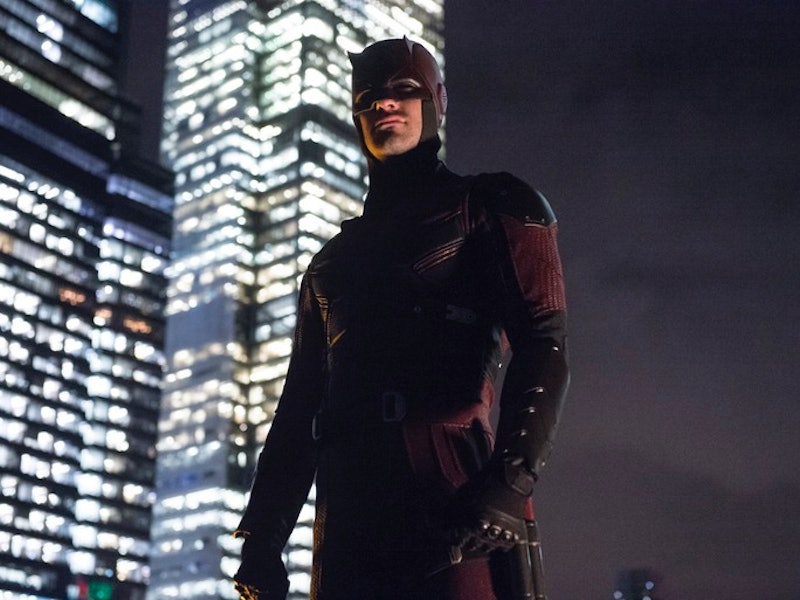 Superhero movies, for all their attractive qualities, can be pretty ridiculous. It's not entirely their fault — comic books, especially the old ones, are not particularly known for their subtlety. It doesn't matter how hardcore or dark the adaptation is, any onscreen superhero is going to say some completely insane and hilarious things, especially when dramatic showdowns are involved. Daredevil, the blind superhero who protects Hell's Kitchen from bad guys and organized crime using ninja-like fighting skills and heightened senses, is no exception. Marvel's Daredevil has appeared in multiple animated television shows, but his most famous turns on the screen are 2003's Daredevil movie starring Ben Affleck and the the current Netflix series Daredevil starring Charlie Cox. And in both, man, does this hero say a lot of dumb stuff.

For the record, I love Daredevil. I love him on Netflix and, yes, I love him as played by Ben Affleck (I don't care what anybody thinks, 12 year old me was really into Daredevil). But that doesn't mean I think everything he says is completely rational. I mean, really, how many times can a man wax poetic about saving "Hell's Kitchen" when that's literally not even a third of New York? Besides, any guy who puts on a Power Rangers-inspired leather outfit to fight crime at night has got to be at least a little crazy. Thus, here are 11 insane things Daredevil has said in movies and television.

Let me stop you right there, Daredevil. If you're already defending your brand of "justice" then maybe you need to check yourself.

2. "The mind controls the body, the body controls our enemies, our enemies control jack sh*t by the time we're done with them" — Daredevil (1x07)

This is technically a mantra taught to Matt by Stick, but it's just so ridiculous, I had to include it.

3. "My remaining four senses functioned with superhuman sharpness. But most amazing of all, my sense of sound gave off a kind of radar sense!" — Daredevil (2003)

To be fair to Daredevil, this was said over voiceover, but it is still ridiculous. I think I speak for everyone when I say that Daredevil's super powers are better left unexplained.

Daredevil's whole no kill policy is pretty much garbage. It's not that I think Daredevil should just go around killing criminals, but if he's going to put people in the hospital with fatal injuries, can he really defend himself that strongly?

Putting aside the fact that Daredevil continues to be a vigilante after declaring that vigilantes are over, this statement is laughable considering the Marvel Universe Daredevil himself is a part of. Vigilante days are clearly not over, because Marvel has like a billion other superhero franchises to promote right now.

Truly one of the most hilarious mid-fight quips of all time. Also proof that Daredevil might memorize the subway schedule, a thought that tickles me to no end.

Matt Murdock uses this charming line on Elektra in the 2003 Daredevil film, and... it sure is something.

Yeah, OK, but you also decided to "do something about it" while wearing a red leather suit, so...

9. "They say your whole life flashes before your eyes when you die. And it's true, even for a blind man" Daredevil (2003)

I honestly can't tell if this is supposed to be clever or not.

This Daredevil quote might sound somewhat logical, but in reality, it's completely insane. The whole lone wolf phase is something all superheroes go through, but that doesn't make it less idiotic. Stop brooding, Matt Murdoch. You need your friends.

Every time Matt Murdoch/Daredevil talks about saving "Hell's Kitchen," something happens and everybody living in New York rolls their eyes. Yes, it is a real neighborhood, and, yes, some people do call it that, but it's not really as prevalent as you might thing by watching the show. It's also an incredibly dumb constraint on Daredevil's "justice." In a world where aliens have invaded the earth ( Avengers ), I think Daredevil should be able to bring himself to step into other parts of New York City. At the very least, he can cover the entire West side of Manhattan.

Daredevil might not be the sharpest tool in the shed at times, but he's the hero we're stuck with for now.