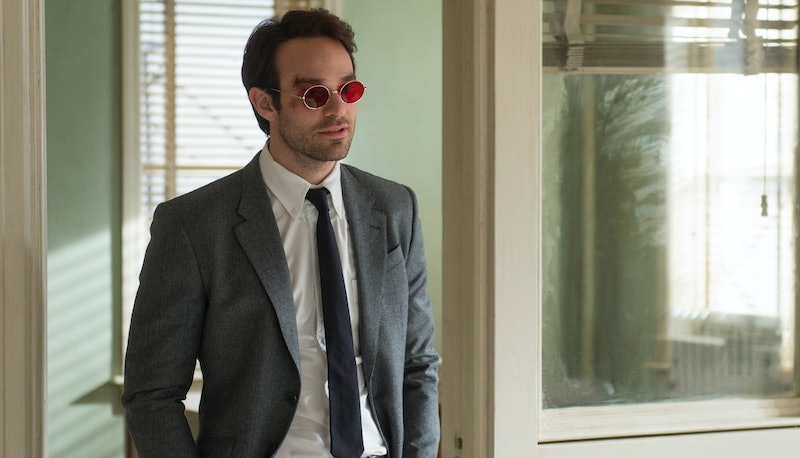 After the travesty that was the Ben Affleck Daredevil movie back in the early '00s, it's high time to give this property the redemption is deserves. But, since Daredevil isn't exactly one of Marvel's more high-profile heroes, it's understandable you might wonder what Daredevil's powers are. Thankfully, we're here to give you the rundown on everything you need to know to get ready for Netflix's Daredevil series.

First things first, let's talk about the character. Daredevil's identity in the real world is Matt Murdock, a lawyer living in the Hell's Kitchen neighborhood in New York. When he was younger, he was blinded by a radioactive substance that fell from an oncoming vehicle, and even though he lost his sight, his other four senses were heightened to a superhuman level. As in most Marvel comics, Matt was motivated to fight crime by the death of a loved one — in this case, it was his father, a boxer who was killed by gangsters after he refused to throw a fight. Matt became Daredevil in order to avenge his father, and so "the man without fear" became a crime-fighting superhero. Pretty cool stuff, right? I think so.

Now that we've got the backstory, let's get down to business. Spiderman has his spidey senses, Captain America has his shield, and the Incredible Hulk has, well, his hulk-iness, but what does Daredevil have in his arsenal? Here's what you need to know about his abilities.

His Superhuman Hearing Helps Him Act As A Human Lie Detector

When Murdock was blinded, his other senses were heightened, which is pretty sweet and also incredibly useful. He can use this superhuman ability to act like a human lie detector — since he can hear a person's heartbeat in their chest, he'll know if a question he asks makes their pace quicken and gets them nervous, possibility indicating they might not be telling the truth. On the flipside, though, too much noise can overwhelm and weaken him.

He Has What's Known As A Radar Sense

This is similar to "proximity sense" that martial artists claim to have. Essentially, he knows when someone's nearby, and his ability to detect them is stronger than the average human's. This is especially useful given that he can't see, so it's important that he knows when attackers or enemies may be approaching.

He Can Read With His Fingers

I know what you're thinking, but no, it's not just that he can read Braille. Daredevil's sense of touch is so strong that he can read words in print, so long as he can touch the ink. If a page has been laminated, he won't be able to decipher it, though.

So this technically isn't a superhuman ability, but it's still pretty badass. Like his father did, he knows how to box, and he's also trained in Jiu-Jitsu, hand-to-hand combat, kung fu, judo, and more.

Not only does Daredevil have plenty of physical superpowers, but he has some mentla ones, too. He has an encyclopedic knowledge of the law, is a skilled detective, tracker, and investigator, and is an expert marksman. You know, all of the good qualities you want in your average attorney-turned-superhero.

This article was originally published on April 9, 2015