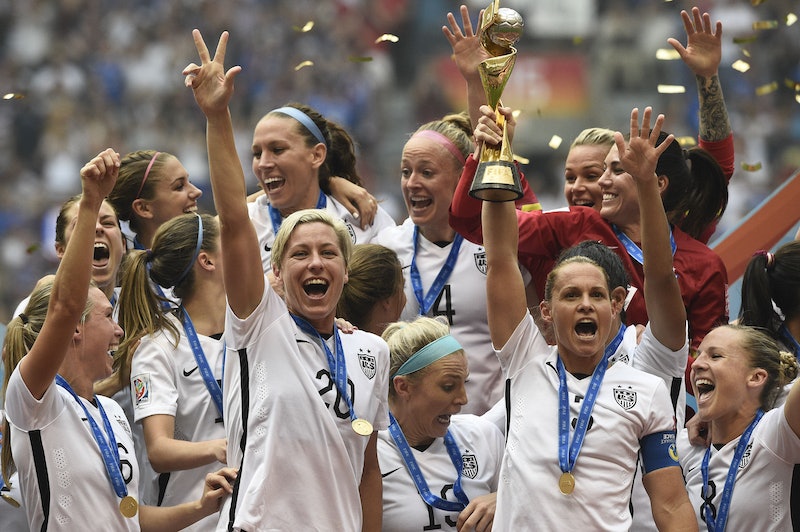 As you may have heard on this joyous morning, several U.S. Women's National Team players filed a complaint with the Equal Employment Opportunity Commission (EEOC) on Thursday, March 31, alleging wage discrimination based on their gender. In a statement, the United States Soccer Federation (USSF) remarked that they had not seen the complaint and therefore could not comment on the details specifically, but that they are "disappointed about this action." As a fan not only of women's soccer, but also of women's sports in general, my immediate response to this was something along the lines of "Yessss!" followed by a rousing chorus of "Go get 'em!" This lawsuit has the potential to be big, for soccer and for all women's sports — and given the state of women's sports, both professional and otherwise in this country, we need that.

The U.S. Women's National Team Players — aka the reigning World Cup Champions — claimed in the federal complaint they've filed that U.S. Soccer, the governing body for soccer in the United States, pays its female players as little as 40 percent what it pays the men's team, and ask that the EEOC investigate why that is. U.S. Soccer has stated that they have not yet reviewed the complaint; they added, “We've been a world leader in women's soccer and are proud of the commitment we've made to building the women's game in the United States over the past 30 years."

If the 40 percent figure is correct, however, I would also like to hear an explanation, given that the women's team has been undeniably successful at winning games and representing the United States well in international sports, whereas the men's team... has not. The U.S. Women's National Team has won three World Cup championships and four gold medals in their brief three decades of existence. The men's team has never won either of those things despite existing for over a century. Their greatest claim to World Cup fame was taking third in the World Cup in 1930 . Nevertheless, FIFA awarded the women's team $2 million for winning the Women's Cup in 2015... and gave the U.S. men's team $9 million for losing in the round of 16 the year before. The Men's World Cup winners, Germany, took home $35 million from FIFA.

As Bustle's Alex Gladu wrote in 2015 after the Women's World Cup win, "In all, FIFA set aside a grand total of $576 million for the most recent Men's World Cup winnings. This year, the organization set aside just $15 million for Women's World Cup winnings. FIFA's secretary general at the time, Jerome Valcke, suggested that the difference has to do with revenue, calling the comparison between men's and women's winnings 'nonsense'" in a press conference in December of 2014. If the claims in the current complaint filed with the EEOC are supported, it will become abundantly clear that FIFA isn't the only organization to drastically underpay female players.

The sad thing, though, and the part that truly frustrates me, is that none of this seems shocking. Because when it comes to women's sports there's an assumption that, well, of course women are paid less. Of course the games are rarely televised. Of course fantasy sports sites don't include the WNBA. Of course there are no women's college football teams, no paid, professional women's baseball. Of course. Because it's women's sports.

It's an attitude I find frankly baffling. After all, if it was revealed that a company was paying its female employees 40 percent of what it paid its male employees, the instant news of it broke, there would be boycotts, petitions, investigations, news segment after news segment. People would be appalled. But when it comes to female athletes, even though I think more and more people are genuinely beginning to care about pay equality, there still exists this sense that, well, of course. Because it's women's sports.

There are, I think, a lot of reasons for this. For one thing, women are not socialized to think of sports as something that's "for them," either as players or viewers. It means fewer women watch sports, and are thus less likely to hear about pay discrepancies in sports or to feel emotionally invested in the problem if they do.

For another, women's sports suffer under the misconception that they aren't as good as men's sports which not only drives away the necessary viewers to help legitimize the value of the games, but also makes it seem as though women are being paid less because they truly are less good at their jobs. As though their pay is not "unequal" or "unfair" or "discriminatory," but rather just a measure of their abilities — when in truth nothing could be further from reality. Women who play sports work just as hard, train just as intensely, and are every bit as much fun to watch as male players.

And while it's more difficult to address the gender gap in things like corporate endorsements or ad revenue, it should be fairly easy for women representing the United States well to be paid as much as the men who represent the United States, or for organizations to pay the same amount in prize money to male and female athletes. And yet of all the many national and international sports, the only major sport where prize money is equal between men and women is tennis — which didn't become reality until 2007.

We're all conditioned to accept that female athletes are less important, less valuable, less worthy of recognition. It's seen throughout the sports world. Arguably the most successful women's sports league, the WNBA, is entering their 20th season, but female players are still paid a fraction of NBA players' salaries, and you still can't find all their games on ESPN or play WNBA Fantasy online. Women's hockey only got a paid, professional league this past year, but the league is only part-time and the highest player salary is $25,000. Even tennis, where prize money is finally equal, some don't think it should stay that way. Meanwhile, despite being the two most popular men's sports in the United States, there is no women's paid professional league for either baseball or football. But even so, football still finds a way to be unfair to women by underpaying its cheerleaders.

I'm a female sports fan, and a fan of female sports. It means that no matter where I turn, I'm often confronted by sexism. Watching male sports, it's hard to forget the many ways in which leagues and teams treat women as less than people. Watching women's sports, it's hard not to notice the smaller arenas, the lack of ESPN coverage, the lack of name recognition. Much as I love being able to take advantage of cheap tickets, being able to go to a playoff game for $25 is bittersweet when you know it means less pay for the players you love.

As a woman, and as a fan, this sort of inequality gets to you. It's always hard to be confronted with reminders of the fact that society still sees you as "other" or "less-than." And in sports, those reminders are all around you, no matter which league you watch.

Trying to achieve equality in sports is a long and difficult process. It's not going to change overnight. But it's time for us all to accept that it is a problem, and one worth fighting for. When even women who are the best in the world at what they do can't earn the same money as their less successful male counterparts, it is no longer a question of women not being "good enough" at sports to justify earning big money. It's not about women's abilities; it's about the glass ceiling that still refuses to break no matter how many cracks we put in it.

Women shouldn't need to be the best in the world at what they do for their abilities to be valued. But the fact that even women who are still don't get financial equality is a travesty.