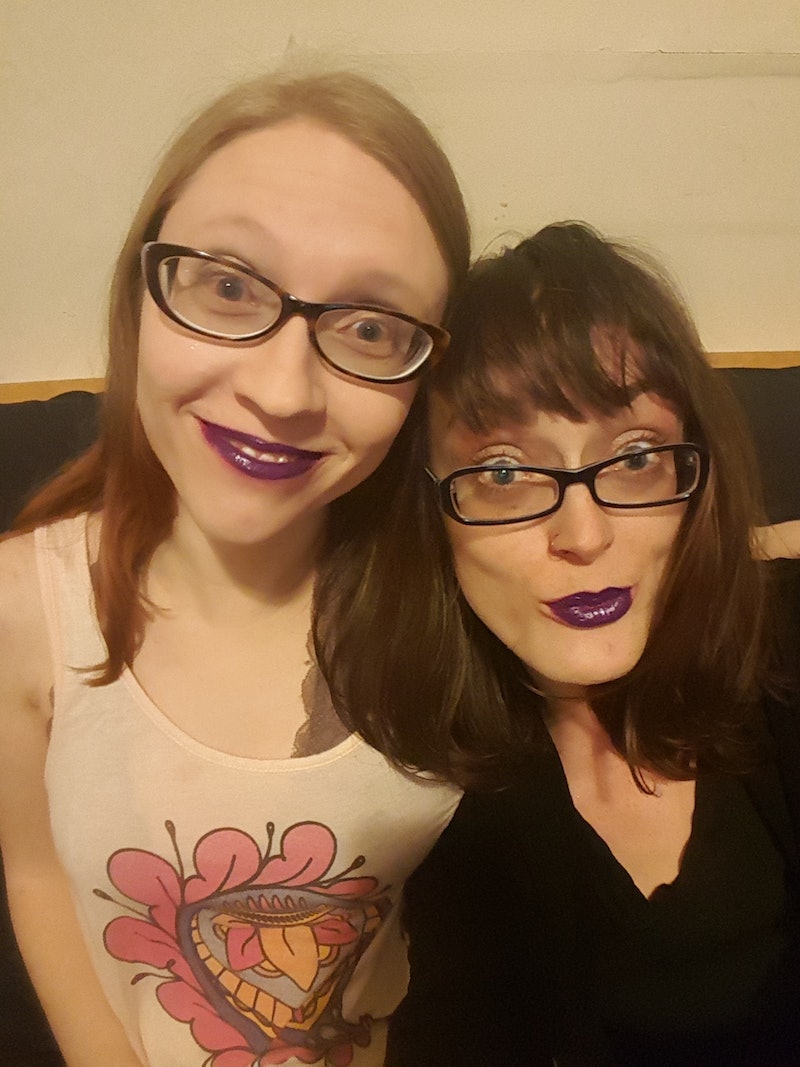 My girlfriend and I were out for drinks at a bar about a year ago. And by girlfriend, I mean "romantic and sexual partner who is a woman," not "friend who is a chick.” A clueless-yet-well-intentioned mutual acquaintance came up and sat next to us, telling us that she had just left another bar because she didn’t want to be a third wheel for the straight couple she knew there, but she was glad she had run into us because she didn't want to drink alone. My girlfriend and I just looked at each other and sighed.

I was outed as queer at 14 in school, I came out to my parents when I was 17, and I had my first relationship with another woman when I was 18. I never looked back or treated my relationships with women any differently from those with men and I grew up in Vermont, so even now I’m always a little surprised at the ignorant comments and questions I occasionally hear when I’m out with one of my girlfriends.

As a femme-presenting agender queer person, I can only speak from my own experience of being in queer relationships, so this list is definitely not exhaustive, but here are some things that queer couples are sick of hearing. First, check out the latest episode of Bustle's Sex and Relationships podcast, I Want It That Way:

Yup. Actually had some dudebro say this to me when I was walking through the park holding hands with my then-girlfriend.

I mean, I get it. Lesbians are pretty mythical creatures. I just figured, what with it being 2016 and all, that you would be kinda used to it by now. Maybe you were a transplant or new college kid and we really were an exciting new sight, or maybe you're just an a-hole, but generally queer folk prefer not to be reduced to our sexuality, thanks.

Or husband, or wife. Because, obviously, we queer folk model our relationships on straight ones, and because obviously, there are only two options. Yay gender roles! I can’t say that I’ve ever actually been asked this, but I know plenty of queer couples — of all genders — who have.

Also, neither of us is the man. That's kinda the point.

Ohmigod, how did you know that's exactly what we were hoping for? No, but seriously my girlfriend and I do not want to have sex with you. If I had a dollar for every time someone asked or implied this, I wouldn't have to worry about grad school funding. An extra dollar for each person who pretended it was a joke after saying this, and I could pay off my undergrad debt. Be a grown-up and stop harassing queer folk.

5. "But Have You Ever Actually Been With A Man/Woman?"

By which they usually mean - have you ever been with someone with different genitals than you have? Personally, my favorite way to answer this is to paraphrase Gia: “Yeah, once...and I could have done that with a German Shepard.” That's not really how I feel, since I'm into people with penises too, but it's always satisfying to see the look on some nosy jerk's face when I respond this way.

We actually have a term for this — gold star lesbian — though they’re pretty rare. It turns out that most women-loving-women have sex with at least one man in their lives, for various reasons, and plenty of gay men have gone to bed with a woman or two. Regardless, it’s none of your business, just like the rest of their sexual history isn’t.

Seriously, guys, humans can be attracted to more than one gender, even if they're only with one person at the moment. For some reason, people can’t grasp that our sexuality doesn’t change with our current partner. This kind of bi erasure happens all the time.

OK, so I’m one of those queer ladies who didn’t believe scissoring is a real thing, but apparently, some queer ladies are really into it. Either way, some queer lady couples scissor, some don't. There are plenty of other ways we like to have sex, thank you very much, but at the end of the day, what we do in our bedroom is really none of your business (are you sensing a theme here?). This applies to "do you use strap-ons?" too.

Culturally, we are so stuck on this idea that sex = penis-in-vagina that some people seem to honestly think lesbians can't have "real" sex without a penis or penis-substitute. All I can say to that is if the only sex you think is "real" is PiV, you lack some serious imagination.

But really, this is the bottom line...

9. Anything You Wouldn't Say To A Straight Couple

Seriously though. If you would never even consider saying it to a straight couple, it’s not appropriate to say to a queer couple.