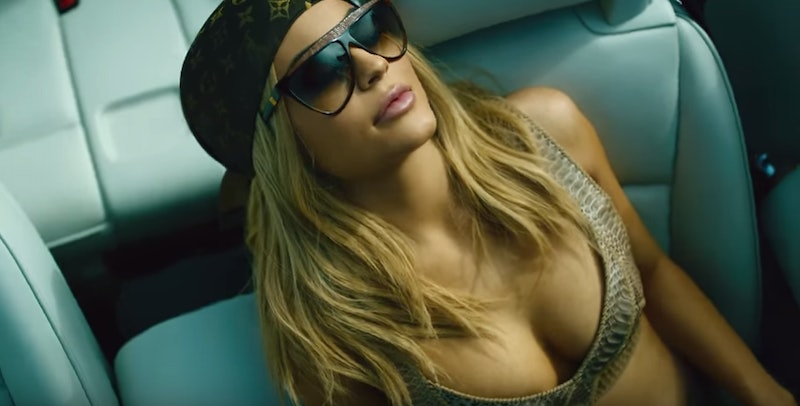 If you've been keeping up with the madness that has been the Kylie Lip Kits lately, you know that the starlet has launched a brand new shade, Kourt K, sold out of her latest restock in minutes, and officially broke the internet all in one week — but she is not stopping there. Kylie Jenner just launched a music video, titled Glosses, in what is definitely her most creative venture yet. Jenner announced her band new project with an Instagram post of a short clip from the video with the caption, "GLOSSES VIDEO OUT NOW! Link in bio," which immediately had me wondering — what does the Glosses by Kylie Jenner music video mean?

Kylie has been dropping major hints for days that all lead up to this three minute clip she released today. After being spotted on set of a secret video shoot and posting a cryptic Instagram photo that looks like a mugshot, everything is finally starting to make sense.

The video opens with Jenner driving up to a motel in a Rolls Royce adorned with a signature "KNGKYLIE" license plate. Sporting blonde locks, a Louis Vuitton bandana, and a skimpy snakeskin ensemble, she applies some type of nude-colored lippie that looks very similar to ones in her previous Lip Kits.

The focus then shifts to another woman who slips a Kylie embossed tube out of one of Jenner's signature drip style boxes. When she applies the product, though, it looks super shiny rather than matte.

Is Kylie trying to tell us that she'll be launching lip glosses?! It sure seems so.

The video concludes with the word "Glosses" written in huge letters, followed by the date 4/1. I think it's pretty safe to assume that Jenner is officially expanding her Lip Kit empire to include glosses.

Check out the full video below to see for yourself

I'll be counting down the minutes to see if she really does launch these glossy lippies on Friday!