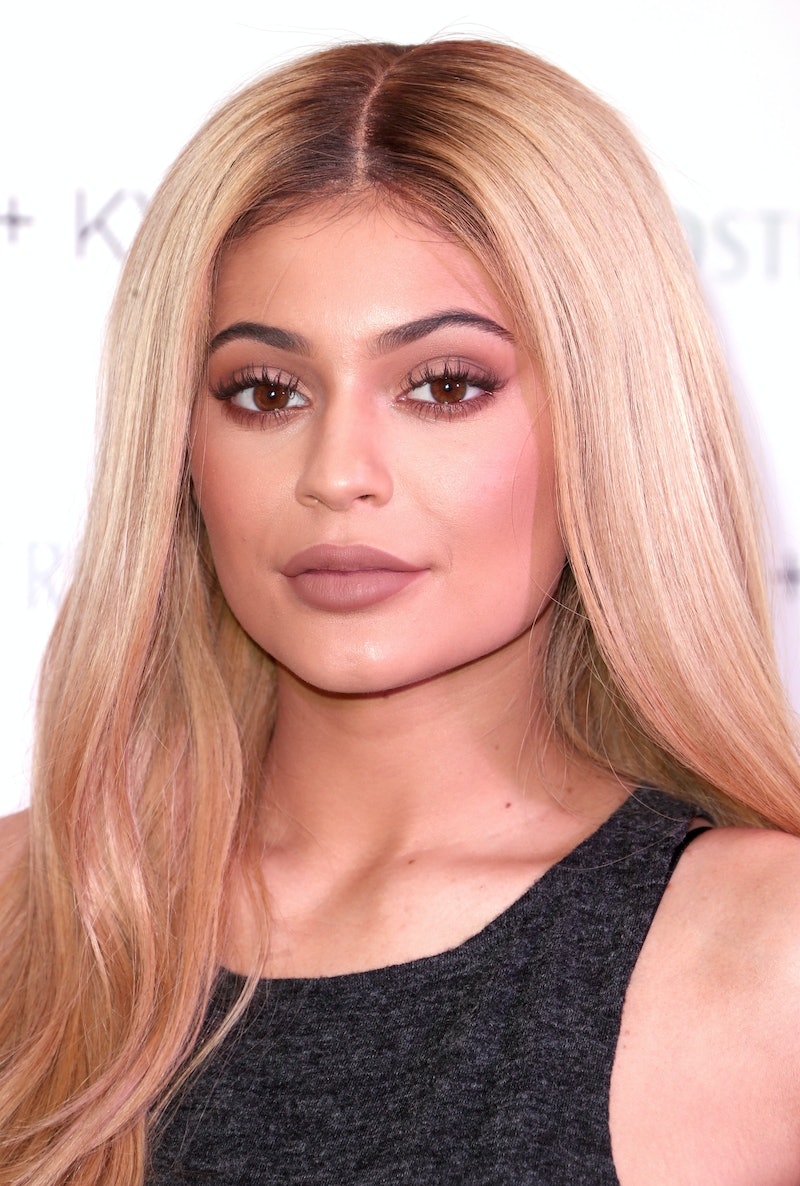 If you haven't yet recovered from the mass hysteria of the Kylie Lip Kit restock and launch of Kourt K on Monday, then brace yourself because the youngest Jenner has destroyed the Internet once again. In a post on her Instagram, the star made everyone ask is Kylie Jenner's new Lip Kit nude pink? The photo was insanely cryptic — not that such a post isn't common for Jenner —so there's really no way to know. (Plus, let's be honest — two days from now it's April Fool's day.) For now, I've got a hypothesis that Jenner is not only debuting a nude pink Lip Kit with a glossy finish, but that's she's doing so during the release of her music video for Kylie Cosmetics.

This definitely is not the first time that Jenner has made waves with her cosmetics on social media. Actually, she's been garnering oodles of attention since the launch of her initial three Kylie Lip Kit Shades. With each subsequent restock of a new shade, her Internet impact has only grown. That was definitely evident when she broke her own website on Monday during the restock of the kits. Now, it seems as though she just may actually break the Internet a la big sister Kim Kardashian thanks to Wednesday night's cryptic Instagram post.

Clearly, the public wasn't meant to understand the exact meaning behind the image, but there are some definite clues as to what it may mean for both Kylie Jenner fans and for the fans of Kylie Cosmetics and the Lip Kits.

On Tuesday, Jenner was spotted with beau Tyga reportedly filming a music video for the Lip Kits. In the photos, she's seen rocking a snakeskin bralette, and in her Instagram post from Wednesday, she's rocking what seems to be the same one. That means that Kylie was not only filming the video but potentially rocking this new pink nude lip color during it.

Another hint at this being a nude pink? The signature swatch in background. All of Jenner's lip kits feature a smear of the product on the packaging, and in Jenner's post, you can easily see the nude product smeared on the wall. Plus, based on the color on the wall, it seems as though Jenner is rocking the lip herself, and hello, glossy! Do I spy a new product alert? A gloss?

The final clue that the Kylie's new Lip Kit is nude pink? The fact that of the Kardashian sisters, Kim Kardashian is the last of the three without a kit named after her. With KoKo K and Kourtney K, the only remaining Kardashian is Kim. While both Khloe Kardashian and Kourtney Kardashian change up their makeup looks, Kim K. has always been a fan of a nude gloss. Could this the Kimmy K we've all been waiting for? I think maybe.

While there's legitimately no telling what Kylie Jenner has planned based on this post, a new Lip Kit in nude pink is at the top of my guesses.

More like this
Kylie Jenner's Silver Eyeshadow Is *So* Y2K
By Olivia Rose Ferreiro
42 Black Owned Fashion & Beauty Brands To Support Today & Always
By Mekita Rivas, Shea Simmons, Kui Mwai and Dominique Norman
Most Comfortable Underwear For Big Butts
By Audrey Williams
Rare Beauty's First Major Sale Is Here
By Olivia Rose Ferreiro
Get Even More From Bustle — Sign Up For The Newsletter