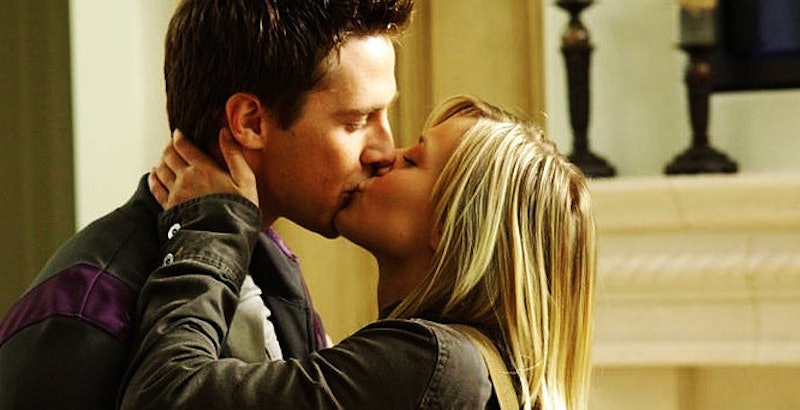 Throughout pop culture history, there are few relationships as (brace yourself for it) epic as the one between Veronica Mars and Logan Echolls. Former enemies turned lovers (on-again and off-again to the point where it hurts), the two bonded over their rage and, well, their constant battle of wits. I mean, Veronica's one-liners are impressive, but pair her with Logan, and you have some exchanges that go from romantic to hilarious seamlessly. So I thought we should take a moment to celebrate true LoVe by summing up their relationship ... in their own words.

We’ve put together a brilliant collection of Veronica and Logan exchanges that should make for a delightful walk down memory lane (ah, good old CW in the mid-2000s). You want snarky banter? It’s ready for you. You want bold confessions of love? I've got you covered, bro. Though we may have skimped a million other favorites (because let’s face it, quotability is their strength), these snippets hopefully get to the essence of the Veronica/Logan relationship. You know -- the passion, the humor, the drama, the suppressed lust, and everything in between.

So scroll down, children, and bask in the glory of LoVe.

1. When Even Through A Veil Of Sarcasm, Duncan Didn't Stand A Chance

Logan: Tell the truth, Veronica. Did you just sign up for newspaper so you could be near Duncan?

Veronica: No. I'm here so I can be closer to you.

Veronica delivers this with a girlish venom at the time, but it's retroactively ironic.

2. When They Made The Bold Transition From Enemies To ... Teenage Super Sleuth And Client

Veronica: I wasn't aware you were paying me.

Logan: This isn't a favor. It's a job, you know. I mean, we're not exchanging friendship bracelets.

Even though Logan's all business here, you can't argue that this was one small step toward a non-hostile relationship.

3. When They Worried About Keith Watching Their Makeout Sesh

Logan: He should feel lucky. I mean, you could be out here with some prettyboy jerk just looking to get laid.

Veronica: Wait, what are you saying? You aren't pretty?

Logan: What I'm trying to say is that I'm in love with you.

Veronica: The things guys'll say to get past second base.

It's cute, because underneath all of their almost-too-sharp dialogue, they're just a couple of teens with raging hormones.

Veronica: You didn't know what would happen.

It hurt all of us when we found out Logan inadvertently supplied the GHB used in Veronica's rape, but the two talk it out. It's comforting to hear how Neptune's perpetual bad boy has an actual eye on redemption.

Veronica: No jokes. No innuendos. No quips. Don't even think of alluding to having seen me naked or having touched any part of my body that does not have fingers.

Logan: Can I mention that my eyes adored you? I got it. No calling you 'bobcat,' no talk of milky thighs.

6. When They Mixed Flirtatiousness With Hostility

Logan: As a rule, I like to start every school day with a hot blonde waiting for me in the parking lot.

It's very evident that both of them needed some cooling down.

7. And When Wit Tangoed With Bitterness And Jealousy

Veronica: Remind me. Why did we break up?

Logan: Well, you thought the other guy had greener grass. Mm, or was it something about me being too much man? No wait, it was you. You were too much man.

8. When They Got Through The Uncomfortable Stuff

Logan: Ah, you have that 'I'd rather be making out with a broken bottle' look. Which, if history serves, means you're about to say something awkward.

Veronica: This? This is my 'I'd rather be spelunking' look. It's like you don't know me at all.

9. When They Contemplated The Unconventionality Of Their Relationship

Veronica: Do you think this thing ... will ever get more normal?

Logan: What? Like, will we ever hang out at the mall, or hold hands and buy each other teddy bears with little hearts that say 'I wuv you beary much'?

Veronica: Yes. Exactly that. Except I want my bear won through some sort of demonstration of ring-tossing ability.

Incidentally, I would pay good money if they fit a scene like this into the movie sequel.

10. When Nobody Else Even Came Close To Veronica

Veronica: Your room key? What if I drop in unexpectedly? The other girls will have to ...

Logan: Stop it. You know there's no one else. I only want you. You ought to know that by now ... What, and no quip?

The "no quip" comment keeps this from getting too saccharine, but for longtime LoVe shippers who had waited for the two to really embark on a true relationship, this Season 3 exchange was a lot of sugary goodness.

11. When They Argued Over Logan Hiring Someone To Keep Veronica Safe

Veronica: That's all sweet and great, but it doesn't really work that way. It's not like this is all some new facet of my personality. You know who I am. You know what I do.

Logan: And you know who I am. And you're constantly expecting me to change. And even right now as you're thinking, "Crap, he's got a point," you still think you're ultimately right. I love you Veronica. I love you. Do you love me?

12. When Logan Found The Perfect Word To Describe Their Love

Logan: I thought our story was epic, you know, you and me.

And from that point forward, all LoVe shippers would refer to their relationship as nothing less than that.

13. But Then Veronica Tries To Counter With Reality

Veronica: Come on. Ruined lives? Bloodshed? You really think a relationship should be that hard?

Logan: No one writes songs about the ones that come easy.

Nobody writes fanfiction about the ones that come easy, either. Now if you'll excuse me, I have a date with Microsoft Word and my two favorite snark machines.