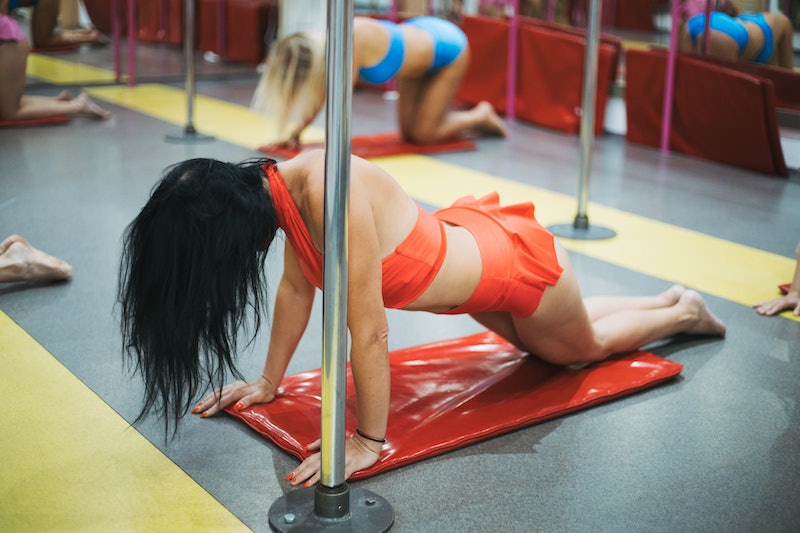 One way or another, strippers and other adult entertainers often turn up in the news cycle. Celebrities are caught spending their fortunes on call girls; corporate scandals center around lap dances purchased by executives with company funds; cities and towns seek to clean up their images by banishing strip clubs to outside the city limits.

I worked as a stripper while I was writing my PhD dissertation in Dance Studies, much to the surprise of anyone who knew me — as well as my own. I had performed as a modern dancer for years, and constantly searched for ways to earn more than I was making by teaching Pilates and leading workshops at a public middle school. I scoured the job ads and often saw postings for dancers; but upon further examination, these always turned out to be for exotic dancing, something I had never considered.

But one Sunday there was a different kind of ad, offering exotic dance instruction. I figured I had nothing to lose — the lessons were cheap, and a convenient distraction from my looming dissertation — and soon afterwards I found myself in a side room of Backstage Bill’s, one of the city’s oldest and seediest strip clubs, flailing around under the disappointed gaze of my tutor.

My teacher had her work cut out for her, but with practice I figured out how to climb out of hot pants without tripping myself, and soon I got a job at Backstage Bill’s. Stripping sent me on a decade-long journey of dancing, watching, and writing that culminated with my first book, The Naked Result: How Exotic Dance Became Big Business , which has just been released. I started out with the same ideas about strippers you probably have yourself. But after years spent talking to dancers, customers, and managers, not to mention dancing myself, I’ve learned that almost everything we think we know about stripping is a lie.

You’ve seen strippers in movies and television shows —usually they're depicted as degraded, down on their luck, stuck in an abusive relationship, and just possibly in possession of a heart of gold. The stereotypes about sex workers and strippers are entrenched in our culture, and they can make it hard to see the reality behind images of thigh-high boots and fishnet stockings. So here are some fun facts about strippers you won’t find at the Bada-Bing:

Myth #1: You Have Never Met A Stripper

Fact: You Probably Already Know One

My research suggested that more women are employed in the exotic dance industry than in all other dance forms combined. Lots of women from lots of different backgrounds strip at some point in their lives. Every time I speak about striptease at academic conferences, at least one professor comes up to me to confess that she was once a stripper, too.

During my brief career as an exotic dancer, I worked with women from all walks of life. Heather* had a masters degree in education, but had decided on stripping largely for the hours; she and her husband wanted to keep their toddler at home, rather than sending her to day care, and that meant one of them had to work at night. During the day, Heather took her daughter to play-dates and mommy-and-me music classes, and read up on the educational philosophy of Rudolf Steiner. Summer was a bouncy blond who had a degree in psychology from UCLA (she had also run her own S&M dungeon in Beverly Hills, but that’s a story for another day). Like a number of other dancers, Summer lived in the Days Inn near the club, because while she could easily come up with $60 a night, she found it hard to save up enough for a security deposit and first month’s rent. Jenny danced to pay for law school, and had hopes to one day work for the ACLU.

Few women in the public eye have come out as strippers, but you can bet that there are many celebrities other than Margaret Cho and Amber Rose who have put in some time on the pole — and I’m betting so have some of the totally respectable, independent, awesome women in your own life.

Myth #2: Stripping Is Either Totally Degrading Or Totally Empowering

Are you a woman? Do you work in a workplace or in your home? Then chances are, you’ve felt degraded or discriminated against at some point. Being discriminated against or mistreated because you're a woman happens in all industries and professions. Personally, I experienced much more abuse and sexism as a graduate student than I did when I was stripping.

However, that’s not to say that stripping is all about getting your groove on and asserting your sexual power. Lots of jobs, especially traditionally female ones, involve what is called "emotional labor" — think caring for children or elderly adults, catering to the demands of frustrated air-travel passengers, or serving up a sympathetic ear with each round of cocktails. Stripping is no different, except that instead of overpriced Manhattans, you’re offering clients a performance of your sexiest, most compassionate self. Like any job that requires physical and emotional expression, stripping can be depressing and oppressive and fulfilling and exhilarating, often all on the same night.

Myth #3: All Strippers Have Sex For Money

There are a lot of different aspects of the sex industry, and I believe there shouldn’t be a hierarchy among sex workers. But through my own experience and research, I found that the vast majority of strippers don’t work as prostitutes — so don’t assume that the stripper giving lap dances in the club will offer additional services in the parking lot.

Myth #4: There Are No Costs Associated With Working As A Stripper

The exotic dance industry considers strippers independent contractors, which means that instead of clubs paying dancers, dancers actually pay the club to work there. Each time she comes to work, a dancer has to pay a $80-$150 “house fee” to the club, as well as “tips” for DJs, house-moms, and other support staff. Sometimes, you end up in the hole at the end of the night, paying out more in tips than you brought in. On my worst night, I brought home just $11 after an eight-hour shift in six-inch heels.

Fact: Many Strippers Are Labor Activists

Clubs micromanage every aspect of a stripper's labor, from what they wear to when they work to how they speak to customers. One dancer contract I found for a particular mega-chain strip club was 80 PAGES LONG, and specified how much weight dancers could gain (Answer? Not much) and how many times they should say a customer’s name in the first three minutes of an interaction.

With this kind of control on their work, federal labor law indicates that strippers should be treated as employees, rather than independent contractors, and thus entitled to minimum wage, unemployment insurance, etc. Dancers have brought class action suits against a number of chain clubs, asserting their rights as employees. Many dancers are against this idea, however, fearing that clubs would exploit them further and that they would lose earning capacity. One dancer on StripperWeb summed it up like this: “Is the redefinition of a 'stripper' from contractor to employee necessarily beneficial for strippers? I don't know. Have the clubs been huge DICKS by misclassifying strippers into some purgatory-esque-limbo-land of ‘independent contractors who basically have to act as though they are employees’ and reaping the financial benefits of this deliberately grey area? Fuck yes.”

Fact: Strip Clubs Are About Fantasy, Not About Sex

I know, a lot of fantasies are about sex. But most of the time, men who go to strip clubs have other kinds of fantasies too, usually involving emotional rather than physical intimacy. In my experience (and according to studies like Katherine Frank's book G-Strings and Sympathy ), lots of guys go to strip clubs to feel heard and seen; some go to show off for their friends; some go to see women other than their girlfriends or wives get naked. I had one regular who paid me $100 to listen to him talk about his marital problems for a few minutes, week after week. Strippers often end up being more like therapists than anything else — just with less clothing on.

Because it’s about fantasy, stripping also means acting. Strippers do what Arlie Hochschild calls “surface” and “deep” acting—surface acting is when you’re pretending just to the client; deep acting is when you’re also pretending to yourself. Strippers make customers feel as though they share something intimate and special, and sometimes they can make themselves feel that way, too. Of course, there are times when it’s all about the hustle, but I also observed and participated in relationships in which both dancer and customer created a fantasy of human connection.

Myth #7: Strippers Are Looking To Hook Up With Customers

Fact: Your Boyfriend Isn’t Going To Get With A Stripper If He Goes To A Strip Club

There are two big reasons for this. One is that strip clubs aren’t about reality (see previous myth). Your boyfriend doesn’t want to actually be with a stripper; he wants to engage in some make-believe and then take that excitement home to you.

The other reason he's not going to hook up with a woman working at a strip club? As awesome as your boyfriend is, the stripper doesn’t want to be with him, either. Her job is to make him feel good about himself, but once her shift is over, she wants to go home to her own partner, not yours.

Myth #8: Strip Clubs Aren't Owned By People Who Know Anything About Business

Usually you think of a strip club as a seedy joint in dark alley, full of the dregs of society. But these days, most strip clubs are owned by large corporations, and are managed more like a casino than a biker bar. Eric Langan, the CEO of Rick’s Cabaret (which recently restructured and changed its name to Rick’s Hospitality Holdings LLC) was quoted in a 2005 issue of Equities Magazine as saying, “Twenty years ago, most of the clubs were independently owned, mom-and-pop operations. Our consolidation model is very similar to what I see happening in the casinos, in that about 10 years ago, most of the big club operators had two or three clubs. Today, there are several operators that have anywhere from 10 to 25 clubs, and the largest operator has around 85.”

Myth #9: The Strip Club Industry Has No Connection To The Rest Of The World

Fact: Strippers Can Tell You A Lot About The World We Live In