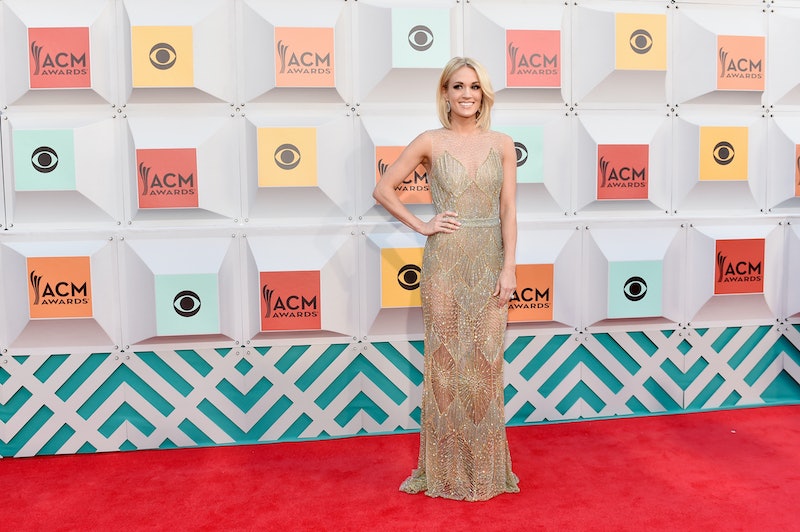 Though she missed the red carpet for this event last year, Carrie Underwood at the 2016 Academy Of Country Music Awards showed up ready to take first place in a glittering, gold gown. Nominated for just one award at this year's ceremony — Female Vocalist Of The Year — Underwood was still one of the most highly-anticipated guests on this year's red carpet.

She's up against some stiff competition for that award, including Miranda Lambert and Kacey Musgraves, but it's Underwood's 11th consecutive nomination for Female Vocalist Of The Year from the ACM. She'll also be performing a new single at this year's ceremony, "Church Bells." This year also marks Underwood's return to the ACMs after she missed it in 2015 because she gave birth to her son right before the ceremony.

Despite all of the moving parts and excitement of this year's event, the singer knows how to handle the heat. She did win American Idol, after all. (Can we also reflect on the fact that it's been nearly 11 years since she cinched that title, because, honestly, it feels like it was yesterday.) Over the years, Underwood has proven over and over again that she's got the voice of an angel — not to mention that she knows how to dress like one, too. Especially in this ethereal gold, beaded gown with cream-colored buttons up the back. The gown is slightly sheer, giving it an almost 1920s vibe.

Underwood accessorized simply with her now-classic blonde lob, a basic smoky eye with a nude lip, and some teardrop, diamond earrings, making the choice to let that dress shine.

This could be a big year for Underwood at the ACM Awards, but with this golden, beaded gown, she's already won top prize.