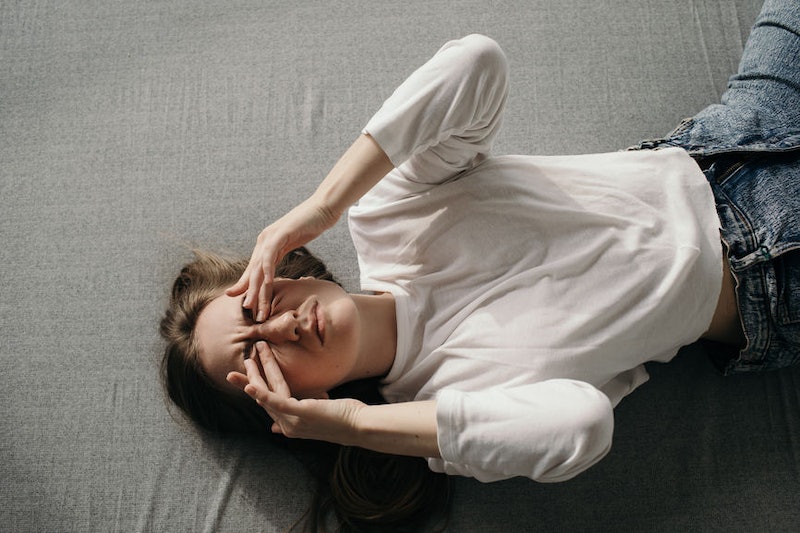 We've all been there — that awful moment when the alarm goes off and it's time to wake up, but you never really fell asleep. When that's the case, get ready for a day of bleary eyes, fuzzy thinking, and bad moods. Because, let's be honest, some pretty weird things can happen when you don't get enough sleep.

Anyone who's ever experienced the delirium that is sleep deprivation knows exactly what I'm talking about. It's not the best feeling in the world, but it can be pretty funny. That's why we have turned lack of sleep into a joke, and sometimes even into a bit of a contest.

However funny it is to watch a friend nod off at work, or complain all day about needing a coffee IV, sleep deprivation really shouldn't be a laughing matter. In fact, it can do quite a bit of damage to your health. According to WebMD, if you don't get the recommended eight hours a night, it's possible to be at risk for all sorts of scary things like diabetes, heart disease, and even depression. Definitely not worth all the all-nighters, or the jokes.

So, besides yawning and downing espressos, what are the signs of sleep deprivation? Here are some of the stranger (and OK, sometimes slightly funny) things to look out for.

1. You Are An Accident Waiting To Happen

Whenever I'm tired, my life turns into a comic display of klutzy mishaps. I spill my coffee, drop my laptop, and inevitably knock over my bowl of cereal. It feels like my body isn't listening to my brain's commands, and I spend the whole day tripping, bumping into things, and just generally embarrassing myself.

Researchers aren't sure why it happens, but it's true — tired people truly can't function. According to the Huffington Post article, "Reflexes are dulled, balance and depth perception can be a little wonky and since you may also have trouble focusing, reaction time can be slowed, meaning you can't quite catch the egg carton before it hits the floor."

2. Everyone Is Making You Mad

A lack of sleep has a way of making the world seem like a way more annoying place than it actually is. And when that happens, you might find yourself walking around feeling cranky AF. It's no way to be, for you or anyone who has to hang out with you.

But it's not our fault. Sleep deprivation has a way of affecting the mood in ways that are less than pleasant. In fact, this was shown in a recent study at the University of Pennsylvania. According to Meghan Rabbitt on Prevention, "... researchers found that people who got only 4.5 hours of sleep a night for one week reported feeling more stressed, angry, and sad than when they snagged more shut-eye. The good news? Their moodiness improved dramatically when they resumed their normal sleep." Good news, indeed.

3. Your Eyes Have Stopped Working

If you've been considering getting your eyes checked, first think about how much sleep you've getting. If you recently pulled an all-nighter, you could have a classic case of eye strain, which causes blurry vision and sensitivity. It's really no big deal, and usually wears off after a few cups of coffee (or a nap).

But that blurry vision can start to stick around if you go night after night with no sleep, and no amount of coffee will be able to fix it. That's because fatigue affects the muscles of the eye, according to Rachel Swalin on Health. Specifically, the muscle that helps the eyes focus. (Cue blurry vision when you try to read something up close.)

It can also affect the ocular muscle, which is the one that allows the eyes to swirl in the sockets. In non-scientific terms, when the eyes don't swirl at the same time due to fatigue, you can run the risk of double vision. According to Swalin, "You might notice both of these vision problems after one night of poor sleep, but they will persist the less time you spend in bed." It's a good excuse to go take a nap right now.

4. You And The Fridge Have Become BFF

Snacks are good any old day of the week, whether you're tired or not. But if you've been feeling extra ravenous lately, it could be your brain telling you to get more sleep. That's because, when the brain isn't getting the energy it needs from sleep, it will often try to get it from food.

"Running low on rest can increase the production of ghrelin, also known as the hunger hormone, in your gut. Too much ghrelin makes your body crave fatty and sugary foods ... Poor sleep can also mess with leptin, the satiety hormone," Swalin noted. This could really explain your bottomless-pit tendencies when it comes to ice cream, donuts, and all things delicious.

5. You Look A Little Worse For Wear

Everyone knows what exhaustion looks like. And it's not just when we shuffle around in sweatpants yawning and making coffee jokes. Turns out, there's an actual sleep deprived look that can give us all away. And, it can be create a rather shocking reflection to wake up to in the morning.

According to Louisa Kamps on Real Simple, "Red, puffy eyes, dark under-eye circles, and turned-down corners of the mouth were all readily identified in sleep-deprived people participating in a recent Stockholm University study." If this describes you, get yourself to bed ASAP.

6. You Always Feel Under The Weather

Lack of sleep has a way of suppressing the immune system, as evidenced by that cold you inevitably get after pulling a few all-nighters. This connection was shown in a 2009 study, which found that people who sleep fewer than seven hours each night have almost three times the risk of catching a cold than people who slept for at least eight hours, according to an article on HuffingtonPost.com. So do yourself a favor and sleep in.

7. You Can't Make A Decision To Save Your Life

If you aren't getting enough sleep, expect life to become just that much more difficult — especially when it comes to making decisions. (This is horrible news for people like me, who struggle to make even the most mundane of decisions.)

Again, this type of mental lethargy can be attributed to lack of sleep. And it was recently tested in a 2009 study published in Sleep. According to Swalin, "... researchers asked both sleep-deprived and well-rested volunteers to perform a set of tasks that required quick decision-making two times. Between testing, the accuracy of those without quality sleep went down by 2.4 percent, while the rested group improved accuracy by 4.3 percent. All in all, poor sleep simply hinders your ability to react quickly."

Sleep deprivation can come in many forms. If any of these sound familiar, get yourself some better sleep hygiene, and go to bed now.