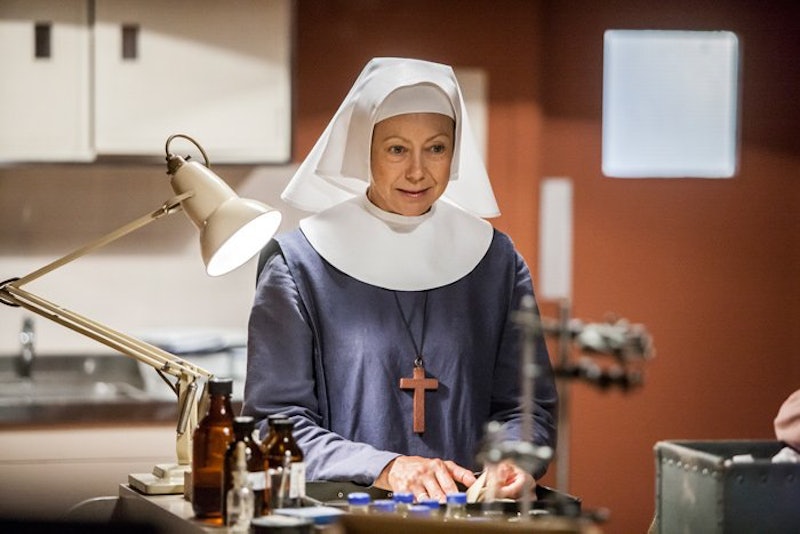 There is precious little room for characters of faith on contemporary television. All too often characters with a strong spiritual belief system are mocked or seen as dangerous or naive. Call the Midwife is one of the few shows that allow characters of faith to not only be respected, but to take center stage with their complex lives and stories. Perhaps the most devout character of them all is Jenny Agutter's Sister Julienne.

For five seasons now, Sister Julienne has been a pinnacle of strength for the nuns and midwives of Nonnatus House. Her faith never waivers, which is something her portrayer, Agutter, cannot always understand. "It's actually one of the harder roles for me to play," Agutter tells Bustle. "I do understand the nature of a person like that. I was brought up Catholic myself and find that I know a great deal about religion. I don't really understand about faith, and that is the difference between us. It is quite hard to understand something that is so fundamental to somebody."

Viewers watching Agutter's work would never know the actress did not share her character's faith. Agutter, who has so often taken on roles in action and horror films like An American Werewolf in London, Logan's Run, and The Avengers — "It's such fun to take the habit off and kick ass," she says — is much worldlier and open than Sister Julienne. However, consummate actor that she is, Agutter had several strong women to look to for inspiration for the role, including the real life Sister Julienne, who author Jennifer Worth wrote about in her memoir that inspired Call the Midwife.

A chance encounter during Season 1 led Agutter to correspond with the niece of the real Sister Julienne who turned out to be a meticulous record keeper. "She was fastidious in her notes about her aunt," Agutter says. "She wrote me all these notes about the way she was and the way she behaved and her mannerisms, and all these little things about her. It's quite nice working from the outside in from people. She said she [her aunt] would look at people very intently and listen very carefully, and just sort of give these little short intakes of breath as she listened. Funny little things that just gave me an indication of what she was like."

Agutter also reached out to a nun who cared for her sick mother for several years when she first received the role. Her goal was to try and understand how nuns cope with hardships, and while Agutter expected a profound answer, she received a wonderfully witty one instead. "I remember when I knew I was doing the series I went and met her and talked to her. I asked her how do you deal with things when they are really, really difficult, what do you do? I thought she would give me a real piece of wisdom and insight into how nun's minds work, and she said, 'Oh, I just get on with the next thing!'" Agutter says.

These two women have informed how Agutter sees Sister Julienne in so many ways, but she also has a resource closer to home who is quick to tell Agutter what the show gets right and wrong about the era. Her own aunt was a World War II era midwife who later went to Africa to set up midwifery units, and once proceeded with delivering a baby even after the entire bed, mother and all, fell through the floor of a bombed out building after the war. "She's a very quick person to go to and ask is this right, did they really do this?" Agutter says. "She's seen the show so I get good reports from her."

Of course, the best way to know a character is by understanding who she is at her core, and Agutter has a keen understanding of Sister Julienne. Her character who is so unassuming for much of the series was given a backstory of her own in Season 4. The reveal that Sister Julienne had chosen her faith over love was a pivotal moment for Agutter.

"What one didn't see any longer was someone who had failed in her life and turned to the religious order and this work because she needed to do that," Agutter says. "The need was always there. There was a real depth to the relationship and closeness, but she really knew she had a calling. For me that meant a great deal, and it meant a great deal to be able to express that and to find that."

Indeed, Agutter has brought to life a character unlike any other on television. Sister Julienne is strong in her faith and in her spirit. The proverbial iron fist in a silk glove. Agutter does not share her character's faith, but she does share her beautiful humanity. "What I do understand is her absolute enjoyment of people, her absolute desire to serve," she says.

With Season 5 airing stateside on PBS beginning Sunday, April 3, fans can look forward to watching Sister Julienne continue to lead her sisters and midwives into the '60s thanks to the graceful and immense talent of Agutter.

More like this
Twitter Is Identifying With Sally Field & Jane Fonda’s Friendship In New Viral Video
By Jake Viswanath
Netflix Shut Down 'Bridgerton' S3 Rumours About A “Very Dark” Storyline
By Bustle
Linda Ronstadt’s “Long Long Time” Plays A Pivotal Role In The Last Of Us
By Brad Witter
Taylor Swift Visited The 'Glee' Set For This Bizarre Season 5 Episode
By Grace Wehniainen
Get Even More From Bustle — Sign Up For The Newsletter
From hair trends to relationship advice, our daily newsletter has everything you need to sound like a person who’s on TikTok, even if you aren’t.