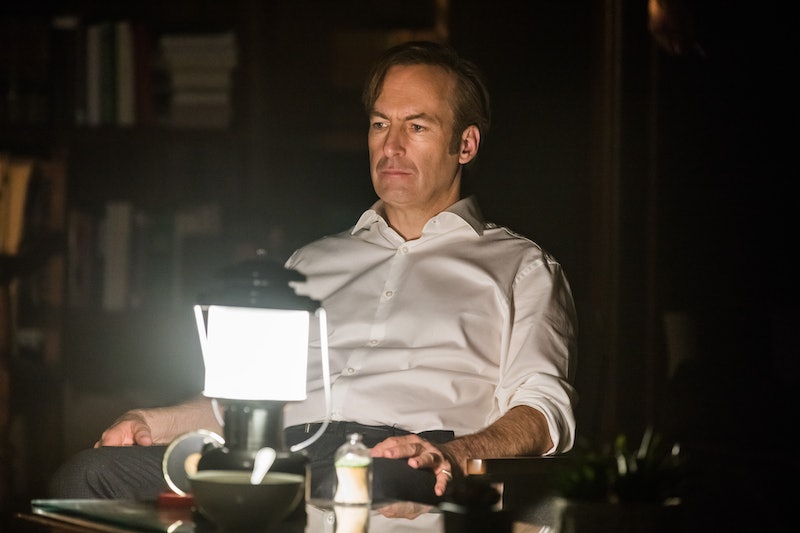 Earlier this year, battle lines were drawn between brother and brother as Season 2 of AMC's Better Call Saul has pitted protagonist Jimmy McGill against his condescending older brother, Chuck. But ever since that conflict was established in the season's second episode, it has sort of taken a back-burner to other plots like Mike Ehrmantraut's tangles with the Salamanca family and Kim Wexler's meteoric rise from underappreciated HHM employee to determined solo practitioner. But this Monday's episode, "Fifi," reintroduced the long-simmering cold war that is McGill versus McGill as Chuck deliberately sabotaged Jimmy's efforts to start his own firm.

As soon as he got word from Howard that Kim was leaving HHM and taking the Mesa Verde account with her, Chuck went into overdrive trying to put a stop to it. As the firm's expert in compliance law, he knew he needed to personally take a meeting with the Mesa Verde representatives in order to convince them to stay — and he also knew it wouldn't be very convincing if the showed up to a darkened conference room in a tinfoil space suit and asked them to turn in their cell phones at the door. But so determined was Chuck to thwart Jimmy's plans that he suffered through his electromagnetic hypersensitivity in order to make a good impression.

Although at first it seemed like Chuck was talking the Mesa Verde reps into going with Kim over HHM, it soon became clear that he was actually using a particularly savvy bit of reverse psychology that — coupled with some truly expert humblebragging — resulted in the bankers changing their minds and sticking with HHM, thus torpedoing Jimmy's and Kim's new firms before they even got off the ground. (Of course, the pair is still going through with their plans; there's just the small detail that they now have a grand total of zero clients.)

But Jimmy wasn't about to take this setback lying down. While Chuck was comatose recuperating from his un-shielded exposure to the sun, Jimmy took the opportunity to "borrow" all of his brother's Mesa Verde files, take them to a local copier, and… transpose two of the numbers in the address on every letter/form/memo? It's unclear exactly why Jimmy is doing this and the storyline isn't resolved within the confines of this episode, so we'll have to wait to see what his endgame is here. But Mesa Verde is undergoing an expansion, so presumably altering the address of their new location would wreak havoc on the process and possibly make HHM look bad enough to make the bank switch firms?

So far, both Jimmy and Chuck are being fairly underhanded in their efforts against each other; their cold war has not yet officially broken out into a hot one. But given the way resentments are just continuing to build between the two McGill brothers, it can't be long until it does. And then brave yourselves for World War III.