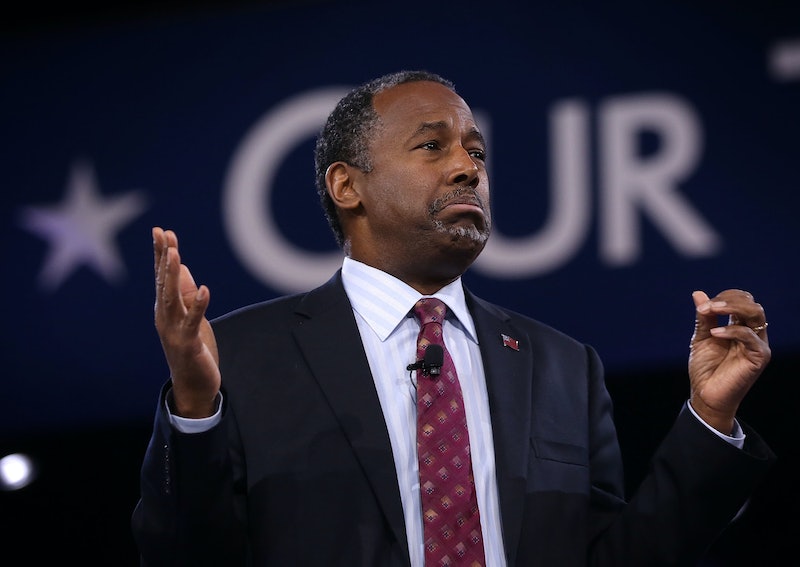 Ben Carson is campaigning for Donald Trump, and it’s not clear that this is good for Donald Trump. On Sunday, Carson said that the real estate tycoon has “major defects” but is “probably” the best candidate to restore American greatness. That’s not exactly a ringing endorsement, but the comments aren’t surprising, either. As he’s made very clear since endorsing Trump, Ben Carson is a terrible campaign surrogate, and perhaps the worst surrogate ever.

It started as soon as he endorsed Trump in mid-March. At a joint press conference, Carson said that “there are two different Donald Trumps ... There's the one you see on the stage and there's the one who is very cerebral, sits there and considers things very carefully.”

Trump — perhaps aware that being two-faced isn’t an appealing quality for a candidate — rejected Carson’s assertion, saying that “I don’t think there are two Donald Trumps.”

A rocky start, and things only got worse from there. Three days after his endorsement, Carson said that “even if Donald Trump turns out to be not such a great president,” it won’t be a huge deal, because “we’re only looking at four years” of a Trump administration. Because, hey, what’s the worst that could happen in four years?

Thanks to Carson’s “support,” Trump also has an ethics complaint against him pending with the Justice Department. In an interview, the retired neurosurgeon made comments that could be interpreted to mean Trump promised him a spot in his administration in exchange for his endorsement. This would be illegal, and a Democratic-aligned watchdog group filed a complaint with the DOJ in response.

The hits just keep on coming. When Trump garnered near-universal criticism for suggesting that abortion should be illegal and women who seek the operation should be punished, Carson’s feeble attempt at damage control only made matters worse.

“I don’t believe that [Trump] was warned that that question was coming,” he explained, “and I don’t think he really had a chance to really think about it.”

Exit polls have consistently shown that despite his popularity, Trump does not do well with late-deciding voters. He’s having a hard time expanding his coalition beyond the true believers who’ve been with him from day one. If there is indeed a hard ceiling on Trump’s support, it will be very difficult for him to win a general election, given the astronomical share of Americans who already dislike him.

Cumulatively, Carson’s bumbling reinforces this perception. It gives the impression that his support for Trump is lukewarm at best and purely transactional at worst. After all, if Trump can’t even win over the heart of a conservative Republican who might have a job waiting for him in the Trump administration, how can he win over the 63 percent of Americans who already have a negative opinion of him? There’s a good chance that he cannot.