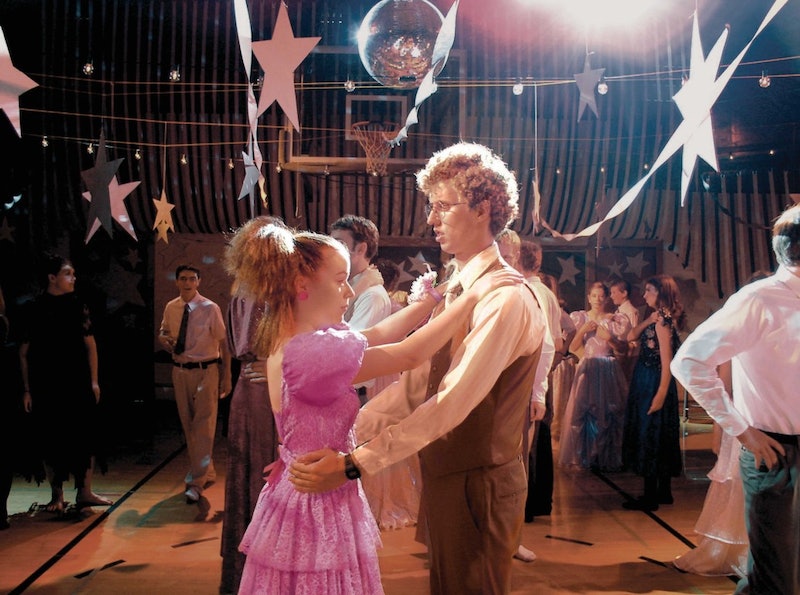 Back in the day, one of my very best friends was content with the idea of going to prom by herself — after all, her friends would be there no matter what, and she's the type of person who has self-confidence that would fill up an entire dance floor. Unfortunately, there's a thing called table pictures, and her friends weren't fond of the idea of her going to prom without a date (something about the picture looking uneven, which still ticks me off to this day) so they hooked her up with an absolute stranger. For the sake of a photo. Chew on that for a moment or two.

My friend now had to spend the night entertaining her date, who — while he was definitely a nice and attractive gentleman — knew absolutely nobody else at the prom. While she didn't have a bad time, it's still a bummer that her totally reasonable, admirable plan for her own prom was dashed by the expectation of others. The aforementioned prom date wasn't in the social picture after the dance, which made it feel like he was solely a prom prop.

My friend had it right all along — there's no shame in attending the prom by yourself, and in fact, your experience might be heightened if you don't have to worry about whether or not your date is having an equally fun time. The prom is what you make of it, and you should stand by your guard and insist on making it a fun night for you, no matter what others might think.

If you're wondering whether or not attending the prom solo is for you, here are a few ways to figure it out before you buy your tickets.

1. You're not sure if your date will enhance your experience.

If you feel like you're bringing a date because high school society states that you should bring a date, don't bring a date. There's nothing worse than feeling bogged down, or afraid to let loose and be yourself, since you're afraid of what your date might think. Prom is a time to celebrate your four years of high school, and if you think your date will prefer sitting around the table instead of getting out on the dance floor with you and your buddies, you probably won't have a ton of fun. Instead, you'll feel like you have to tend to your date. And if your date is someone you're not totally comfortable with in the first place, why should you spend a fun night babysitting him or her?

2. Dating kind of makes you uncomfortable.

That's totally OK, by the way. It's completely normal to not have gone out on a date in high school. If the idea of introducing someone to your parents (since, of course they want to take a ton of awkward pictures of the two of you) makes you break out in hives, skip the anxiety and just go solo. If you've got a bunch of friends, there's a good chance one of them will take you out on the dance floor for a slow dance anyway, so you won't be missing out.

3. You don't know much about the person you'll be asking.

It's just some dude in your journalism class that seemed kind of nice. You figure he might be dateless, and you're thinking about asking him, but all you truly know about him is that he's pretty good with sarcastic one-liners after your teacher admits there'll be a Monday morning pop quiz. You don't have butterflies when he's around, and you're not even sure if the two of you have mutual friends. While asking him would be sweet, think about whether or not you're ready to have a "getting to know you" session before the big night. There's also the possibility that you'll ask, he'll say yes, and then you'll figure out how totally incompatible the two of you are. Want to know what's way worse than going to a prom solo? Going to a prom with something you're really not into.

4. You envision goofing around with friends during prom, not slow dancing.

If you've ever slow danced before, and had the feeling of "will this song ever end?" you're probably not getting much out of it. Holding onto someone while dancing around in circles, hoping not to step on feet, isn't as romantic and magical as it seems in the movies. You're more of a group dance, arms-in-the-air kind of person. You like dancing fast with your closest friends, without any regard for technique. And yes, you can do this with or without a date — but if you want to goof around with friends, just picture your date in the sidelines awkwardly sipping on party punch. It's not fair to either of you.

5. Your other friends are going solo.

Usually doing things just because your friends are doing them is a bad idea. It's the whole "jumping off a bridge" motherly advice that has been seeped into your brain since childhood. But, prom is definitely an exception. If you're in a long relationship, ditching your guy for a night of singlehood probably isn't cool, but if you're unattached, and your friends are equally unattached, why bother trying to find a date?

6. You're iffy about prom in general.

Listen, you're not even sure if you're going to go to this thing. You never saw yourself as being someone super into prom, and your pro and con list over your attendance is pretty equally split. You'll probably end up going, but your heart totally isn't into it. And while that's OK, it's unfair to drag someone else into this. This is your indecision, and roping someone else into it is just kind of a bummer. So if you're the type of person who might snark on the event all night, you'll want to attend solo. It'll be easier for you in the long run, and you won't get the nickname of "Debbie Downer."