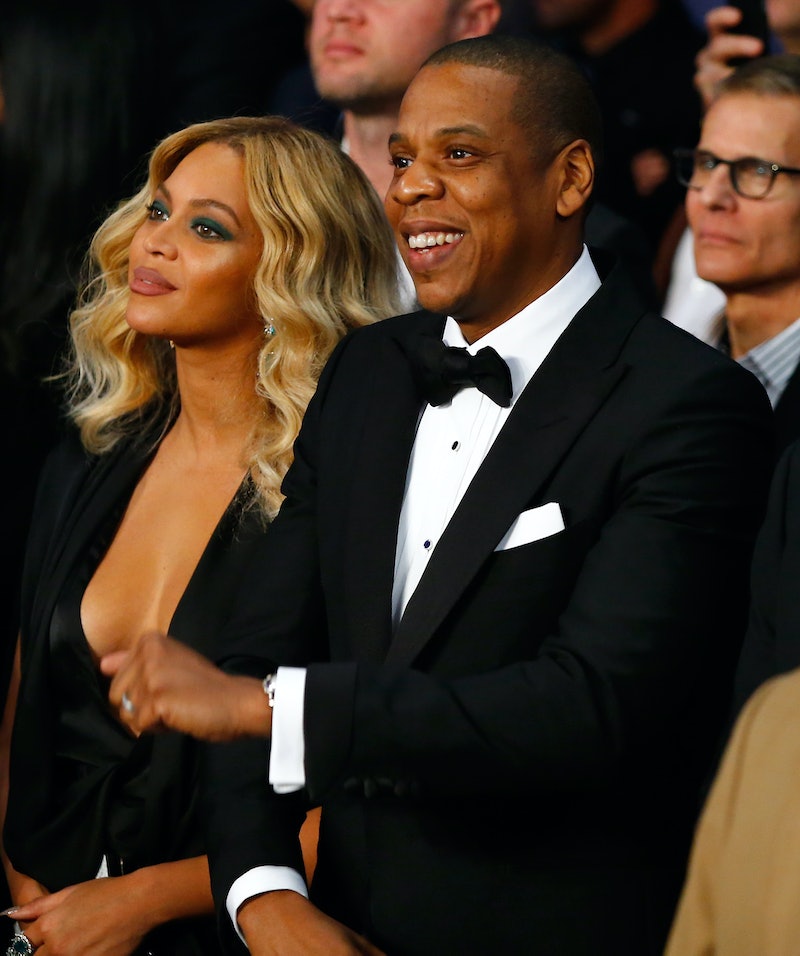 Sorry, Brangelina and Kimye. When I hear the phrase "power couple," I immediately think of Beyoncé and Jay Z. Unlike those previously listed pairs, they don't have a portmanteau — their individual names are each worthy of full recognition. (Unless you lovingly refer to them as Bey-Z, like I do on occasion.) On Monday, April 4, Beyoncé and Jay Z are celebrating their anniversary. The Carters have officially been married for eight years now. In that time, the world of pop culture has certainly changed for the better. In honor of this news, I've decided to dig into the archives and see what they were like in their early days.

Although the couple is a bit confused as to when exactly they met — they both have reportedly shared different timelines of when they were first introduced — it was in 2001 that they first began dating, according to what Jay Z told Vanity Fair in 2013. After that, the lovebirds appeared in several music videos together. Remember "Crazy In Love"? That was one of the best songs of 2003 and the lyrics speak for themselves.

But was the chemistry there all along? Let's time travel and see whether Beyonce and Jay Z were destined to be the power couple they are today — or if the romance built up as their relationship went on.

As mentioned, the rapper talked to Vanity Fair about the early days of their relationship. The magazine reported,

Jay says that when he and Beyoncé were both featured on the cover of Vanity Fair’s 2001 Music Issue “we were just beginning to try to date each other.” Try? “Well, you know, you’ve got to try first. You got to dazzle . . . wine and dine.”

However, based on this photo, you'd barely be able to tell. They're super far apart. Maybe all the chemistry happened behind-the-scenes.

Pure happiness is made of goofy waves and poses. It almost looks like she's pretending to be a moose here.

Right in the beginning, Jay asks, "You ready, B?" I don't know if she was actually ready for their relationship to blow up in the way it did — who could have predicted that?

Still, as they say in the song, "All I need in this life of sin is me and my girlfriend." As long as they have each other's backs, that's all that matters.

Have you ever seen two happier people? The recurring theme throughout these photos is that they can't stop smiling. Also, Bey's shirt here is pretty fantastic.

Between the smiles and laughs, I don't think I've ever seen a more crazy-in-love pair than Bey and Jay.

Admittedly, there's not nearly enough camera time of the two of them together in this video. They each sing their individual verses and it's not 'til halfway through that they're actually on-screen at the same time. This isn't the best display of their chemistry, but the lyrics sure are.

Come on, where is the chemistry here? They both look bored — and slightly uncomfortable. Considering the vibe in the rest of these photos, this must have just been snapped at the wrong moment.

She may be dancing next to him, but Queen Bey is definitely holding her own.

She looks so proud of him that she can't help but smile on stage.

Once again, these two are chilling courtside. But let's be real, I doubt they're paying any attention to the actual game.

Once again, sports and smiles. But the best part of this picture? A cameo from Kim Cattrall. I wonder how excited Bey was, considering the "'03 Bonnie & Clyde" lyrics imply she's a big fan. ("Only time we don't speak is during Sex and the City.")

If I was a body language expert, I'd have to say that this pose shows security in their relationship and his desire to not let Bey go.

You know it's serious when she's staring at her man, instead of her snack.

They look genuinely so happy to be together.

Their chemistry radiates off the stage.

In this video, they literally morph into one another. Bey lip-syncs Jay's verse in the beginning and later on in the song. So, this means they're basically becoming the same person, right?

If you're happy and you know it, clap your hands.

In this track, it starts with them joking around and talking directly to one another. It shows a new level of comfort between them that wasn't necessarily there in the previous videos. By this point, they're secure and sure of their connection.

One final courtside shot, because I'm almost certain these two love attending basketball games just as much as they love each other.

That last picture is from 10 years ago, but the chemistry continues to this day. Long live, #BeyZ.