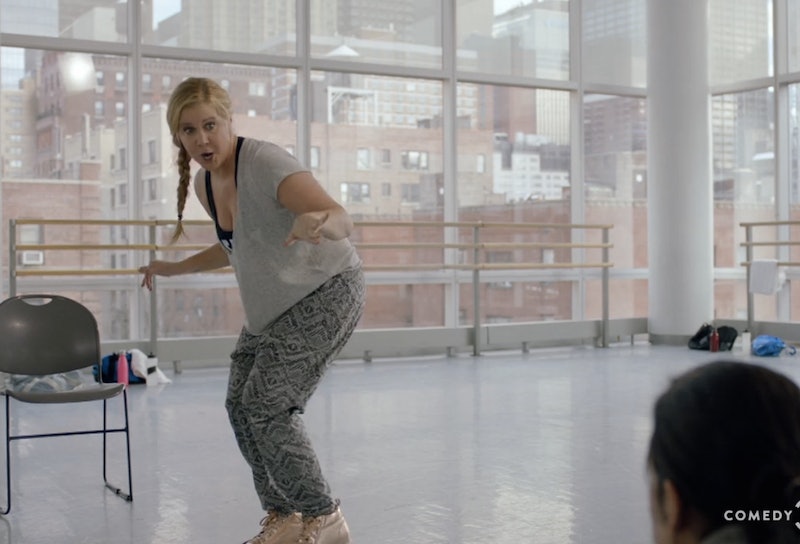 Hit Broadway musical Hamilton has brought in an influx of crazed devotees, obsessed with the marriage of history-turned-on-it's-head and hip hop... and one of those devotees has decided that, well, she can do that. You've probably already heard that wholesome girl-next-door Amy Schumer is a fan of Hamilton , having both seen the show at least twice and famously dropped a $1000 tip to the Hamilton bartenders back in March. So it was only a matter of time since Schumer made her own Inside Amy Schumer Hamilton spoof, Betsy Ross . And if that doesn't sound exciting enough, let's just say there's botched twerking, Taylor Swift covers, and an appearance by Hamilton creator and star Lin-Manuel Miranda.

Actually, you can credit Amy Schumer's sister and Inside Amy Schumer Kim Caramele for this one. According to Schumer, Caramele's own obsession with the play had led her to "put the soundtrack on at any, sometimes inappropriate, time." One day, Caramele was found reworking "My Shot" into "I'm not throwing away my mop," and, from there, inspiration struck hard. All that was needed to make the sketch perfect was Miranda, who happily complied. "He couldn’t have been nicer and more game," Caramele told Entertainment Weekly. He has so few hours free! I was so grateful he was there."

This all eventually blossomed into a sketch where Schumer pitches a Hamilton follow-up to Miranda. While Miranda's play follows the life of Alexander Hamilton, Schumer plans to capitalize on his formula by focusing on another prominent American figure — you guessed it — Betsy Ross. And, although Schumer mucks up the name in the beginning (she calls her "Bethany Ross" and Miranda points out she's mixing up a "historical figure with a real housewife"), it sounds like a stellar plan otherwise.

The game plan for Betsy Ross includes a first Act that lasts 30 seconds long and a bunch of pop songs mixed in with references to flags and waving. Obviously, Schumer has designs on playing the lead role, and her wonky dance moves and generalized tunelessness makes her a surefire fit for the role. Caramele even gets in on the action, appearing in a colonial garb and completely dead face as "Karen Her," Betsy's nemesis. Weirdly enough, Miranda remains unimpressed and eager to catch his Uber out of there, even when Schumer brings out the big guns and puts Questlove on drums.

Hamilton and Inside Amy Schumer fans alike should be able to appreciate the veritable hot mess performance that Schumer brings to the table. Suffice to say, once she gets the mop out, you know she's not kidding around. But don't take my word for it. Watch the video below to see what will inevitably become a Tony Award-winning masterpiece.