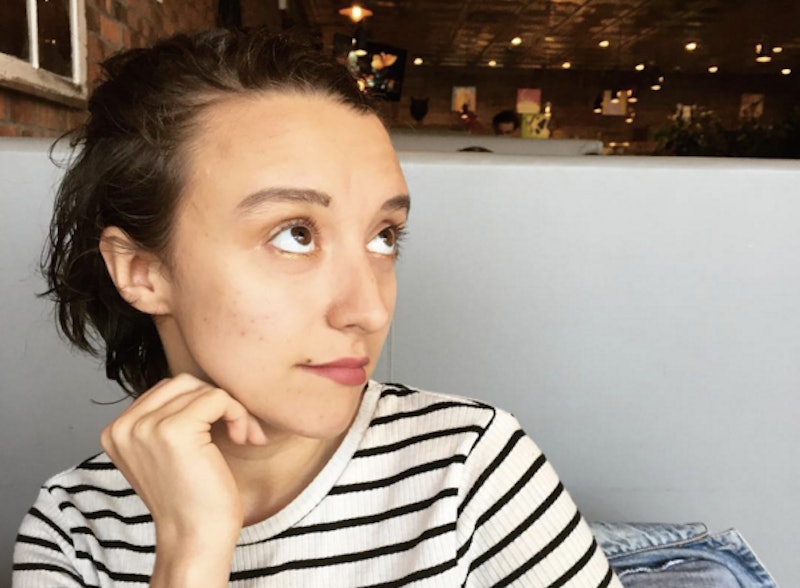 With peak bikini season just a couple of months away, many concerns that I'd begun to let go of during the winter have creeped up again. I'm not worried about showing off my glorious stretch marks or my belly fat. My concerns lie further south. I've been rocking a full bush since high school, when my pubes grew out enough to flaunt a generous head of hair down there — an aesthetic that I've always found appealing. But as I grew older and more jaded, I quickly discovered that not everyone thought my pubic hair was pretty and, in some circles, I was pretty much the designated weirdo for having a "the hairier, the better" outlook.

I love my bush very much, and take great in pride in it in the bedroom as well as when admiring my nude form in the mirror. My thick, dark and curly pubes generally make me feel incredibly sexy. That is, until I'm in a bathing suit.

My bikini line is anything but tame, much like the rest of my body hair. Most people around me have been able to silently accept my fuzzy pits and legs (even my more conservative parents don't bother me about it anymore). However, when it comes to my bikini line, spectator opinions seem to endlessly rain down upon me, many in the interest of allegedly "saving my dignity" or reputation.

Of course, nothing about my pubic hair should make me feel less dignified or comfortable in my own skin. And overall, I feel pretty confident as a hairy human. Yet somehow, come bikini time, my pubes are framed by loved ones and strangers alike as something that should be a source of embarrassment. Some folks have even expressed offense over my fuzzy appearance, for reasons that were never fully articulated to me beyond the words "disturbing" or "inappropriate."

Members of my family have described the look as "messy," and indicative of poor hygiene. And as the person in my shared campus apartment with the most generously bushy bikini line, I'm the only one who earns negative feedback for walking around in my underwear.

In comparison to areas generally considered less sexual, like my legs or underarms, my pubic hair is most highly criticized. Nudity, especially regarding feminine bodies, is still highly stigmatized in contemporary culture. And for that reason, it's as though the hair on my groin is never allowed to go undiscussed.

The disapproval of others surrounding the way I maintain my bikini line is palpable to me when in public, at the beach, and even in my own house. At times, I subsequently feel inclined to cover it up. I love my pubes, but I'd rather not have to blush quite as much at the beach, dodging the glances of judgmental people peeping at my bikini area with so much concern on their faces that you'd think a small animal might have climbed into my bottoms.

I sometimes forget that a part of having the "bikini body" that mainstream media wants us to embrace so hard also includes expectations about body hair removal. So much so that choosing not to shave my bikini line for a beach day seems to be considered an even worse offense than proudly displaying my tummy rolls or the stretch marks on my hips. So yes, I sometimes give in and shave said bikini line just to avoid the frustration of unsolicited criticism and nonconsensual ogling by random humans. But in those moments, I feel like I've lost.

That's not because shaving is a bitch to my sensitive bump-prone skin, but because I allowed myself to bend my beliefs in accordance to what others think of my body. And changing yourself for others — hiding parts of your body, whether they're conventionally beautiful or not — just doesn't foster body positive feelings, at least not for me. As someone who prioritizes radical self acceptance and visibility, shaving makes me feel like a hypocrite.

I want to proudly rock my pubes this summer, with no bikini line compromises. They make me feel sexy and confident, and there's no reason I can't show off my fuzzy bikini line in the same way that so many masculine people rock their adorable happy trails in swimsuits. People are entitled to their opinions and preferences, but so am I.

Instead of apologetically covering up my perfectly natural, perfectly gorgeous pubes the next time someone says something, I hope to use my cute pelvis to make them confront their internalized (or not-so-internalized) stigmatization. If anyone wants to deem my body hair maintenance un-sexy, unladylike, offensive, or inappropriate, I can choose not to engage or care.

I love the way my pubes peek out, tickling my bikini bottoms. I like the way they create more volume in my pants. Having our bodies policed just isn't acceptable. But based on my past experiences, people are less likely to actively police us when we project unapologetic confidence.

More like this
Most Comfortable Underwear For Big Butts
By Audrey Williams
How Skin Care Experts Are Stepping Up To Support Transgender Patients
By Audrey Noble
42 Black Owned Fashion & Beauty Brands To Support Today & Always
By Mekita Rivas, Shea Simmons, Kui Mwai and Dominique Norman
11 Graduation Guest Outfit Ideas To Wear To Someone Else’s Ceremony
By Phoebe Avison and Claire Fox
Get Even More From Bustle — Sign Up For The Newsletter