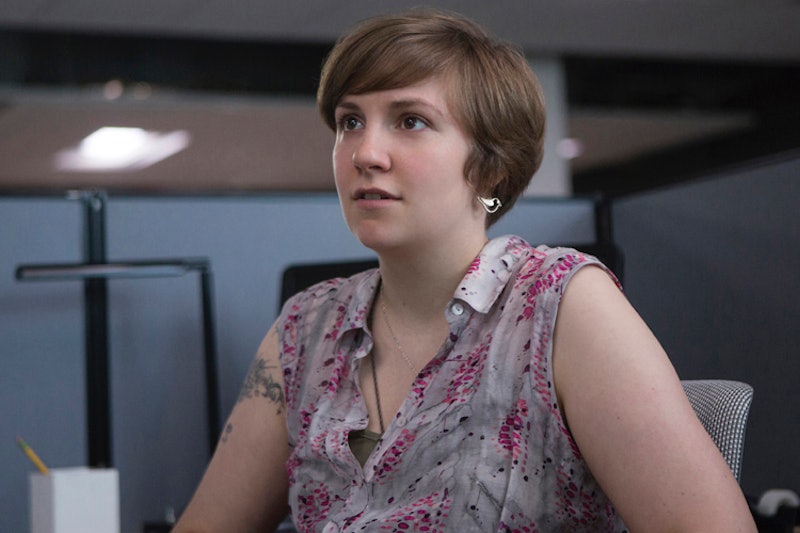 Surely, the Internet is stirring with heated discussion about last night's episode of Girls . Staff members at GQ even addressed the episode (naturally, it took place in their headquarters). While I wholeheartedly related to Hannah's investment in her new job because of its of free snacks (and I'm sure we all do. Who isn't even slightly motivated by free food? No one. I rest my case), there was something that I couldn't stop thinking about.

In last week's episode, we watched Hannah's dreams fall to the predictable level of shit, when she learned that her former publishing house possessed the rights to her book for a total of three years, meaning her real-live-you-can-touch-it book deal (do they MAKE those anymore?!) wouldn't be coming to immediate fruition. While I balked slightly at how a no-name with one substantial credit (the coke piece for a blog) was receiving a memoir deal with the party favor of a comparison to Mindy Kaling, I didn't care too much because I still love the show and get that it's all one big fantasy. I don't go to it to remind myself what living in New York is like; I watch it for an alternate universe.

So when we discovered that she received an offer to write for GQ's advertorial team, I couldn't help but think, sweet mother of balls. That's one good fucking job. Rest assured, Hannah is now dealing with the eternal question of am I a writer if I'm not writing my own material? and as a writer (look! I wrote this!), I'm going to say, yes. I'm also going to say, provided Hannah continues to work at GQ (which I doubt she will, given how depressed she seems in the cubicle) ,how much her life would change — and how much all of Girls would change.

For those who don't know, GQ is a part of Condé Nast, an empire of print magazines. To work at a Condé Nast magazine, for many, would mean reaching the pinnacle of a print journalism career, not the end of an era. It is notoriously difficult to get a job at a Condé Nast publication (and they include Vogue, Vanity Fair, and The New Yorker); it's even notoriously difficult to get an internship there. So the fact that Hannah out of the blue received an offer to work for an enormous magazine is indicative of two things: 1) that she possesses an inordinate amount of talent, and 2) that, yet again, this is not real. Because for anyone struggling, it's not just about the free snacks. (And for the record, GQ has SunChips, but not lox — as noted in their response.)

Hannah has just turned 25, which means that she soon will need health insurance or that we're going to have to watch an episode in which she signs up for Obamacare. Working at Condé Nast, according the company's website, would provide her with health insurance — we're talking medical, vision, dental, the whole thing. She'd get a 401k, a 529 plan, so if she and Adam ever have kids, they could go to college, life insurance (consider all that talk about death!), holidays, vacation days, and child care if she ever drops a baby. A Hannah with benefits, would of course not be the struggling "girl" with whom viewers have a love-hate relationship. A Hannah with benefits would be able to afford that apartment, and would maybe start a fight or two with Adam for not working up to his potential (she alluded to this in last night's episode; his response was that he could sell stuff on Etsy because "people are fucking stupid").

The tension of the artist-type who gets a job and and the artist-type who won't would undoubtedly come to the surface considering Hannah's personality would probably make her prone to bringing up Adam's inadequacies. Glassdoor.com reports that a sales associate receives, on average, a salary of $37,000 to $40,000, and that a copy director (someone at the top of a creative advertising team) receives on average between $115,000 and $124,000, which would leave a staff writer (either advertorial or editorial) making somewhere in between, which is, above and beyond what Hannah would make at Ray's.

There's room for growth, too; some editors in chiefs make roughly a million (or at least they did, back in 2005 when New York Magazine released some folks' salaries). These are not numbers to be dismissed; they'd be game-changers. She'd officially be the caretaker in the relationship, setting the relationship off balance. The two both do not have their careers together, and there's a symbiotic relationship that comes out of that. The dynamic of Adam and Hannah could potentially change. Not to mention, think of all of the art projects Adam could make while Hannah is at work for ten hours each day.

However, the choice to make the magazine a reputable one has to be intentional. Working at GQ is, by far and large, an accomplishment for someone even remotely interested in print journalism and could completely shape the direction of one's career. Of course, a girl on Girls with direction would not be the point of the show. We're supposed to feel some sort of response to the philandering nature of these women, who pretend to be so confident in their choices.

In fact, my astonishment at her easy dismissal of working for GQ is what was probably supposed happen; Lena Dunham is purposefully pushing our buttons. Hannah's ability to completely gloss over how having a full-time job at a magazine is an important stepping stone, if not milestone, is just so Hannah, and just so Girls, and I believe that we're supposed to recognize that character flaw. I don't think we were supposed to turn off the episode questioning the value of writing a novel; of course to any artist it is vital to create art, and that should not be dismissed. But I am almost confident that we were supposed to recognize that sometimes, in our most self-involved moments, we may be tempted to turn our noses up to things that could potentially help us out of fear that the direction we think we have may be incorrect.

Or we could just open up shops on Etsy, because, you know, people are fucking stupid.

More like this
Is Blake Lively Or Penn Badgley The Richest 'Gossip Girl' Star From The OG Series?
By Hugh McIntyre
Silvio Scaglia Is Wealthier Than 'My Unorthodox Life' Star Julia Haart
By Radhika Menon
What Is Julia Haart’s Net Worth? The My Unorthodox Life Star Is A Shoe Mogul
By Radhika Menon
Rita Ora’s Empire Is Fifty Shades Of Impressive
By Darshita Goyal
Get Even More From Bustle — Sign Up For The Newsletter