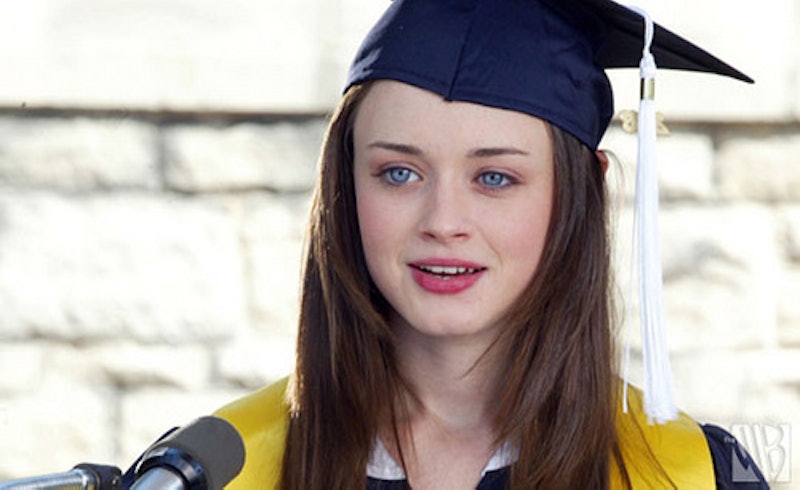 Big news, Gilmore Girls fans. On Monday, pictures were posted to Instagram of the Chilton set, which suggests that we may see more from the school in the upcoming revival. And while these photos have me asking all kinds of questions about why Chilton will be featured in the four-part series, the one thing that keeps sticking out in my mind is that Rory has to have something to do with it. Could it be that Rory is teaching at Chilton these days? While everyone else is so concerned with her love life in the new series, the one thing I really want to know is what she’s doing professionally. For a girl who was always whip-smart and super motivated, the world really is her oyster. Rory Gilmore could be doing anything these days, and teaching at Chilton is definitely a possibility.

The school is her her alma mater, after all; where we saw her at the start of the entire series. Paying for Chilton was the thing that brought Lorelai back in touch with her parents, getting all the Gilmore girls together again after a decade and a half of not speaking. So it makes sense to me that this location would be honored in the revival. But could it play a bigger part than anyone ever thought?

I think it’s possible, especially since Rory has extensive experience in a number of different realms, which could be put to use in a teaching gig. I mean, the last time we heard from her, she was running off to report on the Obama presidential campaign. Couple that with her extensive editorial work at The Yale Daily News, and she could be teaching anything from journalism to political science.

Besides, as an alumna, a graduate of Yale, and a local celebrity (who else had an entire town come out to celebrate their going away when they graduated from college? Answer: no one), she’d be a shoo-in for the position. And honestly, with her amazing education, her absolute patience in the face of running a daily newspaper (and dealing with Paris for seven years of her life), I think she’d make a phenomenal teacher. And if that keeps her close to Stars Hollow and Lorelai, then so be it.

Plus, can you imagine how amazing it would be to have Rory Gilmore as a high school teacher? Dream your Gilmore Girls dreams!