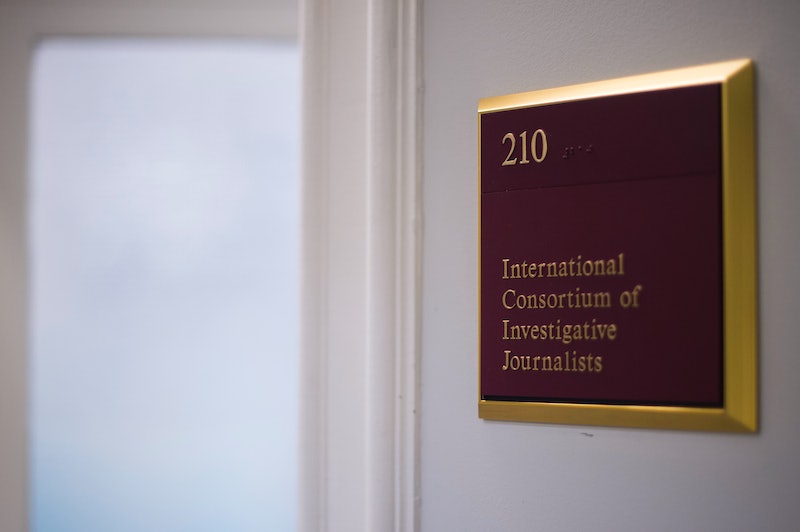 A total of 108 media outlets around the world released coordinated stories on the Panama Papers in a global news drop that left much of the world stunned Sunday. The Panama Papers, if you haven't heard by now, are a collection of 11.5 million leaked documents detailing the alleged offshore holdings of a dozen current and former world leaders, along with more than a hundred other politicians, businessmen, criminals, and celebrities. Sunday's leak quickly became an example of why investigative journalism is so important. So, who are the journalists behind the Panama Papers?

Who do you call for help when you have 2.6 terabytes of data to sift through for what could potentially be the biggest leak in whistleblower history? That's what Bastian Obermayer, a reporter for German newspaper Süddeutsche Zeitung, found himself wondering in 2014 when an anonymous source reached out to him regarding a massive collection of documents from the Panama law firm Mossack Fonseca containing information on the identities of shareholders and directors for more than 214,000 offshore companies, some of whom are allegedly linked to world leaders, politicians, public officials, billionaires, and celebrities. Obermayer turned to the International Consortium of Investigative Journalists (ICIJ), which has a history of coordinating tax haven megaleaks, for assistance.

Mossack Fonseca has denied any wrongdoing and accused the ICIJ of having "presented and interpreted" the documents "out of context." Ramon Fonseca, the company's co-founder, told CNN the information made public contained many inaccuracies and that "in many of the circumstances" the parties cited by the ICIJ "are not and have never been clients of Mossack Fonseca." The firm told the ICIJ they would "not hesitate to pursue all available criminal and civil remedies" for their use of "unlawfully obtained" documents.

For over a year, the ICIJ organized and assisted more than 400 reporters in secretly analyzing the massive amount of data released by Obermayer's anonymous whistleblower. The ICIJ built an authentication-protected search engine for the leaked documents to enable journalists from news outlets the world over to access, review, and even chat about them in an effort to further global collaboration in reporting on this story, Wired reported. This is part of what the ICIJ does — assist journalists around the world with their investigative reporting by providing the resources, technological tools, and, in some cases, the computer-assisted reporting techniques they might lack.

"This is the biggest cross-border investigation in journalism history, using a data set that is the largest of its kind," ICIJ Director Gerard Ryle said in a post about the release of the Panama Papers on the Center for Public Integrity's website. "Collaboration with media partners around the world allows us to expose a bunch of secrets — in depth. There is no way any individual reporter or media organization could have done this."

Founded in 1997, the ICIJ is a Washington, D.C.-based global network of close to 200 investigative journalists hailing from more than 65 countries. The ICIJ is part of the Center for Public Integrity and was established by Chuck Lewis in an effort to expand on the watchdog-style journalism being done by the Center for Public Integrity. According to the ICIJ, its aim is to "be the world's best cross-border investigative team" by promoting collaboration over rivalry in reporting on things like cross-border crime and corruption.

The Panama Papers appears to be the fourth tax haven leak coordinated by the ICIJ since 2013. It released data allegedly revealing the names of individuals and entities accused of hiding assets in offshore tax havens in the spring of 2013, followed by the release of documents naming some 340 corporations that had reportedly struck secret deals with Luxembourg in 2014 that may have helped them slash their taxes. Many of the named companies declined to comment or said only that they adhered to the laws of every country they operated in.

Last year, the ICIJ also published leaked information from 2006 to 2007 regarding the activity of Swiss bank accounts at HSBC that belonged to individuals allegedly connected to criminal activity. In its response to the ICIJ's analysis, HSBC said it "[had] undergone a radical transformation in recent years" and "has implemented numerous initiatives designed to prevent its banking services being used to evade taxes or launder money."