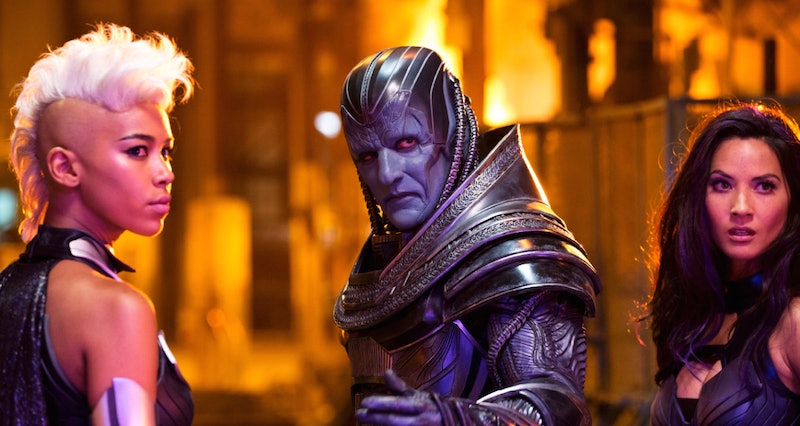 Get ready for a whole new kind of villain, because the new X-Men: Apocalypse teaser was released on Monday, and it showcases the fact that this movie’s villain is more terrifying and more dangerous than anyone that has come before. In previous trailers, audiences have gotten a taste of what the X-Men are up against in Apocalypse, but it has only been a small bite. In this most recent teaser, the villain and all of his terrifying powers become even clearer. And let me just tell you, this villain is more powerful than anything we’ve seen before.

Unleashing a new villain for another installment of X-Men is par for the course, but in this teaser you can tell that the mysterious new villain is actually the first mutant who ever walked the earth. That’s right: He’s the OG X-Man, which I can only imagine makes him a little less refined and a little more out of control than all of the other mutants who came after him. Like an X-Man but with serious bugs. Not a good sign for those who want to fight him cleanly. Especially since this means he’s one of them. So you know what that means: similar strength and power.

But even worse than that is his proximity to the good guys is the fact that he is apparently more powerful than all the other mutants. In the teaser you can see more clearly that this villain has what looks like complete control over the other X-Men. He appears to be able to manipulate them physically and even mentally. So how are they going to defeat him if he can control their every move?

Who the heck knows.

But defeat him they must, because in this featurette it’s also revealed that this villain doesn’t have small time goals for his power. No, instead, he’d like to wipe out all of humanity. You know, just another thing to check off the ol’ villainous to do list.

So if humankind has a chance at making it through this movie in tact, it’s going to take some very strategic thinking on the part of the X-Men to figure out how to beat him. And with his having incredible strength and power that makes theirs pale in comparison, it could be a brutal road to finding a way to defeat him.