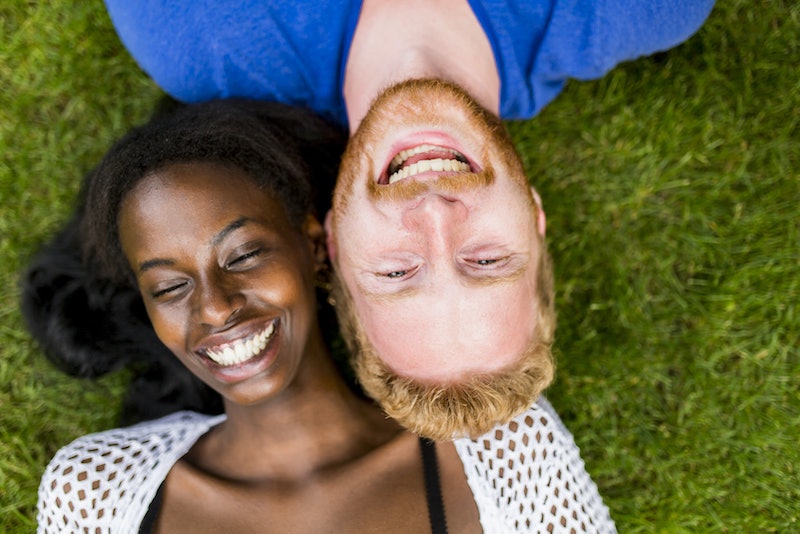 Things never to rush: Cooking eggs. Baking cakes. And, of course, relationships. You cannot, I repeat, cannot (I really don't think I could stress this too much) rush things in a relationship. You can't go from zero to 60 without someone getting hurt (and possibly whiplash). I know plenty of us are tempted, because all of the best feelings arise when you first get involved with someone, and it's hard to resist jumping in full throttle, but if you do, there's a good chance you'll wind up burned — and it's even possible that you'll burn the whole relationship to the ground. You don't want to be standing there looking at the ashes, wondering where you went wrong. Hint: If you hurried through certain aspects of a partnership, you probably started to go wrong somewhere around the time you started rushing.

But this can definitely be avoided. I spoke with a bunch of experts about the things that should never be kicked into overdrive in relationships, and they were very forthcoming about exactly what to be on the lookout for. They said there are some parts of relationships that should never be fast-forwarded, and if you felt drawn to the idea of being super go, go, go about stuff before, you might change your mind.

1. Don't Rush Deciding If You're With "The One"

"If you meet someone and automatically think they are 'the one,' you risk idealizing them and minimizing differences," relationship coach and therapist Anita Chlipala tells Bustle. Instead, let it unfold. See where it takes you. You can't possibly know someone until at least a year or two in. "Also, infatuation lasts, on average, about 18 months," she says, "so it’s normal to think your partner is awesome, especially in the beginning."

Wait it out. This isn't to say that you'll automatically start hating on your partner after 18 months — oftentimes you'll feel even stronger as the months pass — but see what happens, and remain open. Before you make any decisions about whether the person you're with is "the one" or not, "I encourage people to have the important conversations in a relationship — money, sex, children, religion, etc.," Chlipala says. Find out if you're looking at any dealbreakers before you start thinking of putting a ring on it. "You want to find someone who will respect your viewpoints, even if they are different, and work on a compromise where both partners are still satisfied," she says.

2. Don't Rush Spending Lots Of Time Together Right Away

"Although I believe nothing should be rushed, the bigger snag is time," zen psychotherapist and neuromarketing strategist Michele Paiva tells Bustle. If you've only been together a few months — or even a year — there is no reason to pressure your partner to spend every single day together. "If your partner is not seeking to spend time with you, then trying to rush desire to spend time together is about as toxic as can be," she says. "It's like Pepé Le Pew from the cartoons," she adds. "Just a mess!"

Once you are spending tons of time together, quality time becomes something that you want to go slow and steady with. "Whether it’s pillow talk, dinner conversation or time on the couch while watching TV, give yourselves plenty of time to talk about what you think and how things are going," Tina B. Tessina, aka Dr. Romance, psychotherapist and author of Love Styles: How to Celebrate Your Differences , tells Bustle. Quality time to talk is vital, she says, and once you are regulars on each other's daily playlists of life, you want to be sure that the time you spend together isn't just "hi," "good night," "good morning" and "bye." Find a serious chunk of time each week to just be together — talk, don't talk, whatever. Just be.

With someone who isn't ready to drop the L-word, and you feel as though you are? "You should not view it as a rejection, you may just work on different time clocks and be at different places," Martinez says. If your partner isn't quick to say those three little words, they might simply be treating it with the seriousness it warrants, she says. It's a good thing if you're with someone who isn't going to just say it back to you because it is what you want to hear. Give it time and space.

5. Don't Rush Moving In Together

"Don’t move in together too quickly, or simply because of financial stress," New York–based relationship expert and author April Masini tells Bustle. When you make the choice to move in together, you take your relationship to the next level, like it or not. "Living together is a big deal, and just because you’re not married doesn’t mean you don’t have a commitment by moving in together," Masini says.

"Moving in together creates a lot of pressure for a new relationship, and has extreme consequences if it doesn't work out," agrees life coach Kali Rogers, who tells Bustle, "You could lose thousands of dollars, fight over personal belongings, and get in trouble with landlords, etc., if things go south." Not good. Not good at all. The moral of this story: "Always wait at least a year before moving in with someone, to be sure the relationship is stable enough to last under the same roof," Rogers says. Smart.

If you're ready to move in with your partner, you'll know. Until then, don't jump straight in. "Living together can put pressure on a relationship that would have flourished otherwise, but was too new for all the responsibilities that come with a living together situation," Masini says.

You can't speed up trusting one another, clinical hypnotherapist, author and educator Rachel Astarte, who offers transformational coaching for individuals and couples at Healing Arts New York, tells Bustle. "I don't care how well-adjusted you are, it takes time for a human being to earn another human being's deep trust," she says. "If you expect that bond to happen immediately, you will likely be disappointed." Instead, remember that it takes a long time to earn mutual trust with new friends too. "We all come to relationships with our baggage and life wounds," Astarte reminds. "Be loving. Be open to give yourself without fear of judgment, but also be open to receive your partner without judging." From there, anything is possible.

"Especially when it comes to emotions and feeling unhappy, many of the underlying thoughts and feelings take a while to bubble up," Jansen adds. So don't jump all over your partner while you have your talk. If long silences happen, let them occur. "While silence can be uncomfortable, it also enables layers to unravel," Jansen says. Try grabbing a coffee and taking a walk while you talk. "Walking while you chat can sometimes allow for those uncomfortable silences to feel more bearable as you sip your coffee and look at the trees, rather than in your partner's eyes for minutes on end," Jansen adds.

"Believe it or not, commitment is the one thing that you should never rush in a relationship," dating expert Noah Van Hochman tells Bustle. Just because you have some extra clothes at your partner's place doesn't mean you should be all in right away. "Leaving your toothbrush in someone’s apartment is not the same as leaving your hopes and expectations there," he says.

"This does not mean that you should go out and date around or have multiple partners," Van Hochman clarifies. "It merely means that you should take your time before your actions signify that the person you are with is without a doubt the one you envision your future with. Let things happen at their own pace and don’t push anything that may take time." You don't have to be dating 20 people or be unfaithful by any means. Just don't make up your mind all the way. Like Chlipala, Van Hochman thinks it's best if you keep an open mind and let the jury be out on the relationship for a long while. "Solid foundations come before anything worthwhile can be built," he says. First focus on building your partnership. The rest will follow if it's meant to be.

This should go without saying, but since people do it every day, it shall be said: Don't rush marriage. "No good ever comes from this," warns Martinez. If you really, really want to get married, just be patient. Do not even think about trying to pressure your partner into it. Pushing your partner or giving an ultimatum about marriage is tempting fate, she says.

And trying to get a proposal from your partner is just a bad idea. "Don't you want the person to do this of their own free will because they have decided they want to be with you forever, versus fearing they will lose you if they do not speed up their personal comfort level and do it?" Just relax and enjoy the ride.

More like this
The Best Time To Date After A Breakup, According To Experts
By Bustle Editors
20 Things You Should Never Tolerate In A Relationship
By Rachel Sanoff and Kathleen Ferraro
7 Women Share Their Best Orgasm Stories
By Lexi Inks
Expert Tips For Being On Top When You're Plus-Size
By Lexi Inks
Get Even More From Bustle — Sign Up For The Newsletter