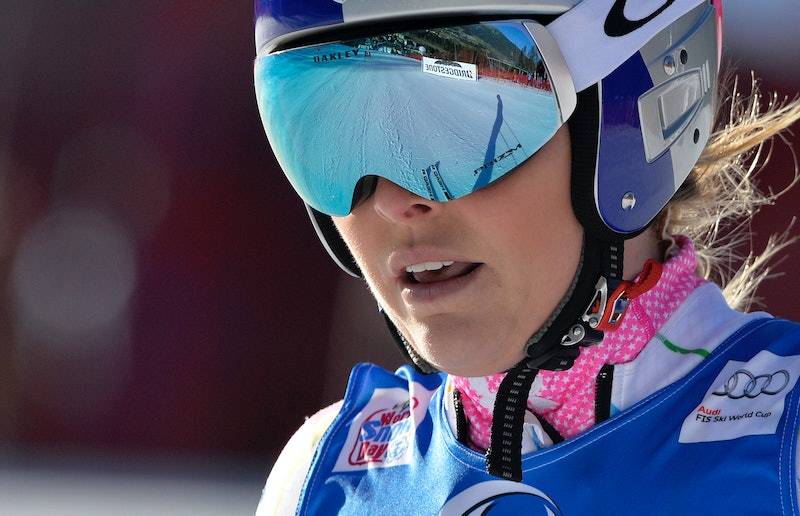 With an Olympic gold medal, four World Cup overall championships, and the all-time record among men or women for World Cup crystal globe titles American alpine skier Lindsey Vonn has a lot to be proud of. But the speed queen doesn't plan on slowing down anytime soon. "Skiing is my passion," 31-year-old Vonn tells Bustle. "It's what I love, and all I want to do is continue doing that." The notoriously competitive skier recently revealed she's hoping to race for three more seasons, during an appearance on fellow Olympian soccer star Abby Wambach's new ESPN radio show.

Fittingly, Vonn wants to go out with a bang. The alpine skier is hoping to eventually end her career with one final hurrah — a race against the men.

With 20 World Cup titles and 76 individual World Cup victories, Vonn has easily become known as the most successful female ski racer in the world. Her career highlights read like a list of shattered glass ceilings in sports: She is one of only two women to win four World Cup overall championships, and her latest World Cup crystal globe title pushed her past Sweden's Ingemar Stenmark to give her the all-time record for globes won among both men and women.

Even Vonn is sometimes in awe of all she's accomplished. "It's hard for me to actually realize that I've accomplished that much," Vonn tells Bustle. "I think maybe, after my career, it will all sink in."

On top of racking up records, Vonn has been using her success and athletic power to spread an inspiring message of girl power. "I feel really lucky," she says of her success. "I think it's also a great opportunity for me to share my experiences with other young women."

To help the next generation of girls grow up empowered, Vonn started the Lindsey Vonn Foundation in 2015. Through her foundation, Vonn aims to inspire girls to follow their dreams by helping them build confidence and self-esteem. "I've been inspired by many other athletes who have broken the ceiling for women in sports, and I think we're all trying to get better and to inspire the next generation," Vonn says. "I hope, that what I’m doing inspires someone else to follow their dreams and continue to work hard."

In fact, it was a hope of inspiring other women that prompted Vonn to pose for Sports Illustrated's 2016 Swimsuit Edition. Vonn posed along with Caroline Wozniacki and Ronda Rousey wearing nothing but body paint in hopes of spreading the message that strong is beautiful.

It wasn't a decision Vonn took lightly. The alpine skier hadn't posed for Sports Illustrated since 2010, when a cover she did for the magazine's Vancouver Olympic preview edition stirred up serious controversy after some found her pose — a traditional ski position — provocative and overtly sexual.

"I thought, well if [Wozniacki] is going to do it, it could be a pretty great message: strong, athletic, powerful women in Sports Illustrated," Vonn says. News former UFC Women's Bantamweight Champion Rousey had also signed on "was just the cherry on top" for Vonn. "She's so strong and so incredible," Vonn tells Bustle. "To be doing it with all of them was an honor."

With her blonde hair, killer smile, and powerful physique, Vonn is also undeniable proof that female athletes can be dynamic and muscular while at the same time staggeringly beautiful. Although Sports Illustrated is often criticized for focusing on the sex appeal of women's bodies, Vonn and the other female athletes featured in the 2016 swimsuit edition sought to use the magazine as a platform to spread their own message about beauty ideals.

"I think we all proved that strong is sexy and we’re all beautiful in our own way, especially with Ashley Graham on the cover," Vonn says. "For all of us, that was pretty incredible. I think we were a part of something really special this year."

Sports Illustrated seemed to agree. "Beauty is not cookie cutter," Assistant Managing Editor MJ Day said back in February when announcing the edition's cover models. "Beauty is not 'one size fits all.' Beauty is all around us and that became especially obvious to me while shooting and editing this year's issue."

For a woman who spends much of her life speeding down mountains at around 80 miles per hour, Vonn was initially a little nervous about forgoing a swimsuit to appear in the pages of Sports Illustrated wearing only body paint. "I didn't know about the body paint until after, so I was a little bit shocked by that," Vonn tells Bustle. But the skier was determined not to let the idea of appearing next to naked in a popular magazine from participating in something so monumental.

"It was definitely an interesting experience," she says. "It was a challenge for me to be comfortable with myself and who I am and my body to be able to do something like that."

Like many female athletes, Vonn's body has often come under heavy public scrutiny. Debate over whether she's too heavy, too thin, or too sexy has followed Vonn on the ski slopes and in the media, regardless of her lengthy list of championship wins. Such dissection can shake the confidence of even the most fearless but Vonn has somehow managed to take it all in stride. "I just realized now more so than ever that I'm comfortable with who I am, and what I am, and what I look like, and it doesn't really matter what anyone says," Vonn says.

Vonn, who is aiming to compete in the 2018 Winter Olympics in South Korea, credits age with helping her build confidence despite continually serving as a popular topic for public discussion. "You learn about yourself every day and every year and you get wiser and hopefully more confident. I feel like I'm in a good place right now."